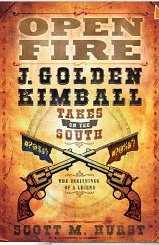 I review fiction books, not non-fiction, but I’m reviewing Open Fire, J. Golden Kimball Takes on the South by Scott M. Hurst since it falls somewhere in-between fact and fiction. Actually what most people know about the “swearing General Authority” falls somewhere between fact and fiction, as stories about J. Golden are legendary. This book is a retelling of many of the incidents that led to Kimball’s mission, his two years as a missionary, and the subsequent three years he spent as mission president of the Southern States Mission.

Golden, one of four children born to Heber C. Kimball’s tenth wife, started out life in what is now the Capitol Hill area of Salt Lake City, but Heber’s death when Golden was just fifteen plunged the family into poverty and they wound up moving to Bear Lake where Golden and his brother Elias became cowboys. Tall and skinny to an extreme, Golden didn’t look like a cowboy though his style of dress and vocabulary proclaimed him one–as did his courage and determination. He was approaching thirty and considering marrying and settling down when he received a week’s notice of his call to serve a mission in the Southern States, a mission that then comprised fifteen states. It was also a time when missionaries traveled without funds and didn’t have a place of their own to sleep at night. They were dependent on the goodwill of the people, and in that post Civil War period there was very little of that.

Subjected to beatings, tar and feathering, insults, and in some cases, murder, the missionaries struggled to spread the word to a population brutalized by war and fed a steady stream of lies by self-aggrandizing preachers and others who felt a need to make themselves feel important. The Ku Klux Klan attacked the Mormons with impunity knowing the law would look the other way just as it did when black people were attacked. B.H. Roberts was the mission president and he and Golden became close friends after Golden nearly died of malaria.

Little time is spent on the brief period between his first and second mission, but in that period Golden married and fathered three children. When he returned to the South, it was to find little had changed there, but he had changed. Though he was still tall and skinny with a high pitched voice that too often used a vocabulary not suited to a church leader, his testimony was firm and his faith solid. He met every challenge head on, determined to protect his missionaries and stand up for the Lord.

J. Golden Kimball was never an apostle, but he was one of the Seventies presidents, which made him a General Authority. He never did learn to stop swearing, a flaw that was the source of many complaints sent to Church headquarters following his talks at various conferences. His flamboyant personality and salty tongue fed a legion of legends that have been told and retold about him; some are true. No one, however, doubted his commitment to God nor his courage to step up when danger threatened.

When telling the story of a real person, I find author intrusion particularly annoying both as the author presumes to tell us what the person was thinking and feeling, the little asides explaining what is about to happen, and the personal comments concerning events. There are plenty of these in this book.

However, I enjoyed learning more about a man of whom I’ve heard so much. I particularly enjoyed his sermon to the Chattanooga preacher’s congregation. The depiction of the South during the post Civil War years and the deep resentment of the people toward Northerners, the freed slaves, and anyone they perceived as a threat to the South they remembered was accurately portrayed. The casual writing style lends itself well to a story about a man who always remained a bit of a country bumpkin. By the end of the book I knew more about what J. Golden Kimball did, but not a lot more about him as an individual. I usually look for a plot arc in the books I review, but that doesn’t fit this sort of book, so suffice it to say I was never bored, often amused, and sometimes deeply touched by this man’s faith and I don’t hesitate to recommend Open Fire, J. Golden Kimball Takes on the South to others.

Since graduating from Brigham Young University, Scott Hurst has lived a nomadic life and has lived in several western states.