Suspense and Forensics in “Deadly Undertakings” 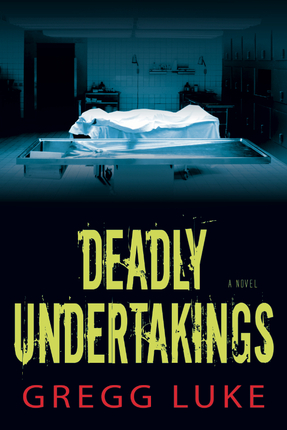 Gregg Luke’s newest suspense novel, Deadly Undertakings, is a nail-biter. I’ll admit I learned more about autopsies, embalming, and forensics than I wanted to know, but the science is fascinating and presented in a straightforward way that enhances the story without feeling sick or maudlin.

Rebekah Smith is an assistant to the Utah state medical examiner, Dr. Sandeep Mahesh, who is a close friend and father figure to her. She takes a personal interest in a centenarian who seemed perfectly healthy, but died suddenly in Tremonton. The body is sent to the state medical examiner’s lab in Salt Lake City, Rebekah is assigned to assist in the autopsy. When the autopsy reveals the woman was asphyxiated, her blood drained, then she was embalmed with a temporary embalming fluid before anyone even reported her dead, she contacts her boyfriend, special investigations officer, Josh Logan. He soon learns of a similar case in Washington County, right down to rare silver half dollars found on the victims’ eyes and a pure linen handkerchief covering the faces. When a third murder of a centenarian occurs in nearby Sandy, Utah, Rebekah and Josh combine their efforts to discover who is killing these elderly people, harvesting their blood, then preparing their bodies for burial as thought they were revered loved ones.

Both Rebekah and Josh have some unresolved issues in their own lives. They’ve been dating for two years and care deeply for each other, yet are hesitant to broach the subject of marriage. Both are dealing with guilt issues from the deaths of loved ones; deaths they know intellectually were not their fault, still they feel responsible. The centenarian mystery occupies most of their attention, but Josh is deeply involved in trying to resolve a cold case of a teenager presumably murdered by a gang. Rebekah is struggling with a fellow employee who attempts to force a relationship on her and her mixed feelings toward returning to school to further her career. Their investigation, coupled with their penchant for allowing their work to take over their lives, pushes them into danger beyond anything they might have imagined.

The characters are interesting and varied, giving the reader an assortment of personality types. Noticeable growth is seen only in the two main characters, but the sub characters are an interesting study of a broad cross section of nationalities, social values, intelligence, and backgrounds. Both Rebekah and Josh are good at their jobs, careful and precise in the way they follow clues and make decisions, yet each makes a serious mistake which seems minor at the time but places them in jeopardy.

The plot builds at a fast pace and maintains a high level of suspense throughout. There are times when the suspense is high because the reader knows what is going to happen and sometimes the action is a complete surprise. Some clues such as the coins on the victims’ eyes are obvious, easy to figure out, clues. Other clues are so obscure they are overlooked until the denouement.

Being a pharmacist with many medical and forensic connections, Luke, brings a realistic level of expertise to this medical suspense novel that give it a gripping element of reality. Both male and female readers will read this one with white knuckles firmly clutching the pages.

Gregg Luke was born and raised in California, attended three different colleges, then completed his degree at the University of Utah College of Pharmacy. He currently practices pharmacy in Logan, Utah. He is married and the father of three children. This is his sixth novel. Four of his novels have been Whitney Award finalists.