Big Laughs and a Big Heart in Big in Japan 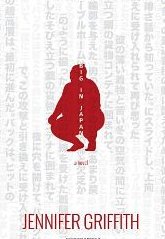 A fresh voice and an unlikely hero brought a smile on reading Big In Japan by Jennifer Griffith. Though the author is LDS, the story can’t quite be called an LDS novel, but it makes some strong points that are important to members of the LDS faith.

Buck Cooper is a statistician for a large company in Texas. He’s good at his job and pretty much carries his team, but his efforts are unappreciated both by his co-workers and the cute receptionist for whom he has a major crush. Someone is going to get a big promotion and some people are going to be laid off. Knowing how much of the load he carries, Buck isn’t worried about being the one to lose his job, and he feels reasonably certain he’s in line for the promotion and can’t help dreaming a little about the receptionist finally noticing him with the new status the promotion will give him. Of course, the receptionist has noticed him, has even begged favors from him. It would be hard not to notice a nearly 400 pounds man, but that isn’t the kind of notice he dreams of. Before the important announcement is made, his parents insist he must accompany them to Japan where his father’s medical breakthrough drug is being considered for acceptance. His parents whole future rides on this deal.

In Japan he attends a sumo tournament with his host’s teenage son and is surprised with the great respect the Japanese people have for these huge athletes and doesn’t know how to react when he is chosen out of the audience for a comic routine with one of the sumo wrestlers followed by an offer to train to become a sumo wrestler. At first he doesn’t take the offer seriously, but a call from the receptionist at his job back in Texas informs he not only didn’t get the promotion, he no longer has a job. Almost in shock he signs the sumo contract.

Training is much tougher than he imagined and he finds himself reduced to near slave status. It’s the hardest thing he’s ever done in his life. He falls for a girl he only sees briefly, rescues a businessman from sure death, carries an old woman up a flight of stairs, and only earns ridicule for adherence to his personal standards. Life is miserable, but he refuses to quit, not even when he discovers all is not as honorable in his new world as expected and that someone wants him dead.

Buck loses a hundred pounds in his struggle to get in shape for the grueling matches he faces, but he’s still far from the usual romantic hero. Still this book presents a touching romance romantic readers will enjoy. The heroine, tiny Chocho, shares Buck’s commitment to treating others with kindness, respect and standing firm for her principles. Both grow with the story, but the changes in Buck as he sticks to his principles, overcomes severe pain, and pushes himself to excel and beat the odds make him a real hero.

The dialog is fun and the big American’s adjustment to Japan is often humorous. Buck gains a couple of friends, also sumos-in-training, who are great characters. Most of the minor characters are distinct and greatly enrich the story. Griffith gives us a different picture of Japan than most of us have previously seen. This is not the cherry blossoms and tea houses version, but the crowded shops, strange food, political maneuvering, and grunginess of that country’s national sport. Murder, blackmail, and danger create an intense plot that will keep many readers on the edge of their chairs or burning the lights far into the night.

Though there is a nice romance included in this novel, I wouldn’t assign this one to the Romance genre. It’s more high action sports drama. It’s also a study in human ethics and has a broad appeal to men as much, perhaps more, than to women.

Big in Japan is Griffith’s fourth novel and draws heavily on the year and a half she served a mission in Japan where she grew to love the people and the language of that country. She grew up in Idaho and now lives in Arizona with her husband and their five children.