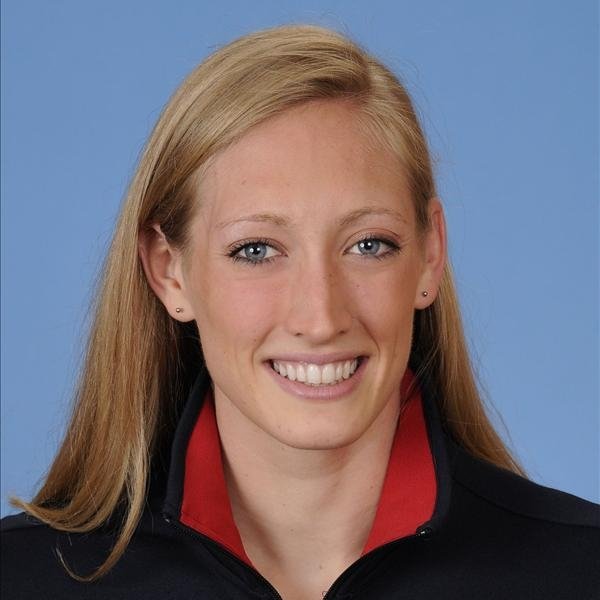 Larson grew up in Mesa, Arizona, and lived there through her freshman year of high school. Her family moved to Idaho, and she lived there with them for two years. Always an active athlete, she participated in volleyball, softball and track throughout high school. It wasn’t until her senior year that she began to compete in swimming.

A child from a large family, she knew if she wanted to go to college she would have to pay for it herself. She felt that a sports scholarship would get her there, and among the sports she paid, swimming was her best chance.

“I loved the other sports, volleyball, track, softball and all that but I figured swimming was my best bet, maybe I could get a college D-II scholarship that would help with money. Centennial High School in Boise, the coach was great, but swimming wasn’t a sanctioned sport, and I swam four hours a week. I realized if I moved back to Arizona and got on a club team I could swim four hours per day and that would help my chances a little more.” So while the rest of her family stayed in Idaho, Larson moved in with her Aunt Jeanette and Uncle Tom Fitzgerald in Arizona. “They were wonderful. They kept the food stocked that I needed and they let me use their car to get to practice every morning. I could not have made it through that year without their help.” Larson was a ?2010 graduate of Mountain View High School in Mesa, Arizona.

Larson was recruited to Texas A&M her freshman year and is now the first Aggie to make the Olympics in an individual event. She finished an impressive freshman season with four NCAA ‘A’ cut times as well as 4 school records. She scored 59.5 points at the Big 12 Championship meet with three second place finishes in the 100 breaststroke, 200 breast, and as part of the 400 medley relay (3:31.04), a 10th place finish in the 50 free (23.34), and swam a leg on the first place 200 medley relay which set a school record at the Big 12 Championship meet (1:36.62). She also set school records in the 100 breast (58.51) and the 200 breast (2:06.18) while earning runner-up finishes in both races at the NCAA Championships.

She just completed her second season swimming at Texas A&M. And though she has posted strong results it hasn’t always been easy or enjoyable. “Coming into Texas A&M as a freshman was intimidating,” she said. “I was terrified for my first practice, and I was really bad, and I’m still pretty bad at practice. I never trained at that level before. I started year-round club my senior year of high school (three years ago) and Steve Bultman (Texas A&M coach) gave me the biggest opportunity I could have asked for. He took a big risk recruiting me. I was the slowest kicker, and I probably moved backwards a little bit. All of the drills and everything, I was the last one to the wall and everyone had to be patient waiting for Breeja to come in so we could finish. After 2011 NCAAs, I decided I would give it another year, because it’s so hard. It’s so hard to do college swimming.” Prior to her strong result at NCAAs, she was contemplating not pursuing the sport.

At the 2012 United States Olympic Trials, Larson made the Olympic team for the first time by winning the 100-meter breaststroke ahead of favorite Rebecca Soni in a time of 1:05.92. Larson’s winning time in the qualifications was just .07 ahead of Soni, who has already won an Olympic medal and hasn’t been beaten in four years.

Larson qualified for her first Olympics by finishing first in the 100m breast at U.S. Trials in Omaha, the first major non-collegiate competition she had entered. The victory was significant because Larson’s result bumped Jessica Hardy out of the mix – Hardy had been the second-best 100m breaststroker in the U.S. behind Soni, who finished second behind Larson. Larson was also sixth in the 200m breast. As a collegiate swimmer at Texas A&M, Larson holds the national age group record for 17-18 year olds, in the 100 and 200 yard breaststroke events, set at the 2011 NCAA Women’s Championships. Shew won the 100 yard breast at the 2012 NCAA Championships and was third in the 200 yard breast.

In the Olympic 100m breast final competition on Monday, 15 year old Ruta Meilutyte of Lithuania, fastest in the semifinals Sunday, edged Soni by .08 seconds to win the gold medal. Larson took sixth in 1:06.96, slowest of her three swims here and more than a second off her 1:05.92 in the trials final. Larson was in second at the wall after her 50m split time of 30.85 seconds, a few tenths behind Meilutyte. Larson’s swim was hampered by a starting tone false start. The crowd, which included Larson’s parents and one of her sisters, cheered for her after the mishap.