Are you looking for some great fiction books for your age nine and older child to read during the summer? Look no further because for the next two weeks, I’ll be reviewing some great page-turners that your kids will love! The last book is an early chapter book for ages 5 to 7. 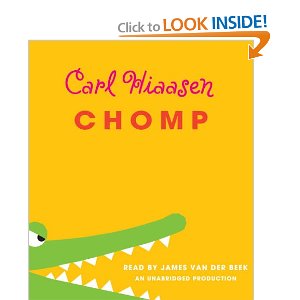 Chomps, by award-winning author Carl Hiaasen, is a funny and interesting story that takes place in the Florida Everglades. Wahoo Cray helps his wild animal wrangler father train and provide crocodiles, snapping turtles, snakes and more for a reality TV show. There are some humorous situations that Wahoo finds for himself, as well as more serious parts. For example, a girl who is running away from a father who drinks is a situation both Wahoo and his father deal with in the story. However, there are a few unnecessary mild swear words in the book.

Ice Island, by Sherry Shahan, will definitely cool you off in this summer heat as you read about ice and cold on a remote island off the coast of Alaska. Tatum and her mom have gone to temporarily help out with a lodge while Tatum’s dad works on the oil rigs inland from the coast. But Tatum gets much more than she ever bargained for when she and a friend get caught in a sudden blizzard while training for a dog sled race. Get ready for a page-turner! 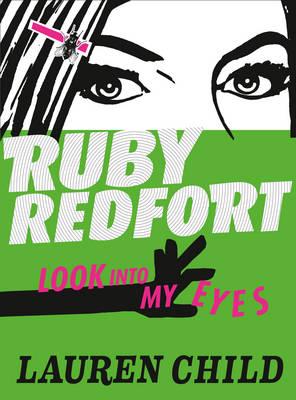 Ruby Redfort: Look Into My Eyes, by Lauren Child, is the first in a new series by this inventive, clever and humorous author. And yes, Ms. Child includes all her typical genius writing here. Ruby is much like the author. She’s terrific at code-cracking and mystery sleuthing and her observations will keep you awake throughout the night as you read to see “who done it”.

May B., by Caroline Starr Rose, is historical fiction at its best. Set in the late 1800’s in the Kansas grasslands, May is left at a prairie homestead as her family heads to another area to begin farming. She’s helping her family out to earn extra money by cooking and cleaning a sod house. But just as winter is approaching, she is suddenly abandoned by the couple who she was helping. Now how will she survive with no neighbors anywhere nearby? This beautifully written story is written in free verse minimizing the language to a flow of selective words that describe May’s life and dilemma. Be sure to read the Author’s Notes at the back. 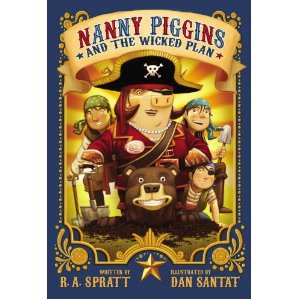 Nanny Piggins and the Wicked Plan, by R. A. Spratt, and sprinkled with delightful illustrations throughout by Dan Spratt, is a follow-up from the first book (“The Adventures of Nanny Piggins”), which I’ve not read. However, this hilarious story doesn’t need the first book to catch up on the calamities of this family as they deal with their father’s plan to fire dear, dear Nanny Piggins. By the way, this nanny is actually a pig which makes the storyline even funnier. This would be the perfect read-aloud for bedtime, except expect giggles!

One White Dolphin, by Gill Lewis, is a story of bravery, friendship, family and disabilities. Kara misses her mother who has been missing since she left to research in marine biology. Now both Kara and her father fear the worst. But her life is about to change when she meets an extraordinary boy who is very bright, a little sassy and has cerebral palsy. They both encounter a mother dolphin and her albino calf and attempt to save them, but they are also about to face some very challenging situations. Unfortunately, there are a few mild swear words in this book. 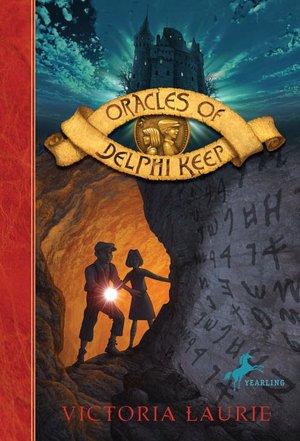 Oracles of Delphi Keep: Quest for the Secret Keeper, by Victoria Laurie, is an adventure waiting to be enjoyed! This is the third book in an exciting series but reading the other two are not necessary to enjoy this book. However, after reading this book, chances are you’ll want to read books 1 and 2. Three orphans are hiding in their safe haven, but the Royal Navy has just occupied their building to use as a hospital as well as all the tunnels running underground. The year is 1940 and England is about to be drawn into World War II. This story is more of a fantasy, than historical, as these orphans set out to decipher an important prophecy.

A Stone In My Hands, by Cathryn Clinton, is a very insightful story from a child’s viewpoint during a period of conflict in the Middle East. This historical fiction takes place during 1988 in Gaza City and eleven-year-old Malaak’s father has never returned to their Palestinian home after seeking work in Israel. The story is well written and showcases Malaak’s anxieties over the conflicts and then how she develops the resolve to overcome hatred. 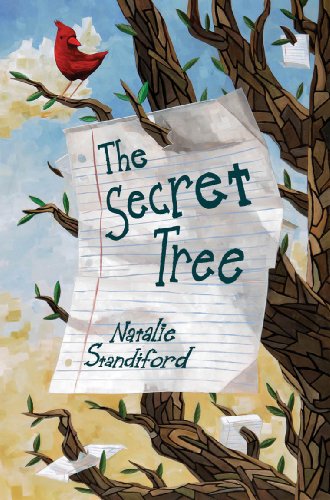 The Secret Tree, by Natalie Standiford, begins with Minty as she feels her whole neighborhood is full of mysteries. But one day she sees a flash deep in the woods and she goes to check it out. What she discovers is not just a tree, but a secret tree with a hollow trunk full of secrets written by neighbors. Now Minty and her friend are about to discover that people aren’t always as they seem and we should all look deeper into the true discoveries and abilities of others. This is an outstanding book! 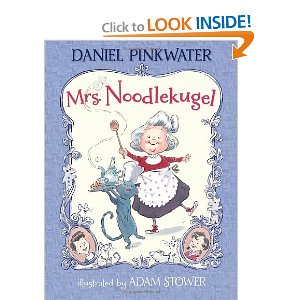 Mrs. NoodleKugel, by Daniel Pinkwater, and humorously illustrated by Adam Stower, is the perfect book for early readers becoming adept at handling chapters. This book has just the perfect recipe to encourage new readers to keep reading! The story is a bit nutty – but with enough ingredients to keep you guessing the outcome. Nick and Maxine live in the middle of a large city but discover a small house with a pretty little yard in the back of their apartment. Who lives there and what she does will entertain all who read the story!