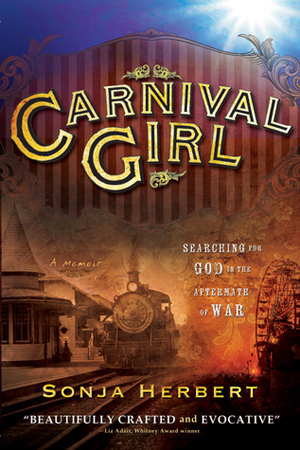 Carnival Girl by Sonja Herbert is a compelling story, part novel and part memoir. It takes place in Germany in the years following World War II and is a sad commentary on the aftermath of war and of the continuing legacy of bad parenting. It is also a testament to the power of forgiveness and ongoing love between a mother and daughter.

Sonja lives a nomadic life in post World War II Germany, a different village, a different school each week. Her father’s circus has been reduced to a traveling carnival. The family lives in a tiny caravan where the children sleep in the only bedroom and their parents share the divan in the main room. Food is scarce and the carnival sticks to primarily small villages and rural areas where food is more plentiful than in the cities. Often Sonja’s father accepts food as payment for tickets. The children and their parents work long, hard days. In spite of the work, they share a lot of good times. Their lives are also filled with a lot of hurt, insecurity, and emotional abuse due to their mother’s erratic temperament.

Sonja longs for a home, a real house. She would like to attend just one school and have a friend. At one point a strange man comes to visit her mother, Mutti, which upsets her father, Vati. Mutti runs away and the children are desolate until their father goes after her and brings her back, but nothing is ever quite the same again. Mutti and Vati are often at odds with each other and the children are always fearful that their mother will leave them again.

When Sonja is fourteen, during their winter encampment, she meets the LDS missionaries and is drawn to their message. She longs for baptism, but is ridiculed by her family and told she must wait until she is an adult to be baptized. Her faith is strong and she never stops trusting in her Heavenly Father’s love.

The story covers the growing up years of Sonja and is told in two time periods. A visit by Mutti to Sonja’s home in America years later brings back memories of those years when she was a child.

Vati (father) doesn’t say much, but is disappointed that his first three children are girls. He wants a son to carry on the carnival tradition and work beside him. Eventually another daughter and two sons are born to the family. His silence and way of life leave little signs of character growth. It’s apparent Mutti often hurts him, but he doesn’t share his feelings and seems more concerned that the carnival go on than about his wife or children’s wishes or needs. Yet he seems willing to forgive and overlook serious betrayals by his wife. His long awaited first son doesn’t really care for the carnival life, but is given no voice or cut any slack concerning the long hours of drudgery involved in the life his father thrusts upon him.

Mutti (mother) is the daughter of one German parent and one Jewish parent and has spent her growing up years hiding from Hitler’s attention.   Little background information concerning Vati is given other than his lifelong commitment to traveling circuses and carnivals. Mutti, however, is a complicated character, severely beaten and abused as a child, she eventually ran away to join the circus where she met Vati. She tolerates no physical abuse of her children due to her own frequent beatings as a child, yet she is emotionally abusive to them, calling them insulting names, mocking them, and allowing them to call each other rude names and belittle each other. She sees everything around her according to how it concerns her. She loves her children, but they are secondary to her own self-centered needs and desires, still the reader feels sympathy for her, understanding the horrors that made her the way she is.

The split time period of the telling of this story is a little awkward, but it’s a satisfying read and one I recommend to readers interested in family dynamics or history. The earlier time period is fascinating and well written. The current time period shows an interesting contrast. Even years later, long after the carnival is behind them, Mutti sees herself in a far more positive light than her daughter does, and she still sees herself as more victim than abuser. In spite of their past, mother and daughter maintain a deep love for each other.

Sonja Herbert was raised along with her five siblings in a traveling caravan following the carnival circuit after World War II. She is a convert to the Church. In America she continued her education, married, and now lives in Provo, Utah.