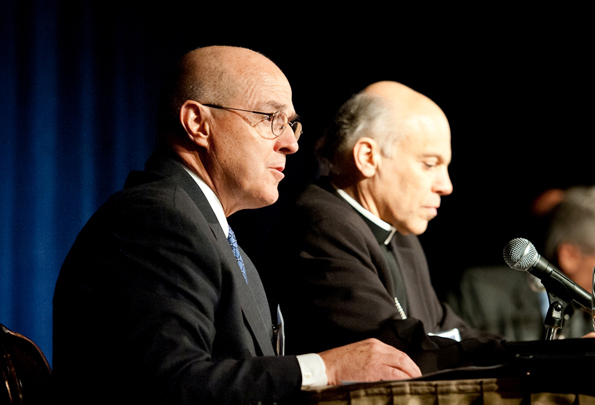 Last week in Washington DC, a history-making conference took place that brought Latter-day Saint, Catholic, mainline Protestant, Evangelical, Orthodox Christian and Jewish faith leaders together, who plan to unite to stand against the rising threats to religious freedom in America.

Elder L. Whitney Clayton, of the Presidency of the Quorum of the Seventy, represented the LDS Church, at the conference and called religious freedom “imperiled”. He said that the Church was willing to put in work and treasure to join others to stand against the incursions on religious freedom.

The church-goer, sitting in the pews, may not yet see the erosion of religious freedom, because he or she has not yet been personally affected. Yet, Elder Clayton noted,

“The Church of Jesus Christ of Latter-day Saints believes that the concern for protecting full, robust religious freedom is fully justified. Losses suffered at the federal, state and local levels are very real and threaten the religious freedom of the nation as a whole.

“These losses,” he said, “range from subtle manipulation of language to overtly coercive regulations and imposition of penalties for the exercise of conscience. Freedom of conscience is our most precious and personal right. Over time the loss of the right to follow our conscience will ultimately become a devastating personal loss to every American and to people across the world.

“We believe that we must wisely and appropriately resist the effort of the squeezing hand of government to control our consciences. Elder Clayton said, echoing a sentiment expressed by many faith leaders and scholars throughout the one-day conference sponsored by the American Religious Freedom project www.religiousfreedom.org of the Ethics and Public Policy Center www.eppc.org . 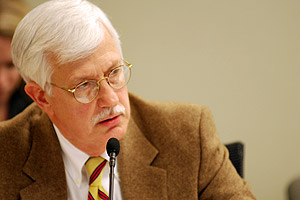 Dr. Thomas F. Farr, director of the Religious Freedom Project at Georgetown’s Berkley Center laid the groundwork for the conference. Religious freedom has long been fragile globally. In fact, “only in America is there a taproot of religious freedom that remains deeply embedded in law and culture.”

Even here, however, serious challenges have been mounting from a curious place.

From Stalin to Hitler to Saddam Hussein, it is tyrants who try to choke out religion to bloat their own power. However, according to Farr, “today religious liberty is being undermined not simply by tyrants, but by democratic majorities.” He said, “The root causes are not only a belief that religion is unnecessary for human flourishing, but that it actually poses a threat to these goods.”

He cited some recent examples.

“First, in his March 2009 speech at Notre Dame, President Obama proposed the following idea: It is beyond our capacity as human beings to know with certainty what God…asks of us.’…The President here denied that religion contains any element of rationality, any basis for knowing with certainty anything-for example that God exists, that each of us is equal in his eyes…

“In Secretary of State Hilary Clinton’s 2009 speech at Georgetown, she described the content of religious liberty and of another right she thought to be equally important in the following words: To fulfill their potential, people…must be free to worship, associate, and to love in the way that they choose.”

In August of 2010, when “Federal judge Vaughan Walker overturned a California referendum that had affirmed in law that marriage is a union between one man and one woman, Walker declared the results of this referendum unconstitutional, in part on the grounds that the reasons adduced in favor of marriage and against same-sex unions, were based on religious and moral values.'”

In other words, if a person’s political perspective was in any way influenced by his religion, that perspective is to be discounted as irrational. To take this idea further, some perspectives in the public square, like being against abortion, were automatically considered to be religious positions, and therefore, not a legitimate perspective at the round table of ideas.

“Listen carefully,” said Dr. Farr. “Powerful members of our political class are arguing that there is no rational content to religion; that religious freedom means the right to gather and worship, but not to bring religiously-informed moral judgments into political life; that religious freedom must be balanced by the “right” to love as one chooses; and that to make religious arguments against that purported right is unconstitutional.”

Dr. Farr said, “These propositions are not yet embedded in American law and culture, but they are well along the road. To the extent they succeed, they will represent a radical rejection of religious freedom as understood by the Founders and as practiced for most of our nation’s history.” 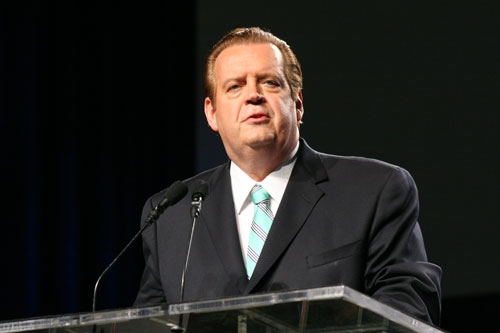 Dr. Richard Land of the Baptist’s Ethics and Religious Liberty Commission  said   “Typical of the secular mindset dominating the media …is the misguided declaration of New York Times columnist Nicolas Kristoff who wrote in a recent column (Feb. 22, 2012): The basic principle of American life is that we try to respect religious beliefs, and accommodate them when we can.’

“Accommodating them when we can” is a far cry from the First Amendment’s protection of religious freedom.

To see how accommodating religious freedom “when we can” plays out, several of the conference speakers referred to the government’s utter disregard for conscience in the federal Health and Human Services mandates recently issued as a part of Obamacare.

These mandates require that virtually all health care insurance plans provide free contraceptives, abortion-inducing drugs and sterilization services. This is a major problem for Catholic institutions that filed 19 law suits representing 43 entities last week. What it means for them is that the government tends to trample on their right of conscience, to demand that they and the institutions they sponsor, including hospitals, fund projects to which they have conscientious objections.

The government is telling people of religious faith that they must fund and sponsor insurance programs that violate their deepest moral convictions. While it may be a health insurance issue today, faith leaders understand that if government tramples this conscience right for Catholics, their own religious freedom rights will be endangered another day.

Dr. Richard Land, president of the Baptist’s Ethics and Religious Liberty Commission said, “This debate is about coercion, not Catholics; conscience, not contraception; and freedom, not fertility. This is about principle, not pelvic politics.’

The mandates are federal; they are sweeping, and their ramifications for religious freedom have not only been underplayed by the media, their seriousness has been obscured into mantras like “Republican’s war on women.”

“The main goal of the contraception mandate,” wrote Harvard Law School professor, Mary Ann Glendon, ” is not to protect women’s health. It is a move to conscript religious organizations into a political agenda.”

Archbishop William E. Lori, of Baltimore, who received a religious freedom award at the conference, said, “This is not about the Catholic Church wanting to force anybody to do anything; it is instead about the federal government forcing the church-consisting of its faithful and all but a few of its institutions-to act against church teaching.

It says that religious institutions can be free in private, behind closed doors, to worship, but that they are threatened in the public square for the exercise of their moral beliefs.

“At the deepest level,” said Glendon, “we are witnessing an attack on the institutions of civil society that are essential to limited government and are important buffers between the citizen and the all-powerful state.”

As Cardinal Timothy Dolan, president of the U.S. Conference of Catholic Bishops, put it, we are witnessing an effort to reduce religion to a private activity. “Never before,” he said, “have we faced this kind of challenge to our ability to engage in the public square as people of faith.”

“The bishops fear” said Glendon, that “religious liberty is becoming a second-class right.”

Dr. Land said, “The “free exercise of religion” goes well beyond the “freedom of worship” concept so often used today by those who fail to understand, or reject, the Constitution’s religious freedom protections. For them freedom of worship is restricted to church and home, to the space between your ears and the space between your shoulders. Free exercise of religion is far more robust and includes the rights to share one’s faith and to live out its implications in the social and economic spheres – in other words, the freedom to exercise or act and the right not to be coerced.” 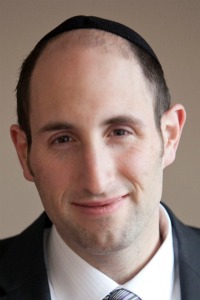 Rabbi Dr. Meir Soloveichik of Yeshiva University compared the freedom of religion assaults to the huppah, the canopy under which Jewish couples are wed. It is to be the embodiment of the kind of home that the Jewish bride and groom hope to build, a canopy with open sides, symbolizing their commitment to bear the monotheistic message to all the corners of the earth.

Dr. Soloveichik said, “Judiasm guides and obligates them wherever they go and whatever they do in their own home or in the public square…True religious freedom is to be loyal to your beliefs and customs even when they are unpopular with your neighbors and even when you are engaging with your neighbors. Our faith is an essential part of ourselves and cannot be amputated from our identity.”

He said that in the Europe of the Enlightenment, Jews were tantalized into society, but only if they were willing to sacrifice their Jewishness. The Huppah, the Abrahamic tent, is a symbol that one cannot be a fundamental person if part of you is left behind when you cross the threshold.

He said that religion informs our conduct. If people are denied the opportunity to define their religious identity beyond their own private worship, they are unilaterally redefining what it means to be religious.

At the conference, Elder Clayton said that obviously the LDS Church was committed to protecting religious freedom for ourselves and our own Church members.

“That said, we are just as concerned about the religious freedom rights of other faiths as we are about our own rights…Joseph Smith said in the early 1840’s, If it has been demonstrated that I have been willing to die for a Mormon, I am bold to declare before heaven that I am just as ready to die in defending the rights of a Presbyterian, a Baptist, or a good man of any other denomination for the same principle that would trample on the Latter-day Saints would trample upon the faith of the Roman Catholics or any other denomination who may be unpopular or too weak to defend themselves.”

What lies ahead? Elder Clayton said, “We’ll redouble our efforts to educate our own Church members concerning protecting religious freedom.   We will support a united effort to educate legislators, opinion leaders, and citizens generally across the country about religious freedom and the fact that it is imperiled today in this country, We’ll seek to secure their help, along with others, in the battle to protect religious freedom.”

Protecting religious freedom “will require a broadly-based, unified effort. No single church can or should bear the burden alone. If there were ever a time when we need a chorus, not a solo, this is it.”