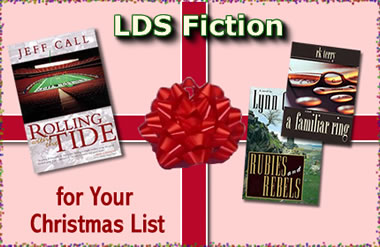 Christmas shopping is on the minds of most of us and high on most shopping lists are books.  What would a Christmas shopping list be without a few of the latest LDS novels?  More LDS novels are sold in the weeks leading up to Christmas than any other time of the year and I thought it might be helpful to take a look at some of the choices being offered this year.  All of the books I’ve reviewed this past year would make wonderful gifts, but here are a few brief notes about some other recent releases which are well worth spending your Christmas shopping dollars to give to loved ones.

If there’s a sports fan or teenage boy on the shopping list, consider Jeff Call’s Rolling with the Tide which begins with missionary companions assigned to a seemingly impossible area.  Through hard work and a severe trial of their faith they accomplish the seemingly impossible, then return home to begin college.  Gunnar Hanshaw with a lot of pushing and encouragement from Preston Brady works his way up from a walk-on quarterback at Snow College to the star quarterback of the University of Alabama football team.  Their missions and their continued commitment to the Gospel along with the missionary spirit firmly entrenched in their hearts are major factors both in their college careers and the lives that follow.  This novel shows a great deal of improvement over Call’s first book , Mormonville.  It is both better written and the premise is far more believable.  There are fewer typos and editorial errors as well, though some of those found in this new book are quite humorous.  On page 193 I found “He certainly wasn’t the first college football to play at the age of 25.”  Call’s expertise in the sport of football is apparent and he blends testimony and sports into a powerful, faith-promoting story.
Rolling with the Tide by Jeff Call, Bonneville Books, 243 pages, $15.95.

Also for teenagers, both girls and boys on your list, take a look at The Long Road Home by Cheri Crane.  This thought-provoking novel deals with the importance of each individual gaining a personal testimony.  A testimony based on a good family, habit, and the expectations of others isn’t enough is the strong premise Crane presents in this novel.  Reese Clark discovers that not even being raised in a faithful LDS home, being popular as both a classmate and an athlete in high school, and persuading his girlfriend to take the missionary lessons are enough without a personal testimony of his own.  When tragedy strikes, his faith is not strong enough to carry him and he falls away from the Church.  Finding his way back is a road fraught with hardship and pain.  Not everyone who grows up with a superficial testimony, then falls away from the Church falls as far as Reese does and his failure feels a bit extreme, but the important element of the story that testimonies are earned through hard work and effort and not by simply drifting through pleasant circumstances carries through making this novel a spiritually rewarding experience as well as just plain enjoyable reading.
The Long Road Home by Cheri Crane, Covenant Communications, 269 pages, $14.95.

Lynn Gardner is back!  Rubies and Rebels is a roller coaster ride fans of fast paced action drama are bound to love.  Allison and Bart Allen are expecting an addition to their family and plans are for Allison to stay home while she prepares for the event, but as agents for Anastasia, an undercover anti-terror organization, they wind up in Armenia by different routes.  Gardner’s impressive knowledge of the twists and turns taking place in world events today as well-known terrorists plot and destroy to gain power lends credence to the story.  Her previous books have been exciting and have garnered her many fans, but this book is bound to increase her following as readers discover a deeper, more spiritual message along with the most compellingly realistic adventure she has written to date.
Rubies and Rebels by Lynn Gardner, Covenant Communications, 356 pages, $14.95.

Where I Belong by Rachel Nunes is Nunes at her finest.  This is a story that will warm the heart of any mother on your shopping list and thrill all those romance fans, though I hesitate to refer to Where I Belong as a romance because it is so much more.  It isn’t just the story of best friends who fall in love, but delves into the choices a woman blessed with great talent must make between her art and the fulfillment of her womanhood.  Heather Samis is a gifted artist who believes with all her heart that her gift is from God and that she must magnify the talent she has been given.  She also has seen the sacrifices her mother has made to bear and rear children and believes she can not make sacrifices so large as those her mother has made.  Nunes doesn’t placate her audience with easy answers, but through the medium of art and loving relationships with other women she allows Heather to not only see a bigger picture, but to paint a multi-faceted canvas of her own.  A subtle exploration of faith and the meaning of sacrifice add to this book’s depth.
Where I Belong by Rachel Nunes, Bonneville Books, 206 pages, $14.95

a familiar ring by rk terry strikes a familiar chord just as the author intends.  Jerry Carlson is a man whose life has gone very wrong.  His girlfriend left him, he lost his job, then his apartment, and now he’s homeless, living on the streets.  He’s too discouraged to do anything about his life until Max leaves him a cell phone and some instructions.  Suddenly his life is moving upward and Jerry grasps happiness and love with both hands because he knows it’s all temporary.  Some day he has to give it all back.  The story is Christmasy sentimental and predictable, the reader easily guesses what is going to happen next, but can’t put the book down anyway.

If you have someone on your list who loves to give–or even a Scrooge, this book will give that person reason to pause as well as delight him or her. a familiar ring by rk terry, Covenant Communications, 202 pages, $14.95.

Above Suspicion by Betsy Brannon Green will thrill readers who love mystery served up with a bit of romance and a twist of humor.  The Haggerty crowd show up at a Bed and Breakfast Inn run by Mary Grace O’Malley who is reeling from the sudden arrival of a man she was once strongly attracted to, but who disappeared from her life when their lives took sudden opposite turns.  He is now a news journalist pursuing a twenty-five year old murder.  He finds not only a woman he thought was lost to him, but discovers more mystery than he had bargained for.  As always Green delivers a spell-binding mystery with numerous twists and turns, a gentle love story, and a lot of Southern humor in the shape of her gang of well-meaning old ladies.
Above Suspicion by Betsy Brannon Green, 266 pages, $14.95

Over the past ten years LDS historical fictional series have dominated the Christmas book market.  What a gift of love it has been to give those dear to us the latest volume in a Gerald Lund, David Woolley, Ron Carter or Dean Hughes’ series.  For anyone who started giving these series as gifts please finish the series for those special people on your list.  Lund, for obvious reasons, doesn’t have a new novel this year, Woolley’s Volume Three of the Promised Land series, Place of Refuge, is scheduled for release December 8.  This third volume tells of the clash between faithful Jews who retain their hope for the coming messiah and the corrupt Jewish society surrounding them in the sixth century before Christ.  It narrows the story’s focus to those, particularly Lehi’s family, who flee to the desert seeking a place of refuge as foretold by Isaiah. Rich in history and a veritable feast of holy land detail, this volume is also a hard-to-put-down cliff-hanger adventure.
Place of Refuge by David Woolley, 489 pages, $23.95

Carter’s up to Volume Seven in the Prelude to Glory series with the Impending Storm (make certain you haven’t missed a volume), and Hughes has recently released his third installment of the Hearts of the Children, with How Many Roads? (Hans is still my favorite character in this series).  Carter’s book feeds a hunger many of us have to understand the lives and events that led up to the restoration of the gospel through the establishment of a unique government on the North American continent.

This book recounts a time when the war is considered over, the Americans have won, but one of the greatest battles for democracy is still waging as thirteen separate governments begin the steps to become one united nation.  Hughes has made the Thomas family a dearly loved part of Fictional LDS lore.  This family, along with Lund’s Steed family, have become so much a part of the fabric of our collected family history it is sometimes hard to remember these people aren’t real, though the experiences they lived through were all too real.
Impending Storm Vol 7, Ron Carter,  Bookcraft, 560 pages, $25.95
How Many Roads?, Dean Hughs,  Bookcraft, 467 pages, $22.95.

Two of the strongest series volumes this year are Land Divided, Vol 2 in Robert Marcum’s House of Israel series and Through the Perilous Fight, Vol 3 in the Faith of Our Fathers series by N. C. Allen.  Marcum’s book goes a long way toward giving the reader an understanding of the terrorism and conflict raging today in the Middle East. With Marcum we see the peoples of cultures that existed side by side in a land neither one owned or controlled for thousands of years turned into bitter enemies by the holocaust and the political and economic greed of neighbors and supposed allies.  We are reminded that even in the days when Jesus walked that land, it was owned by neither the Arabs or the Jews.  The return of the Jews to Israel following the holocaust in Europe would appear to be the fulfilment of ancient prophecy, but with Marcum the reader learns that more than a physical return to a revered piece of ground is involved in the fulfilment of the prophecy. The real return will occur only when the hearts of the Jews return to their God.  Allen’s book is equally compelling in granting an understanding of the ideology that nearly severed the United States as a nation and the after effects that still divide us in many ways, particularly in how we view and define equality and race.  One other way these two books are alike is in their cliff hanger endings.  One thing is for sure if these books are given as gifts there will be that many more of us biting our nails and waiting anxiously for the next books in the series.
Land Divided Vol 2, Robert Marcum, Covenant Communications, 456 pages, $22.95
Through the Perilous Fight, N.C. Allen, Covenant Communications, 423 pages $$22.95