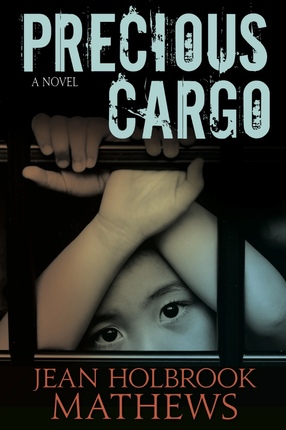 Jean Holbrook Mathews’ fourth book Precious Cargo continues the story of Julia Wentworth, a widow employed by a charitable foundation in America that serves underprivileged people in the Philippines which began with The Assignment. Though this new book features the same primary character and location, it can easily stand on its own. The Assignment dealt with a terrorist group while Precious Cargo concerns child trafficking. Holbrook is quickly making a name for herself as a mystery/suspense writer to watch for as she tackles difficult topics in far flung locations. Her topics are as current as today’s news.

Julia is sent back to the Philippines to unravel a problem that arises when two borrowers who received start-up money for their businesses from the charity she represents suddenly refuse to make their payments on their small loans. When she learns the borrowers’ two young daughters disappeared just before the couple refused to make their payment and numerous other children have recently disappeared to child traffickers, she contacts a police detective who assisted her on her previous case. Their investigation takes them from the mountainous interior of the island to the deep harbors, from luxury mansions to cardboard box slums. She learns the smugglers are not only trafficking in helpless children, but in drugs and stolen cars as well. Danger lurks not only from criminals, but from the weather as a major typhoon targets the island.

Mathews creates believable characters who deal with multiple problems both of the criminal bent and the personal. Julia, a recent widow, has had little time to grieve the tragic loss of her husband and her children moving to distant cities when she is thrust into a situation where children’s lives are at stake and she questions her growing attachment to a man of a different culture.

The action keeps coming as Mathew’s plot develops in several directions culminating in ascending climaxes woven together. The children’s predicament touches an emotional chord in the reader causing an ache for the innocent naive trust of children and for parents whose poverty creates a climate where even young children must contribute small earnings in order for the family to survive. The simple things these poor children do to gain a coin or two places them in contact with strangers who too often exploit them.

Jean Holbrook Mathews served as the administrative director of an international foundation headquartered in St. Louis with chapters in five countries, including the Philippines. She has traveled extensively and served a two year mission with her husband in the Philippines.