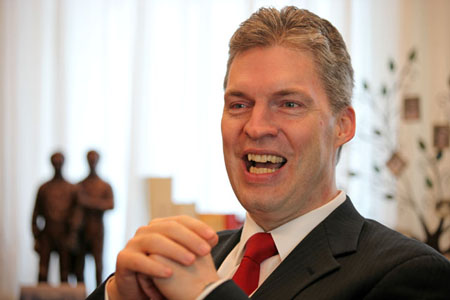 Jeremiah Morgan was the assistant to the chair of the Kansas City Missouri Temple open house and dedication.

As he grew up, the stake president in Liberty, Missouri, believed that his name was Jeremiah Joseph Smith Morgan. As it turns out, the “Smith” wasn’t actually a part of his name, but that is an indicator of how deeply he felt tied to the prophet.

So committed was President Morgan’s mother, in fact, that when he was 11, she moved the family from Lamoni to Independence, Missouri to gather with other church members.

When he was in high school, his mother read the Book of Mormon aloud to him as he got ready in the morning, hearing the verses as he brushed his teeth or put on his shoes or gobbled down breakfast. “She put everything that she could into me,” he said, “as she wanted to have a child who was highly committed to the Lord, and she thought that would be me.”

“I can’t say that I learned a whole lot from the scriptures,” President Morgan confessed. “I do remember a lot of and it came to pass’s’ and wars and rumors of wars’. What I did gain, however, was the strongest sense about how important it was to my mother to feel the Spirit and be taught the gospel.” 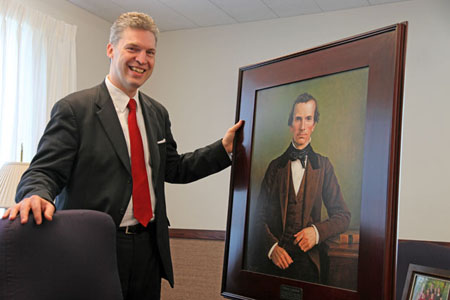 His mother certainly came by this devotion through her family line. Her great, great grandfather Francis Case had been baptized by Oliver Cowdery in 1831 in Lexington, Missouri. He, and his wife, Mary Ann, lived in Jackson County where they were treated cruelly and driven out.

They next had a farm near Gallatin, not far from Adam-ondi-ahman. Here again they received savage treatment for their beliefs, and he had been one who helped bury the Mormon dead at Haun’s Mill after the mob rode in, attacked the settlers as they worked and left limp bodies behind. So devoted were they to the restored gospel that this didn’t stop them and they migrated on to Nauvoo where they had the lot on a corner just across from Joseph and Emma’s Mansion House.

Jeremiah’s grandfather, Francis Case was one of a group of men who, at Emma Smith’s request, secreted Joseph Smith’s body out of the coffin after the funeral and by dark of night buried him under the spring house at the Nauvoo House to prevent members of the mob from stealing and desecrating the Prophet’s body.

So far, in many ways, this could be the story of many LDS boys who had a committed mother, but President Morgan’s story is different in one critical way. He grew up a member of the Reorganized Church of Jesus Christ of Latter Day Saints.

Francis and Mary Ann Case didn’t go West with Brigham Young for reasons not clearly known. President Morgan said, “I don’t know how they could have gone from accepting a traveling missionary in a remote area and the new gospel he approached to being driven from their homes again and again and then not gone all the way. I don’t know what they experienced.”

Whatever it was, President Morgan’s experience would be vastly different. When he was about 14, his mother wanted to take a church history trip and he didn’t want to go. He wanted to get a job and earn some money. “My father had abandoned us when I was a year old, and, with a single mother, my family was often the poor family, the kind that others would bring Christmas boxes to. It sounded very appealing to make some money, and I went on this trip kicking and screaming along the way.”

However, all that would change. In the Sacred Grove, he had a remarkable, spiritual experience which was imprinted on his deepest soul, but which he does not detail. “There’s no way to duplicate the Sacred Grove,” he said. “That was a great moment for me.” 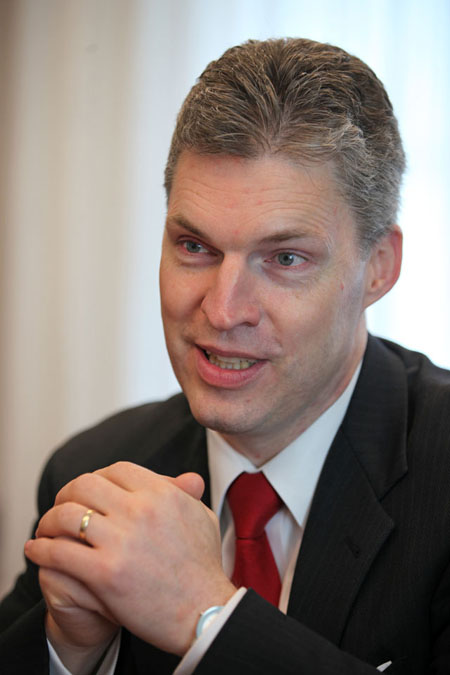 It was after this that he began to be aware of a tumult in the RLDS church. Things were changing. In many ways, the teenaged Jeremiah saw it as a retreat from Joseph Smith’s First Vision. He heard people backing away from talking about Joseph’s experience as any more than a “significant religious experience.” He felt that the church was backing off, as well, from calling the Book of Mormon revealed scripture. This was troubling to him. He saw the church of his youth as losing its original identity and understanding of the gospel.

Being an earnest young man, he decided that he wanted to know for himself if his church was true. Growing up, he didn’t have fond feelings about Brigham Young, “and that” he said, “worked to my advantage, because when I actually learned about Brigham Young, it was very different than what I had learned.”

In high school, without telling anybody, he spent two months going to both the RLDS and LDS Churches every Sunday. He felt that the truth had to be with a restoration church. (The number of churches that claim that their origins begin with Joseph Smith are between 100 and 400, depending on the source.)

“In the morning I would go to my RLDS church and then in the afternoon go to the LDS church and sit in the overflow. I knew right away there was a big difference. It didn’t take me long to figure that out.”

He said that he had also dated an LDS girl a few times in high school, and he didn’t tell her, either, of his interest in the church. “I didn’t want anybody to make up my mind for me or try to influence me.”

“I told my mother first that I was going to join the LDS Church, and she didn’t say a word to me. She went right to the phone to let all the relatives know so they could begin working on me,” said President Morgan. They had him read lots of anti-Mormon literature, and his mother wouldn’t let him be baptized until he turned 18. Still, he said, “I am the kind of person that when I know, I don’t turn back.” And, he said, he knew.

His mother was “very upset” when he joined the Church, and she was upset, again, a year later when he put in his application to go on a mission. He served in the Micronesia Guam mission, where he faithfully wrote his mother every week. Since his mother was very proud of him in many ways, she shared his letters and pictures with her friends at her RLDS church. Impressed with his experiences shared by his mother, some of her friends said, “We wouldn’t mind if our sons joined the LDS Church, if they did the same thing.”

“This helped smooth things out for her a bit,” he said, “but she didn’t ever join the LDS Church. I probably pushed too hard,” he admitted.

The changes in the RLDS church happened slowly, so like the frog in the water who stayed while it was being gradually heated to boiling, she had her perspective, too change with time.

They were beginning to abandon the Book of Mormon while she was alive, but she didn’t see it.

“I think of the RLDS apostasy,” he said. “They had the truth and many of their early leaders would have been priesthood holders. Look what happens in 160 to 170 years. Look what happens to a church without a living prophet. They diverge from the gospel by degrees. If you are along the path with them, you don’t see it as you go. It is not evident to you. I asked my mother to describe God and she gave me a Nicene creed sort of description. I saw the transition even in her.

“I love my restoration heritage,” he said, “and I love the restoration branches. There are some really great people there trying to do some great things. But when you have been given the whole truth as I finally was, where do you go from there? You don’t go anywhere from there. This is Jesus Christ’s church, there’s no doubt about it. I was grateful that I was in a position that something could open my mind and heart that there was something else than what I had been raised to.

President Morgan saw his role as assistant to the Chair of the Kansas City Missouri Temple open house and dedication as one of the sweet experiences of his life. “I am thankful every day that I could be in this position at this time in this place,” he said.

I went through the RLDS visitor's center back in 1998. They were showing a film about Joseph Smith that was similar to the First Vision film the LDS Church made in the 70's. But when Joseph goes to the grove to pray the narrator says that Joseph "sensed" that the true church was not on the earth. There was no mention of Joseph having a vision of God the Father and his Son, Jesus Christ. Very sad.

I grew up in a blue collar town in northeast Wyoming. After graduating from high school I went into the Air Force. After completing my duties I went to college where I graduated with a B.S. in Computer Science. So I know what President Morgan went through to get where he is today. I am thankful that he followed the teachings of the living prophets. How could things not be right with him?