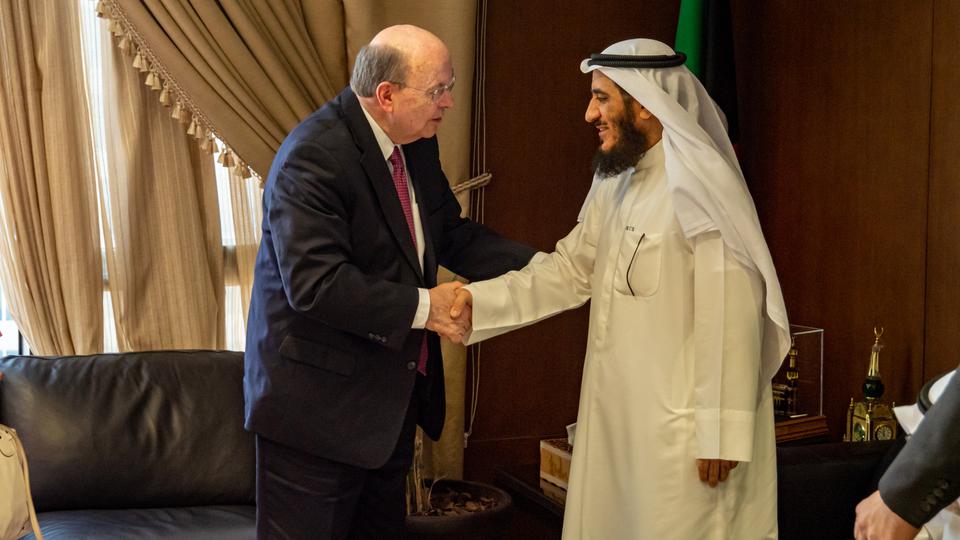 Apostle Thanks State of Kuwait for Formally Recognizing the Church

In February — and for the first time in more than 40 years — the State of Kuwait gave official recognition to a religious organization. That organization is The Church of Jesus Christ of Latter-day Saints.

This week Elder Quentin L. Cook of the Quorum of the Twelve Apostles and his wife, Mary, met government leaders and Latter-day Saints in Kuwait City to express gratitude on behalf of the First Presidency for the important milestone.

“We are incredibly grateful for your absolutely key role in granting recognition to The Church of Jesus Christ of Latter-day Saints,” Elder Cook said Monday during a meeting with Mr. Fareed Emadi, secretary general of the Supreme Commission for the Promotion of Moderation in the Ministry of Awqaf. “This is a great occasion for us and we’re just very pleased. We appreciate the friendship and we want to respond. We are going to be very good citizens, good neighbors, good friends. … We feel comfortable being with people of different faiths but who have accountability to God.”

Elder Cook gave Mr. Fareed a leather-bound Book of Mormon and a small pewter pioneer handcart statue. Bishop Terry Harradine, leader of the Church’s Kuwait congregation, gave the government leader a hardbound copy of volume one of “Saints,” signed by each member of the congregation.

The Ministry of Aqwaf gave the Church this recognition, Mr. Fareed said, based on the teachings of Islam and the Prophet Muhammad that focus on the desire to live in peace. “Our religion taught us how to deal with others and how to respect others,” he said.

The formal recognition of the Church strictly prohibits the proselytizing to and baptism of Muslims in Kuwait.

At a devotional on Sunday, June 9, with members of the Kuwait congregation, Elder Cook talked about the practical and “extremely significant” benefits of a government recognizing a church. These include, he said, the ability to open a bank account as a church, to rent or own property and to seek visas for humanitarian volunteers.

“It may seem simple in some ways [but] this is no small thing,” said Elder Cook, whose stop in Kuwait followed visits last week to Jerusalem and Greece. “There’s a huge difference when you are received well and when you’re not received well. It’s important to be able to have the attributes of an entity that is recognized by the laws of government where we worship and where we live.”

While in Kuwait, Elder and Sister Cook also met with a senior member of the Kuwaiti royal family, Her Excellency Sheikha Intisar Salem al-Ali al-Sabah. On Monday, Elder Cook and other men, including local interfaith leaders, gathered for a traditional diwaniya meeting (an important feature of a Gulf Arab man’s social life). Sister Cook and other women also gathered for fellowship.

Elder Cook spoke Sunday to 125 soldiers at a sacrament meeting at Camp Arifjan, a U.S. military base outside Kuwait City.

“Being out here, we often feel separated from a lot of what binds us and connects us to the gospel — or you can feel that way,” said Latter-day Saint and U.S. Army Chaplain Joshua Sharp. “There are a lot of temptations and opportunities that you wouldn’t have back home. And then missed opportunities. You can’t go to the temple as freely as many are able to. Even though we attend church on Sunday, it’s in a completely different setting. So, being able to be with, so closely and so intimately, with an Apostle of the Lord was very powerful and a great lift to the soldiers.”

Elder Jeffrey R. Holland of the Quorum of the Twelve Apostles dedicated Kuwait for the blessings of the gospel of the restored Church of Jesus Christ in 2011.