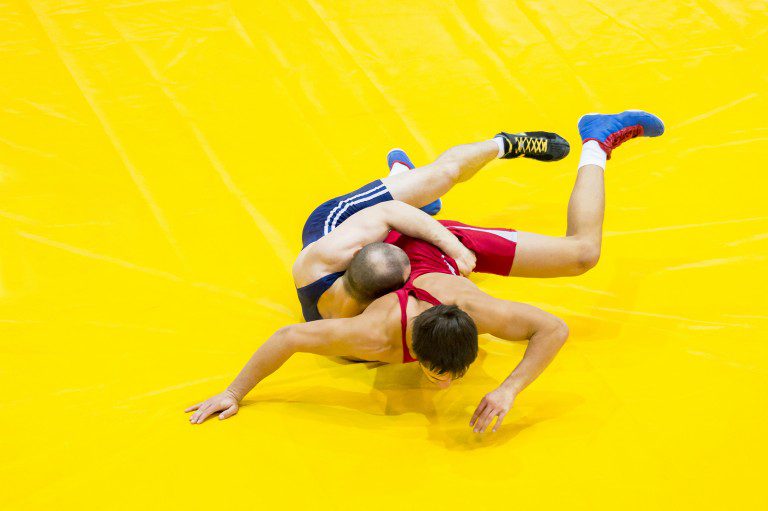 One of my scouts asked me about my most embarrassing moment. I could think of many, but because I had just been to a wrestling match, I thought of one that had to do with that sport.

The year before the particular embarrassing event, I had ended up having to run for my life from a pack of coyotes while trying to save a newborn calf and its mother. It was winter, with temperatures at about thirty degrees below zero. The cold and stress on my lungs helped bring on pneumonia to such an extent that I was in fairly critical condition for about two weeks.

After that, any time I stressed my lungs a lot, I would have trouble breathing. I struggled mildly through track that spring and football in the fall. But when it came to wrestling, I was really having trouble. Finally, my parents and my coach insisted that I see a doctor.

After many tests, the doctor told me I had some severe lung damage. He said the main problem was that the lung tissues were damaged to the point that they were having a hard time staying moist like they needed. Whether the damage was caused by the overexertion while exposed to the freezing cold air or from the pneumonia, he wasn’t sure. But he said the key was to be able to moisten them up before a physically demanding event.

He prescribed the use of an inhaler. He taught me how to put the nozzle in my mouth and pump a few shots of it while breathing the moisture into my lungs. The doctor told me it would not be against any kind of athletic rules because it had no steroids in it. He also told me to use it just before wrestling practice each day and before each match.

At the next practice, I explained to my coach what the doctor had said. My coach was concerned enough that every afternoon before practice, he would ask me if I had used the inhaler. But at the first match, neither he nor I thought about what taking some breaths from the inhaler might look like. Just before I stepped onto the mat, I took a couple of deep breaths from it as prescribed. The other coach saw what I did and immediately told the ref that I was taking drugs. The ref said he was going to disqualify me from the match.

My coach then told the ref that what I took was doctor prescribed, and if the ref disqualified me for it, he could lose his job. “You know very well that the rules allow an athlete to take doctor-prescribed medicine.”

For about fifteen minutes, the whole gym was in an uproar with the opposing team wanting me disqualified and acting like they would lynch me. Fortunately, it was a home meet, and they and their fans were far outnumbered by ours. Finally, the ref decided that the best thing to do was to call the doctor who prescribed the medicine. It took about ten more minutes to get hold of him, and when the doctor explained that the medicine was nothing more than something to put moisture into my lungs, the ref told the opposing team what he had learned.

The opposing coach still demanded I be disqualified. So the ref showed him the rules about doctor-prescribed medication and told him if he made one more remark about it, he would be removed from the gym.

By the time the match finally resumed, I was so embarrassed I just wanted to get it over with and be out of there. I pinned my opponent in under a minute, and that didn’t help the other team feel any less that I had strength enhancing drugs. But I had done the same thing every previous time we had met and had never had the medicine before.

When the wrestling meet was over, and we had won handily, the other team stormed away, still saying we cheated, even though we would have won even if they had won my match.

Our team met in the locker room afterward and Coach sighed. “I’m glad that’s over. But next time, Howard, bring your inhaler to the weigh-in to show the ref and the opposing team.”

“I don’t know, Coach,” Lenny said. “The way Howard pinned that kid, maybe the rest of us should get inhalers.”

Coach was in no mood to be teased and growled back his answer. “We’ll just get all of you a spray bottle full of water, and you can just suck on that.”

I guess "to each his own" because I don't think this particular story should have warranted any embarrassment at all. From my perspective, an embarrassing event is one that warrants embarrassment each time it is re-told--of which I have many.