African Refugee Saints: Why They Stay Faithful When They Don’t Have Church | Meridian Magazine 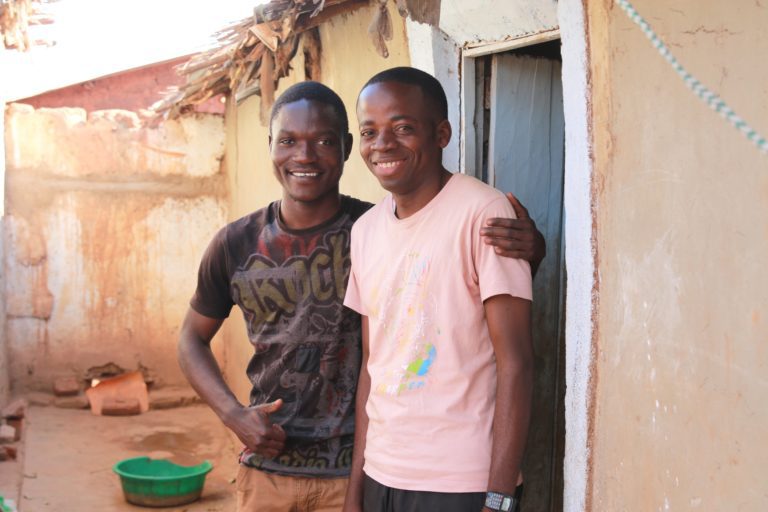 African Refugee Saints: Why They Stay Faithful When They Don’t Have Church

Some names have been changed to maintain the individuals’ safety.

Gloire could hear his Latter-day Saint neighbors through the thin walls of his house talking about the temple. He found himself lingering longer and longer at their adjoining wall to listen to what they had to say. Something was pricked inside his heart—despite his high up calling in another church near his home in the Democratic Republic of the Congo—and soon, to the dismay of his wife Wailunga, he asked his neighbors if he could join in on their discussions to learn more about their faith.

With great worry for the salvation of her husband, Wailunga went to her church leaders for counsel and prayers on behalf of her straying husband. They promised that in three days Gloire would come around, but in three days, his conviction to learn about The Church of Jesus Christ of Latter-day Saints was only greater. Against Wailunga’s desires, Gloire invited the missionaries to teach them in their home, and while Wailunga was offering secret prayers for Gloire to turn away from this strange doctrine, she was also being invited to pray to know if the Book of Mormon was true.

Early one Sunday morning in 2014, she dreamed of her dad who had passed away. He told her that she needed to join the Church. She awoke from that dream knowing that her prayer of deliverance for her husband had been answered—that their deliverance would be found in this new church they were going to join.

Five years later, this amazing couple still cling to the gospel. As I talked to them, they held their worn scriptures and hymn book and wore CTR rings as wedding bands. But they no longer live in the home where they discovered the gospel in the Democratic Republic of the Congo. They, like so many other Congolese, are refugees living in a small mud home in the densely populated Dzaleka Refugee Camp of Malawi.

Each refugee has a different story of how and why they came to the camp. Because of privacy issues and the danger it can pose to refugees to share their stories in a public setting, I will not disclose the details of their stories, but many have been separated from family, seen family members tortured and killed in front of them, have had armed men break into their homes, and have fled from their countries under extremely dire circumstances.

With 40,000 other refugees tucked away an hour from the capitol of Malawi in the mountainous bush, Gloire and Wailunga are far from job opportunities and any branches of the Church. When once he was a member of the bishopric and she was the Young Women President, now they cannot attend church. Miraculously, a group of 20-30 members of the Church found each other in the crowded camp and now meet together every Monday for Family Home Evening to share the gospel and fellowship each other.

Going to each of their homes in the refugee camp moved me so deeply, not only as my husband and I shared our testimonies with them, but as I asked them about their conversion stories and their convictions in the gospel. My ultimate question for each person was, “Why do you stay faithful in the gospel even though you are so far away from church?” With so little material or contact with church members, their continuous zeal to maintain their testimonies and active membership inspired me and their answers to my question were astounding:

Gloire wrestled with his youngest child as he said maintaining their gospel habits of studying their scriptures and doing FHE helps remind them that they are children of God, they are members of His true Church, and because they are following the path God wants them to follow, they will be protected no matter where they are. Wailunga sat across from Gloire in the bare room, furnished only by a few wooden benches, and echoed what her husband said, adding that even though the Church is far, when they pray, they know that everything is ok.

Kibungu, a recently returned missionary who served in his home country of the Democratic Republic of the Congo, came to the camp alone, never expecting to be in a place where he could not partake of the sacrament. Though he came without any other family members, he quickly found the group of members and has found a family in their fellowship. Each time we visited the members houses in the camp, he was at a different house, ministering to them. The camp is difficult in so many ways, but he said he can’t change his beliefs or conviction because of his circumstances. “It is part of life—it is part of the plan of God. We are here [on earth] because we have to gain experience. Sometimes we come across problems and we have to figure it out, and that is how we grow.”

Ngeleka came to the camp with his brother and sister and together they live in a small walled compound with a chicken that roams around their small dirt yard. They especially love to sing hymns, and we sang many in their home, Ngeleka belting out in French as we sang in English. His answer to my question was simple and profound. “We know the church is true. We believe in God and we know the truth that is in our Church. It’s the true Church. That’s all.” If you have found the truth, how can you turn from it?

Jessica is the oldest of four children who live with their widowed mother, Esther. Their whole family is tall and gentle, towering over most people they pass in the camp. While others in the camp speak Swahili and French, Esther’s children only know perfect English. They expressed how different the education is in Malawi and how they miss school and church in South Africa, where they last lived. Despite this, Jessica said, “The scriptures teach us that even when you aren’t at church you can feel the spirit. When we sing hymns and pray, it gives us hope.”

Pichou, who has eight children and is starting up a salon in the camp, feels strongly that a church without the true doctrine is not the true Church. Though there are many other churches they could attend within the camp, they choose to meet together in their home to read scriptures because they know they have the truth. Pichou often holds FHE at his home with the other refugee Saints, setting each chair in perfect position to prepare for families to arrive on Monday nights and pack into their dimly lit family room. He also said, “Heavenly Father chose this life for us at this particular moment as a test to make us stronger. My prayers have become longer because of my challenges.”

Mapendo, a single mother of three children, shares her testimony every chance she gets. After getting a Joseph Smith pamphlet one day on the street in 2016, she felt strongly that she needed to find and attend the Church. After a few months, she went to church for the first time during a fast and testimony meeting, and though she was brand new, she felt prompted to go up and share her testimony that she knew that the Joseph Smith pamphlet was true. Now, she fasts and studies the scriptures with incredible dedication, even as a new refugee and a relatively new member of the Church living on the outskirts of the camp with her children. Why does she stay faithful even though she can’t attend church?

“When you take a look over the first gospel principles in the church, faith is the first one. Faith is the very first gospel principle because through faith, the faith that we have in the Lord, it will lead you to repent, get baptized, receive the gift of the Holy Ghost and live according to the teachings of the Lord Jesus Christ,” Mapendo said. “With faith, though we are living far from the church, we can endure all things. We can be able to be patient with the weaknesses of others, we can be patient in our difficulties, as we wait for our blessings. That is with faith. Without faith we can’t do anything.”

We sat on mats donated by the UNHCR (United Nations High Commissioner for Refugees) on the floor of Mapendo’s home, feeling overwhelmed with the Spirit as she pulled out the Joseph Smith pamphlet that brought her to the Church. “I should really frame this,” she remarked as she lovingly caressed it in her hands.

In each home, before we left, we asked if each family wanted to choose a hymn to sing in closing. The majority chose “How Firm of Foundation”, and as the words of their testimonies still hung in the air and tears filled our eyes, we heard these refugee Saints sing “who unto the Savior for refugee have fled,” and, “In ev’ry condition—in sickness, in health, in poverty’s vale or abounding in wealth, at home or abroad, on the land or the sea—as thy days may demand, so thy succor shall be.”

The Saint’s homes in Dzaleka Refugee Camp may be made of mud, but their homes are like temples in the midst of a world of chaos because of the tremendous trust they have in Jesus Christ. Though they may seem like the “least of these”, the testimonies they have of the truth and the valiance with which they practice it stand as a beacon for all—that even through unbearable storms, it is only through Christ that hope is found.

Wonderful and touching article. There are congregations of the Church in Malawi— hope they can reach out and minister to their refugee brothers and sisters if that’s even possible.

After serving in Africa for two years, this article really touched our hearts. The African Saints are so faithful and humble, but happily follow the Spirit even in very difficult circumstances. We love them.