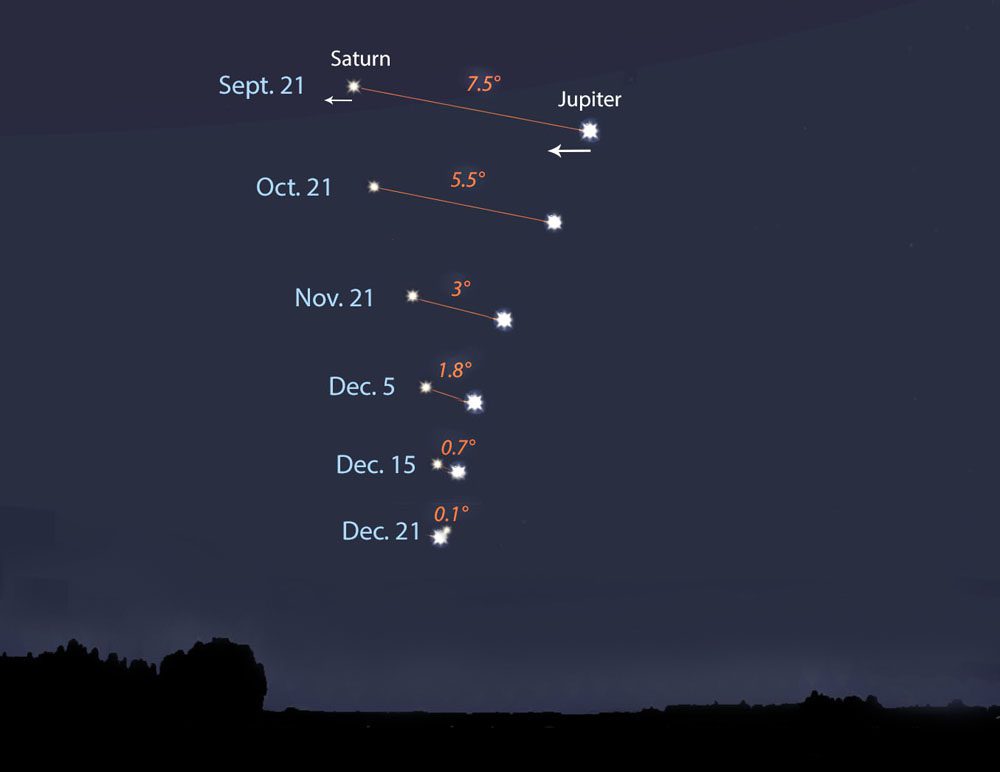 Cloudy the day before and cloudy or partly cloudy again the day after, a beautiful clear day came on December 21, 2020 as my good friend Roger Browne and I tried to get some good views of the Jupiter and Saturn conjunction.

We went to the small Cedar Valley Airport nestled behind the Eagle Mountain foothills, just 10 minutes from my home. This glider and skydiving airport is 6.5 miles from the WalMart Supercenter on highway 73 going west and is a few blocks from the highway going to Cedar Fort.

This airport is a great place to enjoy the wonders of the heavens and provided a great view of the two Titans of our solar system, Jupiter and Saturn, as if jostling back and forth in a wrestling match. This location is easy to get to from the densely populated Salt Lake and Utah County areas, and is behind the foothills of Eagle Mountain and with very little light pollution coming in from the population centers.[1]

With good seeing even a smartphone could quite clearly show the lower left curve of Jupiter and right curve and ring pattern of Saturn. Once we were on the western side of Eagle Mountain there was about a good hour or so of viewing the “sure looks like they are touching” conjunction.

I would highly recommend the article in the online version of Sky and Telescope Magazine by Bob King. [2]

Next Bob King shows a step by step processing that will result in the final conjunction using multiple photos a few days apart.

Next Bob King shows a step by step processing that will result in the final conjunction using multiple photos a few days apart.

Now the zoomed-in version showing both the Jupiter system with its four Galilean moons and Saturn with the large moon Titan and Saturn’s spectacular rings.

As we studied the Book of Mormon account of the birth of Christ, I was again impressed at the “night without darkness” ultra-high powered event described just before discussing the new star. And, could clues from gravity controlled conjunctions as we have now witnessed give us insights into how the Star of Bethlehem and the night without darkness became a reality during the same day? Could they be parts of the same sign?

Something to think about.

But, first, let’s next review the new theories just recently being formed and promoted about the creation of the Solar System, where both Jupiter and Saturn play starring roles.