The Buzz around “Once I Was a Beehive” | Meridian Magazine 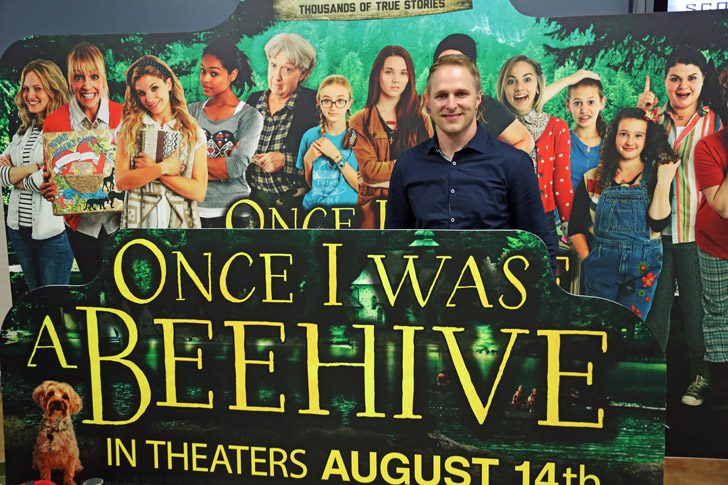 The Buzz around “Once I Was a Beehive”

I am an enthusiastic supporter of independent LDS film ventures, though they are admittedly uneven. Still, you have to admire the sheer chutzpah of a filmmaker to venture out into this world where you are up against the big boys and girls in Hollywood who have tens of millions of dollars in film production budget, dazzling special effects, stunts like hanging off an airplane as in the latest Mission Impossible which took six months of planning for that one sequence alone.

What are LDS filmmakers thinking to enter a field with such stiff competition, knowing their film will open in few theaters, and even then, will have to fight for life, hoping their first weekend returns will merit their remaining there? Who are these Davids who go up against such Goliaths?

They are people who deserve our support as they try to create films that will reflect warmth and truth in a world that goes after edginess, slick production values and a corroded moral view. They are trying to give Latter-day Saints a voice in the film industry with a different kind of sensibility—certainly a worthy goal. And frankly, they can’t grow in sophistication or quality without lots of us buying tickets to the movies and supporting their efforts.

That’s why, even though Meridian has run a review on Once I was a Beehive, I wanted to add a word. We attended the premiere this week, along with the cast and crew and enthusiastic family members. I actually thought about the possibility of staying home and cleaning my house instead because I wasn’t so sure I would actually like the movie.

The title made me think it would be cheesy, perhaps only appropriate for a seventh grader. I thought if there were humor, it would hardly rise to sophomoric. (Beehives, after all, are much younger than that.)

I was so wrong. In fact, I am writing this so that if you have a chance to attend the film, which opens August 14, you will go this first weekend, helping this film to have a chance for a little reach. You can see the locations it is playing here, which are currently only in Utah.

This is a film that hits just the right notes, beginning with a script that really works. The script is deft and funny, poignant and searching, with characters who are clearly drawn and memorable. The pacing really works.

It is written by the director MacLain Nelson, best known for his role as Elder Propst in The Saratov Approach and Lisa Valentine Clark and Haily Smith, who star as unforgettable camp leaders in the film. Admittedly this is a film about going to camp and the petty and funny things that happen there, but somehow it is also very charming.

Lane Speer is a 16-year-old whose father is a smiling and expanding presence in her life until he dies of cancer and within the year her mother goes on to remarry a Mormon she met in the cancer support group. Still aching, Lane gets drummed into a Mormon girl’s camp, in part to protect Phoebe, a new Beehive, who claims she has 60% of the listed anxieties in Wikipedia and dreads camp for the assorted number of terrors that lie there. Slight, bespectacled Phoebe can hardly stop talking, but it is because she is smart and endlessly interested.

They are both recruited for camp by Sister Carrington, the camp director who makes anyone else who ever thought of magnifying their calling look like a piker. It would have been easy to go over the top into the ridiculous with her character, but the writers manage instead to make her hilarious. You want to cringe when she is so excited to be bringing a non-member along, and you can’t help but laugh with the exaggerated surprises she has at every turn for the girls to make this camp a spiritual experience.

She is the perfect caricature of Mormon devotion to a calling and the Young Women are caricatures of our youth. The story shouldn’t have worked, but it did. The audience alternately laughed and cried—and also experienced some moments of tension—all of this based on the story of a week at camp where in actuality very little happened.

That is clever, character-driven writing and directing. There were no stingers here. And you are left with a funny question, “Why in the world do we call girls of this age Beehives? Wouldn’t it have been better to call them Bees?”

Go see the film this weekend, and you, too, can ponder that question. Meanwhile, if you want to look for showings in your area, or possibly book a theater and invite your favorite 200 friends, instructions are on the website at www.girlscampmovie.com

I went on Tuesday to see the movie "Once I was a Beehive" because there was nothing else decent to watch. I Loved the show. It was so funny and lighthearted. I wish we had more fun and clean movies. Keep up the good work in making good movies.

You know in Spanish they actually do call the beehive age group "little bees." It wouldn't be a stretch to change the name in English except due to the ever-present restraints of tradition.