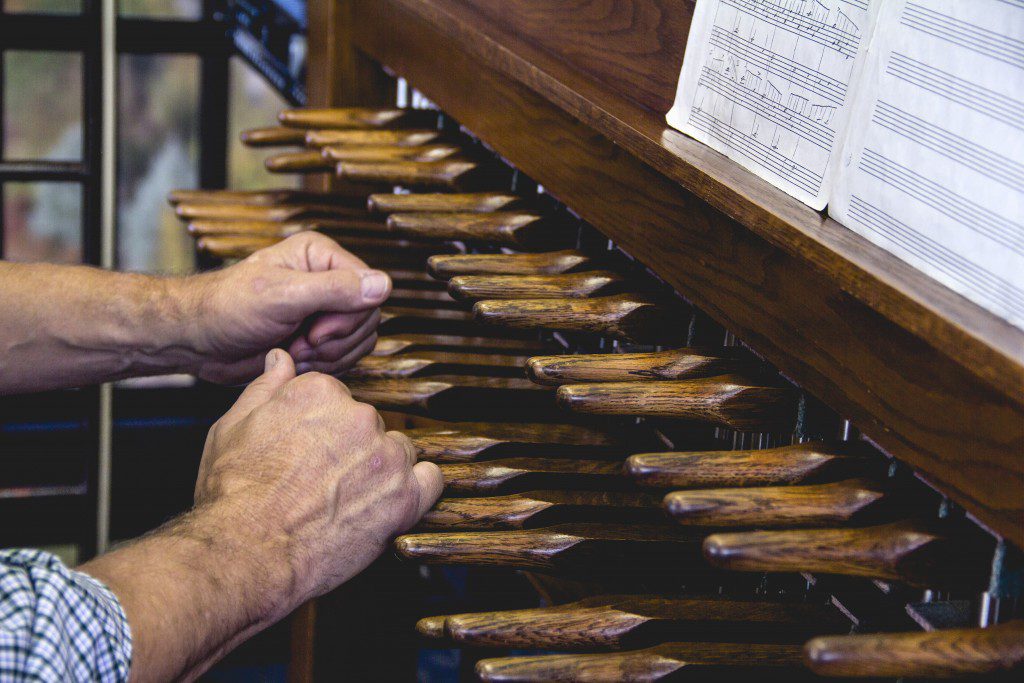 As Don Cook, a BYU professor, ascends the 110 metal stairs within the Centennial Carillon Tower on campus, he prepares to play for his audience: everyone in Provo. There are four octaves of notes at his disposal: 52 bells, each connected to a dowel-like wooden key. Some keys require as much as five pounds of force to bring the bells to life. From this perch far above Provo, all the world’s an audience.

The Centennial Carillon Tower was dedicated in October 1975 to mark Brigham Young University’s 100th anniversary. Now, 40 years later, the tower has reached its own remarkable milestone. Its anniversary celebrations throughout October and November have included several recitals, featuring compositions from BYU faculty, Halloween-themed tunes and a performance from world-renowned carillonneur Arie Abbenes.

The term carillon describes the instrument within the tower used to control the bells housed at the top. Each bell is connected to a wooden key that is hit with the carillonneur’s fist—the force required to bring down the keys can result in injuries if practiced too intensely or too frequently. At the base of the carillon keyboard, a row of pedals allows the carillonneur to control certain bells with feet rather than fists.

Although both the organ and the carillon have pedals, Cook, who also teaches organ lessons, says the similarities stop there. While the organ plays at a consistent volume no matter the pressure placed on the key, the carillon responds to varying amounts of force placed on the wooden keys.

“On the carillon, you have expressive possibility with every key you play,” Cook said.

Students aspiring to play the carillon must audition for Cook, earning permission to enroll in the one-semester carillon instruction course only after demonstrating their musical proficiency. Once enrolled, around half of the semester is spent in the practice room at the base of the tower, where students hone their skills on the practice instrument before they are permitted to play for campus. Students proficient in the organ often find their familiarity with foot pedals advantageous when transitioning to the carillon—but many excel with only a piano background, and other carillon students have experience primarily with percussion.

When Parker Ludwig, now an associate carillonneur, took Cook’s carillon class, he picked up an entire semester’s worth of material within two weeks. He has gone on to become one of the best carillonneurs the university has produced, according to Cook.

Several of Cook’s former students, including professors Neil Thornock and Brian Mathias, have received national acclaim for their performances and compositions. Ludwig hopes to join their ranks by performing in a national carillon congress this summer.

For his captive audience, Cook said, “[The music] just becomes a part of being at BYU. People tell me ‘I didn’t realize how much I appreciated it until I was back at BYU and heard the carillon, and it brought back so many memories.’ It’s just fun to be a part of other people’s stories.”

On the hour an automated system takes over the bells to play the first couple of lines of the Mormon hymn “Come, Come Ye Saints” and chime the hour. On the half hour the automated system also chimes. Otherwise, every performance is live.

“We play every day at noon, before and after devotional, and on other special occasions. And then whenever we want,” Cook said.

Cook and his students learn a large selection of music composed specifically for the carillon, taking advantage of the bells’ unique sounds. As the bells were cast, five tones were tuned into each bell. When Cook plays the tenor C note bell, the tone emanates from the largest portion at the bottom of the bell—but the minor third also resonates from higher up, in the waist of the bell. As a result, songs played on a major scale often sound dissonant and jarring as a result.

“Major thirds on a carillon are not in tune with one another,” Cook said. “The music that works best is built on a foundation of minor thirds.”

However, composers can also embrace the dissonance that results from major chords.

“Some people aren’t going to love it. They think it is out of tune because the overtones are different,” Cook said. “But there are people who appreciate it.”

To appeal to diverse music tastes across campus, Cook tries to accommodate a wide variety of styles in the songs played on the carillon. Common pieces include tunes from popular movies, like the Harry Potter theme or “Edelweiss”; classical pieces like “Jesu Joy of Man’s Desiring”; and arrangements of hymns.

The familiar tune of “Come, Come Ye Saints” has marked the hour since the Carillon Tower’s dedication in 1975. For the last 40 years, these familiar notes have resonated throughout BYU and accomplished the purpose outlined in the tower’s dedicatory program: “As each hour passes, it will remind all within its voice that for those who struggle toward perfection with faith in Christ, ‘all is well.’”

Can you have some of the music on you tube so we can all hear what it sounds like. Thank