Why were the People of Ammon Exempted from Military Duty? | Meridian Magazine 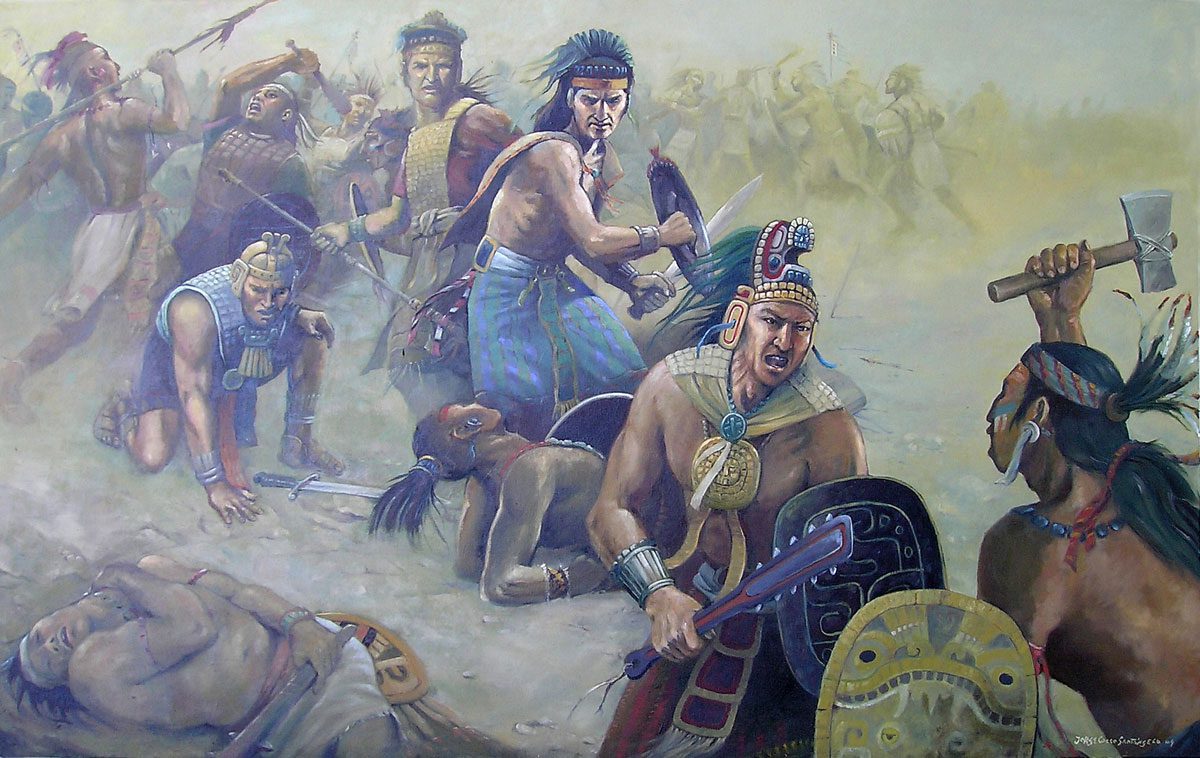 Why were the People of Ammon Exempted from Military Duty?

And we will guard them from their enemies with our armies, on condition that they will give us a portion of their substance to assist us that we may maintain our armies.
Alma 27:24

The Book of Mormon absolutely decries murder, bloodshed, and aggressive warfare whenever possible. One of the most remarkable accounts of conscious objection is that of the Anti-Nephi-Lehies, also called Ammonites. They were so profoundly converted to the gospel of peace that they promised God, as a part of their covenant of repentance, that they would never “use weapons again for the shedding of man’s blood” (Alma 24:18).[1]

After many Ammonites were killed, rather than break their promise, the Nephites took these war refugees in and gave them the Land of Jershon as a refuge from their enemies. The Nephite Prophet Alma even granted them an exemption from the normal requirement that all able-bodied men had to serve in the military, and the Nephites as a people agreed to “set our armies between the land Jershon and the land Nephi, that we may protect our brethren in the land Jershon” (Alma 27:23).[2]

Legal scholar John W. Welch has suggested that the specific terms of this notable exemption from military duty may have been grounded in ancient Israelite law and its traditional interpretation. He had several reasons for this assertion:

The legal requirement in Deuteronomy 20:1–2 speaks only of going out to battle “against thine enemies.” Later Jewish Rabbis interpreted enemies to be of a completely different tribe or people, and explicitly stated that the tribes of Israel should not fight against their brethren, for example, “not Judah against Simeon or Simeon against Benjamin.”[3] As Welch noted, “A similar understanding may be reflected in the Ammonites’ refusal to ‘take up arms against their brethren,’” the Lamanites (Alma 24:6, 18; 27:23).[4]

Deuteronomy 20:8 provided a military exemption for those who were “fearful and fainthearted.” As Welch has explained, “Since everyone going into battle was likely ‘fearful and fainthearted,’ the exemption undoubtedly had a narrower meaning in actual practice; otherwise nearly everyone would have been exempt. Indeed, as the Talmud clarifies, this expression in Deuteronomy ‘alludes to one who is afraid because of the transgressions he had committed.’”[5]

This is strikingly similar to the stated reason why the people of Ammon were afraid to take up arms. The Book of Mormon reports that they “never did look upon death with any degree of terror” (Alma 27:28), but that they did “fear to take up arms against their brethren lest they should commit sin” (v. 23).[6] They did this, in large part, because they knew that having been forgiven once of their serious past sins, it would be even harder for them to be forgiven of repeated transgressions (see Alma 24:10).

Welch also noted that the Jewish rabbis “limited the exemption for the fearful and fainthearted to voluntary exploits of the king. In a compulsory war of national defense, however, even the fainthearted were obligated to go into battle.”[7] With this in mind, it is notable that the people of Ammon contemplated breaking their oath when their protectors, the Nephites, were on the brink of losing a major defensive military conflict (see Alma 53:13).

This moral dilemma, and perhaps the uncertainty concerning the legal option to fight, was ultimately settled when the prophet and high priest Helaman persuaded the Ammonite men to keep the “oath which they had made” (Alma 53:15), although they willingly allowed their young sons to serve, who had not made that oath several years before.

In addition, rabbinical writings suggested that those who had been exempted from the actual fighting still held a legal obligation to “furnish water and food and repair the roads.”[8] In other words, they were to support and provide necessities in the rear.[9] This is notable, considering that the Nephites exempted the people of Ammon from combative military duty on the stated “condition that they will give us [the Nephites] a portion of their substance to assist us that we may maintain our armies” (Alma 27:24).

After developing these points, Welch concluded, “The rare exemption granted to the Ammonites was logical, religiously motivated, and consistent with ancient Israelite law, as embedded in Deuteronomy and elsewhere, which placed a high civic obligation on all citizens to contribute, as appropriate, to the defense of their country, their God, their religion, and their people.”[10]

Recognizing that this notable military exemption is consistent with several aspects of ancient Israelite legal statutes and practices can deeply enrich a reader’s understanding of this important narrative.

In several instances in the Old Testament, Israel’s solders were divinely protected when facing much larger or more experienced enemy forces.[11] For example, the Lord had Gideon take steps to deliberately reduce Israel’s fighting force to a small contingent of courageous soldiers. Yet with this small force they were able to easily conquer a much larger Midianite army (see Judges 7). It seems that the legal provisions for military exemptions found in Deuteronomy were designed to teach a universal principle: ultimately, military success does not depend on the number of soldiers or munitions, but on how righteously and courageously people follow the will of God and keep their covenants.

The moral dilemma faced by the Ammonite fathers is also instructive. If an exemption from military duty could be legally overridden by a dire threat to their new nation’s safety, as demonstrated in Welch’s third point, then the people of Ammon may have been unsure what moral obligation held the highest priority. Were they to hold to their former covenant to not take up arms? Or did a growing legal obligation to defend their nation in its dire circumstances supersede their former oath?[12] Elder Richard G. Scott called this a “critical moment of their spiritual lives.”[13] And they chose wisely, under very difficult circumstances.

The world today is filled with moral dilemmas of a similar nature. The message of the Book of Mormon is that following the prophet and keeping one’s covenants with the Lord are always transcending moral imperatives. Elder Scott taught, “Their wise priesthood leader, Helaman, knew that breaking a covenant with the Lord is never justified.”[14] This is true, even if such conduct would in other circumstances be legally justified or morally correct.[15]

Because the people of Ammon heeded Helaman and faithfully kept their covenant, the Lord provided an inspired, though unexpected, solution to their dilemma. Over two thousand Ammonite sons would fight instead of their fathers, despite that these sons “never had fought” (Alma 56:47) and were “very young” (v. 46).[16]

Though the sons fought in fierce battles where all received at least some injury, not one life was lost. The young men proved to be a vital boost to the weary Nephite army. They were faithful and spiritually stronger when they returned home. Their families were blessed, protected, and strengthened. In our day, countless students of the Book of Mormon have been edified by the example of these pure and righteous sons.[17]

This inspiring scriptural account demonstrates many things. First, it shows that prophets have a divine capacity and calling to understand and define covenantal obligations. It also depicts how faith, sacrifice, and obedience to covenants are keys to truly solving life’s dilemmas—especially when there seems to be no good options or when one is faced with two competing ethical pressures. The Book of Mormon can help “awaken you to a sense of your duty to God” (Alma 7:22), and as President Thomas S. Monson has taught, “The old adage is ever true: ‘Do your duty, that is best; leave unto the Lord the rest.’”[18]

[6] For further explanation about why the people of Ammon may have been concerned about their former sins, see Richard G. Scott, “Personal Strength through the Atonement of Jesus Christ,” Ensign, November 2013, 81–84, online at lds.org.

[9] For a discussion of supplying armies in ancient America, see Book of Mormon Central, “How Did Helaman’s Army Maintain Faith While Being Cut Off from Provisions? (Alma 58:37),” KnoWhy 167 (August 17, 2016); notes 2–7 are particularly relevant to this topic. For supplying armies in the ancient Near East, see Stephanie Dalley, “Erra and Ishum” in The Context of Scripture, 3 vols., ed. William W. Halo (Leiden: Brill, 2003), 1:411.

[13] Scott, “Personal Strength through the Atonement of Jesus Christ,” 82.

[14] Scott, “Personal Strength through the Atonement of Jesus Christ,” 82.

[15] Joseph Smith taught, “That which is wrong under one circumstance, may be, and often is, right under another. God said, ‘Thou shalt not kill’; at another time he said, ‘Thou shalt utterly destroy.’ This is the principle on which the government of heaven is conducted, by revelation adapted to the circumstances in which the children of the Kingdom are placed. Whatever God requires is right, no matter what it is, although we may not see the reason thereof till long after the events transpire.” History, 1838–1856, volume D-1, p. 3, online at josephsmithpapers.org.

[17] Scott, “Personal Strength through the Atonement of Jesus Christ,” 84.

Another factor is that the Anti-Nephi-Lehis were not citizens of the Nephite nation. The agreement between then and the Nephites was a classic Near Eastern treaty between sovereign nations, admitting them as a self-governing tributary, a "medinah," living within the larger nation. It was negotiated between them and the Chief Judge, and sent out to the Kol-ha-Am, the “Voice of the People,” i.e. the Parliament, for ratification. As tributaries, they would be normally expected to contribute to the national defense, but pacifism was to the advantage of the Nephites because (a) they were less likely to revolt, not being capable of it, and (b) it left more men at home to work the land and provide material support for the Nephites. So it worked out for everyone.