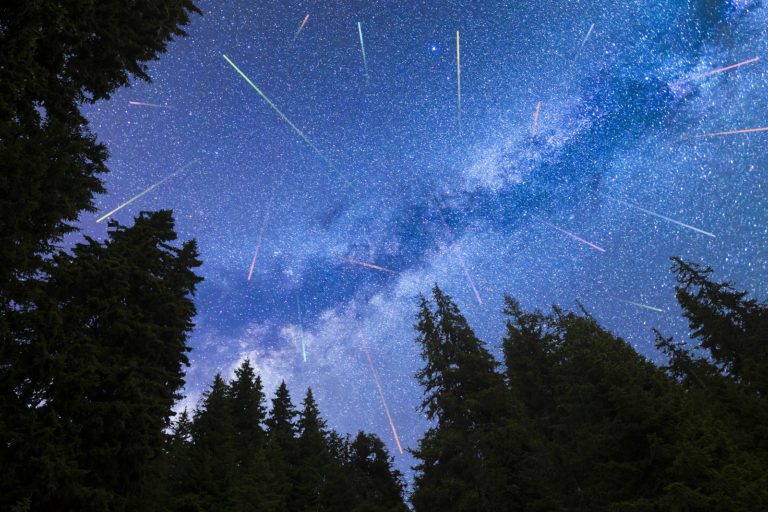 Why We Should Witness Firsthand the November Leonid Meteor Shower

The annual Leonid Meteor Shower in late November is caused by a non-descript small comet that has an orbit of 33 years and is tilted 22 degrees from the plane of the ecliptic. It is traveling around its orbit in a clockwise (retrograde) direction compared with the earth which goes in a counter-clockwise direction.

My testimony has been strengthened as I have witnessed and studied the annual display of this very unique comet, which has great importance in religious and American history.

The Leonids are known as a fast moving and energetic meteor stream where meteors are seen colliding head on with the earth at a speed of about 72 km/s (161,000 mph—very, very fast!). A typical 10 mm half a gram particle can generate a meteor trail nearly as bright as the planet Jupiter.[1]

Because the Tempel-Tuttle comet’s orbit passes very, very close to the earth’s orbit, not only are its 10-15 per hour meteors more energetic, but often end up being attention grabbing fireballs.[2]

And, when debris fields burned off by the Sun from the comet’s previous orbits occasionally line up exactly with the earth’s orbit, a “meteor storm” can fill the sky. Meteor storms range from small, 1000+ meteors per hour up to an amazing 200,000+ meteors per hour during the “Great Leonid Meteor Storm” of November 1833.

Caption: Debris fields are shown here from previous visits of the comet going past the intersection point of the two orbits and then onward to its perihelion closer to the Sun. A meteor storm results when the earth veers directly through a debris field or group of debris fields, each of which has its own sub orbit.

There had been some good displays in 1999 and 2000 that we had not seen first hand. But, the reports looked promising and my friend Chuck Sission and I were planning a trip, with a few hardy souls from our families, to see the Leonids at the nearby Cedar Valley Airport, just outside the lights of Utah Valley during the early morning of Sunday, November 18th, 2001.

Unfortunately, it was cloudy and we were about to cancel the trip, but, then decided to go anyway. And, it was still cloudy. And, then a hole opened up in the clouds and there it was, the constellation Leo with bright meteors being seen at a rate of about one meteor per second. O what a sight![5]

It was as though we were seeing a 100th scale playback of history: About 3,000 meteors per hour for a few hours. Yet, it wasn’t a playback, it was like a real-time run of a celestial program with a real comet, real debris fields, real earth and real meteors moving at top speed between exact intersection points in the solar system.

The 1833 gigantic meteor storm did get everyone’s attention. It immediately was judged by most Christians to be the sign where “the stars shall fall from heaven” (Matthew 24:29) and “the stars of heaven fell unto the earth” (Revelation 6:13).

The Prophet Joseph Smith declared that it was a true sign from heaven and fulfillment of prophecy.

It was, however, he said, only one of the prophesied occurrences of the stars falling from the heavens.  He also said that the last “stars falling” sign would directly precede the coming of the Lord Jesus Christ in the Millennium.[6]

On the other hand, William Miller, a Baptist minister and a leader of the Adventist movement, concluded that it was the one and only stars falling sign and then calculated that the Second Coming of the Savior would occur in 1843 to 1844.

When the Lord did not come, a “Great Disappointment” followed for millions of Christians in America who had followed Miller and others. The latter-day-saints were not deceived into believing in the incorrect Second Coming date, and after Joseph and Hyrum were martyred followed Brigham Young to settle the mountain west.[7]

See the Live Show at a Leonid Meteor Shower get-together near you! [8]

So, see the show with its energetic meteors, possible fireballs and, hopefully, seeing firsthand the effects of passing through the orbit of some of the perfectly synchronized highly energized comet dust and particles that enable an occasional, magnificent meteor storm.

“The Leonids are a prolific meteor shower associated with the comet Tempel–Tuttle, which are also known for their spectacular meteor storms that occur about every 33 years.”

“[the Leonids] are known for generating bright (apparent magnitude -1.5 [Jupiter is -2] ) meteors.”

“A Leonid fireball photographed during the meteor shower peak in November 2009. For this year’s shower, face east an hour before dawn for the best view.”

“Shortly before dawn on November 13, 1833, the greatest meteor storm in modern history was visible over North America with hundreds of thousands of bright meteors per hour. Not only was it a fulfillment of a specific prophesy that Joseph Smith had made, but this storm may have also been one of the signs of the establishment of the Church and Kingdom of God as prophesied in the Book of Revelation.”

“The plane of Temple-tuttle’s orbit is inclined to the planets of the Solar System.”

Diagram of meteor shower with meteors appearing to come from a single point in the sky.

“There might be a truly spectacular meteor shower during the pre-dawn hours of November 18, 1999. But it is not expected to rival the impressive meteor shower which occurred when the saints were expelled from Jackson County, Missouri in 1833.”

“If ever stars in the heavens had been on the move, it could not have excelled the sight. It appeared to me as some of the meteors, or stars, came down near to the surface of Silver Lake, on the banks of which I stood. And what makes it still more interesting was that a mob had assembled in Missouri to mob the Latter-day Saints who had just been driven from Jackson County, Missouri, and were in their tents, canopies, wagons and etc. on the banks of the Missouri River.” – quoting Parley P. Pratt.

[Google Summary: Sky watchers who saw it will never forget it: the 2001 Leonid meteor storm. The display began on Sunday morning, Nov. 18th, when Earth glided into a dust cloud shed by comet Tempel-Tuttle in 1766. Thousands of meteors per hour rained over North America and Hawaii.]

“I was once praying very earnestly to know the time of the coming of the Son of Man, when I heard a voice repeat the following: Joseph, my son, if thou livest until thou art eighty-five years old, thou shalt see the face of the Son of Man; therefore let this suffice, and trouble me no more on this matter. I was left thus, without being able to decide whether this coming referred to the beginning of the millennium or to some previous appearing, or whether I should die and thus see his face. I believe the coming of the Son of Man will not be any sooner than that time.”

RPMNote: Joseph Smith was very familiar with the concept of multiple fulfillment of prophecy as he pondered on how to interpret this revelation from the Lord that came during the Millerites’visit to Nauvoo. The appearance of the Savior at the Kirtland Temple on April 3, 1836 is an example of a “previous appearance” to His glorious actual Second Coming. Note how dangerous it can be in trying to interpret prophesy if we force a single fulfillment interpretation. Thus, as William Miller was pondering many correct truths, he then made the mistake of forcing a 1843 or 1844 Second Coming interpretation of the meteor storm in 1833. Hence, his example would seem to underline the clear need for a living prophet to interpret these signs correctly.

“November’s wonderful Leonid meteor shower happens every year around November 17 or 18, as our world crosses the orbital path of Comet 55P/Tempel-Tuttle. Like many comets, Tempel-Tuttle litters its orbit with bits of debris. It’s when this cometary debris enters Earth’s atmosphere and vaporizes that we see the Leonid meteor shower. In 2019, the peak of the shower is expected to be from midnight to dawn on Monday, November 18. However, a waning gibbous moon will light up the morning sky this year, to obtrude on this year’s Leonid meteor shower. In a dark sky, absent of moonlight, you can see up to 10 to 15 meteors per hour at its peak.”