Why Was Joseph Smith Accused of Being a “Disorderly Person” in 1826? | Meridian Magazine 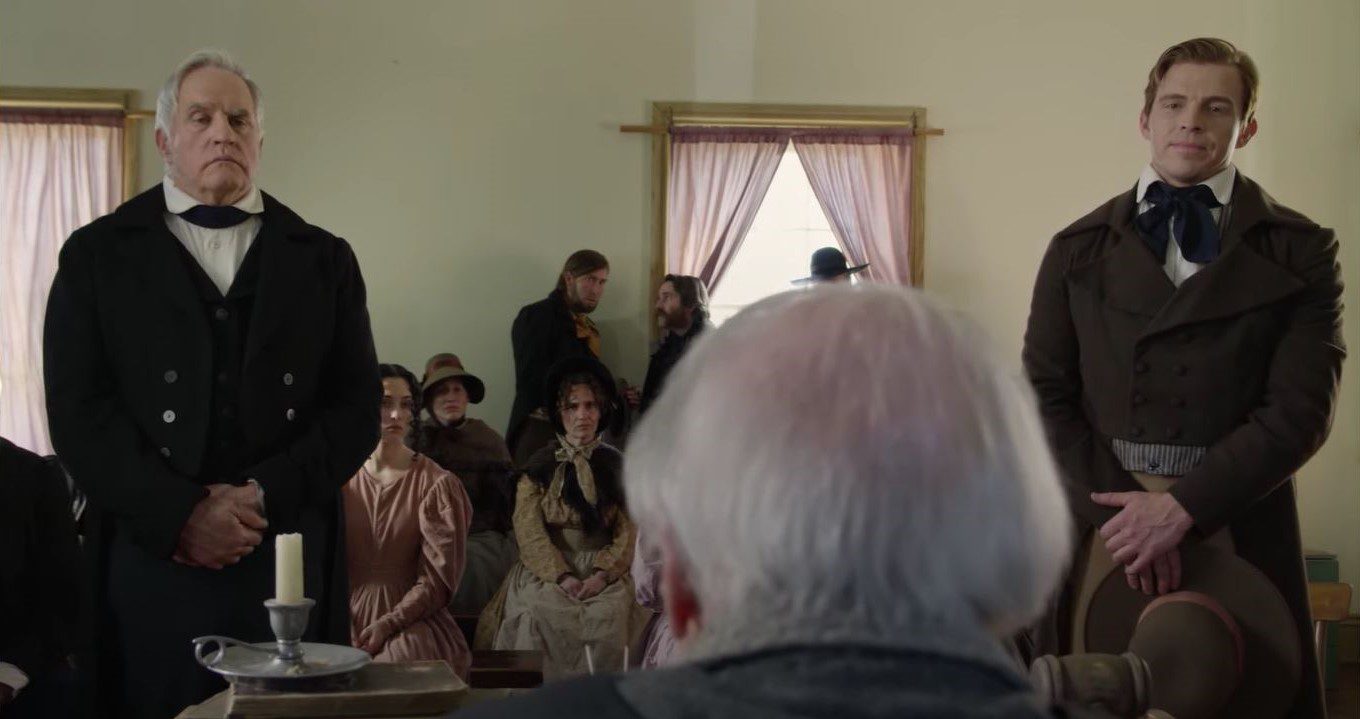 Why Was Joseph Smith Accused of Being a “Disorderly Person” in 1826?

“In October, 1825, I hired with an old gentleman by the name of Josiah Stoal [Stowell] …. He took me with the rest of his hands to dig for the silver mine, at which I continued to work for nearly a month, without success …. I prevailed with the old gentleman to cease digging after it. Hence arose the very prevalent story of my having been a money-digger” Joseph Smith—History 1:56

In 1825, at age 19, Joseph Smith was hired by a man named Josiah Stowell, who lived in South Bainbridge, near the New York-Pennsylvania border. Stowell believed there was an old Spanish silver mine with treasure buried nearby and had hired Joseph and his father to assist him in finding it. According to Joseph’s mother, Lucy Mack Smith, Stowell had heard that Joseph “was in possession of certain means, by which he could discern things that could not be seen by the natural eye.”[1] Stowell wanted Joseph to try to use those means (a seer stone) to attempt to locate the Spanish mine and treasure. After about a month working with this crew, Joseph persuaded Stowell to give up the attempt, but continued to work as a hired hand on Stowell’s farm (Joseph Smith—History 1:56).[2]

In March 1826, Peter Bridgeman, Stowell’s nephew, believed Joseph was scamming his uncle. Bridgeman thus brought legal charges against Joseph alleging that he was a “disorderly person,” a broad legal category in the in 1820s which included persons “pretending … to discover where lost goods may be found.”[3] Until recently, determining the details and outcome of this legal action has been difficult, due to the fact that local New York courts at this level were not courts of record, and so no original court transcript was created, and existing historical sources convey inconsistent and contradictory information.[4] Some critics have taken advantage of this lack of clear source materials and have claimed that Joseph was in fact found guilty and convicted of being a disorderly person.

Careful analysis of recently recovered sources by legal historian Gordon A. Madsen, however, indicates that there was no issuance of a guilty verdict in this case.[5] According to Madsen, the evidence indicates “that in 1826 Joseph Smith was indeed charged and tried for being a disorderly person and that he was acquitted. Whatever the gist of that charge, he was found guilty of no crime.”[6] At least four key pieces of factual evidence and judicial procedure support this conclusion.

First, the bills submitted for payment for the services rendered by Judge Albert Neely, who presided over the trial, and of Constable Philip De Zeng, who served the warrant for Joseph’s arrest, have been found. If Joseph Smith had been found guilty, according to Madsen, these bills would have included requests from the judge and the constable for additional payment for issuing a warrant committing Joseph to confinement and for having him officially transported there, respectively.[7] The lack of these items on the bills is prima facie evidence that Joseph was in fact not sentenced to serve time (up to 60 days) in “the bridewell, or house of correction,” as the applicable New York law clearly required of all persons found guilty of a disorderly person charge.[8]

Second, the two major accounts of the trial both agree that Josiah Stowell testified in Joseph’s favor. According to one source, Stowell testified “that he positively knew” that Joseph could find “valuable treasures through the medium of … [his seer] stone.”[9] Another source says that the judge asked Stowell, “you believe the prisoner can see by the aid of the stone fifty feet below the surface of the earth, as plainly as you can see what is on my table?” Stowell responded, “do I believe it? No, it is not a matter of belief. I positively know it to be true.”[10] Years later, Stowell’s son wrote a letter denying that Joseph ever “pretended to play the slight of hand,” which is another way of saying he was not a “juggler” or disorderly person.[11] In the same letter, Stowell himself confirmed that he knew Joseph to be a seer.[12]

New York law defined a disorderly person to be one who, among many other things, lived “idle without employment,” went begging, cheating, deceiving, or “pretending” to read palms, tell fortunes, or “to discover were lost goods may be found.”[13]  These terms do not describe Joseph Smith. The purpose of the statute was to keep out of town derelicts or vagabonds, not those who actually worked, were not vagrants, or really could see and find objects exercising the gift of seership, as plenty of people in those days did, and as Stowell soberly testified really was the case with Joseph.[14]

Third, the same applicable law required any such convicted person to be “removed by order of two justices of the peace.” However, the justices’ billing records show only one justice in this case.

And fourth, available legal case precedents in 19th century required that the undesirable actions of the person affect the public at large.[15] As Madsen points out, no one besides Stowell parted with any money, and “he emphatically denied that he had been deceived or defrauded.” Thus, since Joseph’s actions only impacted Stowell, and not the larger public, “only Josiah Stowell had any legal basis to complain, and he was not complaining.”[16] Thus, there was no legal grounds to charge Joseph as a disorderly person, and Justice Neely readily and correctly released him.

So, why was Joseph accused? There are at least four reasons.

1. To prepare Joseph to move on.

Harmony, Fayette, and New York were not where Joseph was to stay. He would be driven from one place to the next. The laws in every state at that time allowed local communities to exclude and expel undesirable people, such as vagrants and those who were not employed in ordinary lines of labor. These were laws that people could take advantage of. With no impunity, plaintiffs could complain about someone they didn’t like. Law could be used to make a public statement, to harass, to embarrass. Simply using the law as a club was enough, whatever the outcome. The plaintiff had made his case, even if he lost. In this case, Peter Bridgeman who had filed the complaint, didn’t appeal or press further charges, as he could have. He had made his point when the case was brought by the prosecutor on behalf of “the people of New York.”

2. To build confidence in the American system of independent, neutral judges.

There were four justices of the peace in Bainbridge. They all seemed friendly to Joseph. Zachariah Tarbell would perform his marriage to Emma ten months later in South Bainbridge. By being acquitted, Joseph learned to have trust in the American judicial system. This strong attitude remained with him throughout his life.

3. To strengthen testimony and give people a chance to speak in Joseph’s behalf.

Furthermore, Josiah Stowell himself—Joseph’s benefactor and the alleged “victim”—testified in Joseph’s favor and defense, both on this occasion and at another trial in 1830.[17] This speaks highly of Joseph’s character. By March 1826, Stowell had worked with Joseph for several months, both on his farm and out digging for the lost Spanish mine. He had several opportunities to learn about Joseph’s character, and to witness him using his divine gifts. His personal testimony rightly carried the greatest weight at the trial, and it should likewise hold great weight today. Stowell was confident that he was not being defrauded, that Joseph was sincere, and that he truly had the gift of seership.

At another trial three years later, Joseph was similarly accused by Martin Harris’s wife of having defrauded Martin Harris with his claims about having the golden plates. Like Stowell, however, Martin strongly and personally testified in Joseph’s favor.[18] For Joseph to have the confidence of these two older, more mature, and successful men who knew him well speaks highly of Joseph’s upstanding character.[19] The testimonies of Martin Harris and Josiah Stowell, each borne in New York courts of law, combined with the witness of Joseph’s youthful character established by the 1819 trial,[20] provides the requisite “two or three witnesses” (2 Corinthians 13:1) needed to establish that precisely during the years in which the Book of Mormon was coming forth, Joseph was a reliable, trustworthy, and gifted young man chosen by God to accomplish his purposes.

In 1838, Joseph Smith remembered that Moroni had prophesied that both “good and evil” would be spoken of him “among all people” (Joseph Smith—History 1:33). Among the ongoing examples of “evil” spoken of Joseph are accusations that he defrauded people out of their money, by fraudulently pretending to have the gift of seership. While rumors and hearsay filled with such accusations abounded, the claims made by Joseph’s critics never stood up to historical and legal scrutiny.

The acquittal of Joseph against charges of being a “disorderly person” in March 1826 provides but one example of the typical pattern. Skeptics who doubted the legitimacy of Joseph’s gifts failed to make a compelling case against him in the court of law, but that failure has not stopped critics still today from trying to pin these old charges on Joseph anew. Madsen’s skilled analysis of the 1826 trial clarifies the nature of the evidence and demonstrates that Joseph was truly found innocent of the charges brought against him.

[4] See Madsen, “Being Acquitted,” 71–72 for a summary of the existing primary sources.

[11] Josiah Stowell Jr. to John S. Fullmer, February 17, 1843, in Mark Ashurst-McGee, “The Josiah Stowell Jr.—John S. Fullmer Correspondence,” BYU Studies 38, no. 3 (1999): 113. The disorderly persons law, cited by Madsen, “Being Acquitted,” 74, included “all jugglers” defined as “those who cheat or deceive by sleight of hand or tricks of extraordinary dexterity.”

[14] See Brant A. Gardner, The Gift and Power: Translating the Book of Mormon (Salt Lake City, UT: Greg Kofford Books, 2011), 83–90 for a further discussion of what set legitimate seers apart from “disorderly persons.” Commenting on 1826 trial, Gardner observed, “The definition of disorderly persons was that they ‘pretend[ed] to have skill in physiognomy, palmistry or like crafty science or pretending to tell fortunes or to discover where lost goods may be found.’ Joseph’s defense was that it was no pretense. Both he and those who supported him believed that he did, in fact, possess the talents he professed” (p. 89).