Why They Can’t Stay Away: 3 Missionaries Returning to Italy | Meridian Magazine 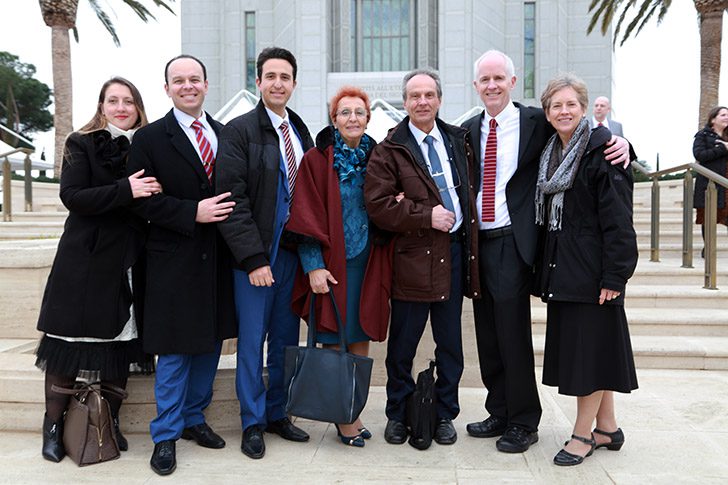 Why They Can’t Stay Away: 3 Missionaries Returning to Italy

As we interviewed people in line for the Rome Temple dedication, we found that more often than not, couples and families were there because they were former missionaries or mission presidents who had served in Italy years before. Many of them never imagined a temple could come to Italy in their lifetimes.

Some missionaries who had served in the past 10 years remembered how they had each been taken to the temple lot on their first day in the mission for the opportunity to find a quiet place in the field and dedicate their mission to the Lord. On our first day on the temple grounds, we witnessed a new group of missionaries sitting in the Visitors’ Center in front of the statues of the Christus and twelve apostles having the same opportunity. What a setting to begin a mission!

Former missionaries and mission presidents attended countless mission reunions during the week leading up to the dedication, reminiscing on the work they had done. We witnessed  many tender reunions on the temple piazza of mission companions or converts seeing their missionaries again for the first time in years. These missionaries couldn’t help but be drawn back to the land they had labored for to witness the dedication of the temple that is an answer to millions of prayers. The following are three stories of these incredible missionaries:

Former BYU basketball player Eric Mika took two years off his basketball career to serve in the Rome Italy Mission, but what made this mission call even more unique was that his girlfriend, Gabby, got the same call. When they both arrived in the mission, they let their mission president know, so the couple only saw each other twice their entire missions—once during transfers and another time at a mission-wide conference in Rome with Elder David A. Bednar. Eric said running into Gabby both times was definitely weird, but also showed him that they were still good friends even though they weren’t together and didn’t talk.

“All that being said, it was still one of the more embarrassing moments of my life when President Waddoups cracked a joke about how we were both there in the same room, and the entire mission was laughing,” he said. Since serving together, Eric has seen that even though it was strange while they were serving, it was no coincidence that they were both sent to Italy. When they returned home, they knew so many of the same missionaries, areas, and members and they both had a deep love for the Italian culture. Not only did Eric and Gabby end up getting married, they also returned to Italy to live for a year and half for Eric to play for two different Italian basketball teams—Pesaro and Brescia. Their mission in Italy did not end when they took off their tags.

Eric has had plenty of opportunity to share the gospel as a basketball player in Italy. When he signed for both teams, the media were so enthralled that he was a “Mormon” and that he had taken two years off his basketball career to serve a mission and emphasized that fact in every article published about him. Elder Alessandro Dini Ciacci, an Area Authority in Rome, was so excited about this publicity that he sent Eric a copy of every article with the words “Mormon” or “Latter-day Saint” in it underlined. After all of the media coverage, his reputation of being a member of The Church of Jesus Christ of Latter-day Saints preceded him wherever he went, and that opened up the opportunity to answer many questions and share the gospel.

“I had a really good relationship with one of my teammates last year. He was Italian and I felt like I needed to give him a Book of Mormon. Italians are all about “dedicas” (a little dedication or note to them)—they don’t just want a book, they want a note from you—so I wrote him a note and gave it to him.” Eric described how his teammate was discouraged and that he wanted him to know that he was loved. Eric bore his testimony to his teammate and later his this friend expressed how much he appreciated it.

Now, Eric and Gabby live in Germany playing for another team, and Eric thought with his game schedule, he wouldn’t be able to make it to Italy for the temple dedication. Two days before the dedication (Friday), Eric’s team won their game, changing around some of their schedule and giving him a free weekend. Saturday morning, he and Gabby bought tickets to Rome, and after a 17-hour layover in Amsterdam, arrived in time for a Sunday session of the dedication. They felt so happy to be there to see the temple dedicated in a land they have continued to love even after their missions. “I know it means the world to the members to have it close so that it’s easier to reach, but also to know and have an indication that all their faithfulness and hard work is paying off.”

Mike Pinnell took German in high school but did not particularly like his teacher. After his negative experiences in German class, he decided to take a Spanish class at BYU. He wanted to try a new language because he was convinced that if he were called on a German-speaking mission he would knock on doors and his old German teacher would be on the other side. To his chagrin, when his call came in the mail, he was assigned to serve in Switzerland. Though he was disappointed, he said to himself, “Ok, if that’s where the Lord wants me to go, I’ll go.”

Elder Pinnell staked out an Italian neighborhood for them to tract in that day and memorized a door approach and half of the first lesson in Italian. With some knowledge of Spanish, Italian wasn’t too hard for him to pick up. As the three of them went around the neighborhood knocking doors, they would greet people in German and all would reply they only spoke Italian. The day went on, and finally the mission president said, “Elder Pinnell, I didn’t know you spoke Italian.” He said, “No, I’m just learning President.” The mission president replied, “Oh I can tell, I can tell. If you still want to go to Italy, your ship will come in.” Three weeks later, Mike Pinnell was sent to open the city of Florence to the gospel.

Mike said about opening Florence, “When I was here, and all those years after, I would have never thought that in my lifetime there would be a temple in Rome.” Being at the temple dedication was surreal for him. Mike also said that participating in various mission reunions has been so special.

Though he served over 40 years ago, Mike attended one mission reunion at a stake center in Rome where multiple missionaries who served in 2008 recalled hearing the announcement of the temple from President Thomas S. Monson. Their mission president told them he had the impression they needed to attend the Italian translation of General Conference (in Rome, Conference is broadcast in Italian, Spanish and English). For new missionaries who were still learning Italian, this was a difficult request, but the mission president left the decision up to the missionaries. Many missionaries heeded his counsel, and it was during those sessions that the Rome Italy Temple was announced. The missionaries described how special it was to be with the Italian people when they heard this announcement and could hardly describe the joy and elation as they welled up with emotion. Missionaries from all generations feel the poignancy and significance of this new temple.

While Joel Scoville served as a missionary in Pisa 45 years ago, he and his companion would eat at the cafeteria of the University of Pisa every day. During one of those lunches they met Paolo Menis, a university student. He was a quiet young man, and as the two Elders started teaching him the gospel, they had a hard time discerning what he was thinking or feeling about the gospel.

Joel said, “We would ask ourselves, ‘Do you think he believes it?’ We didn’t know, even until the end. We said, ‘Well, you should be baptized,” and we didn’t know what he would say.” Paolo agreed and was baptized soon after. These young missionaries couldn’t have foreseen that they were baptizing a future leader of the Church in Italy.

Soon after getting baptized, Paolo moved down to Naples where he met his wife Susy. Soon after getting married, they traveled to the temple in Switzerland to be sealed. As time passed, they had two sons, Michele and Daniele. Paolo served as branch president of the Ostia Branch outside of Rome for about 10 years and was branch president in Naples, too. Both Michele and Daniele served missions, and now Michele is the bishop of the Rome 4 Ward.

“I am the fruit of the work of these missionaries,” Michele said. “When [Joel] came for his second or third mission, he came to Rome and I had the opportunity to meet him and give thanks to him for his work as a missionary. I’m grateful for this. My life has changed because we are in the covenant.”

For over 40 years, Joel and Paolo have stayed in contact by calling each other. Unspeakable joy filled the family as they not only reunited with their missionary on the temple grounds but got to attend the first session of the temple dedication together at 9 a.m. on Sunday morning. Joel expressed gratitude for how much courage and sacrifice it took for Paolo and Susy to remain faithful even when the Church was new and few in numbers. “That was no small thing. That was a great sacrifice. They have been faithful all of these years.”

Paolo and Susy are thrilled to begin serving as new temple workers in the Rome Temple 10 days after the dedication.

I knew I couldn't stay away. I hadn't made plans to attend. Our whole family is planning a visit in the Summer. But, as the time drew near and the opportunity arose. I made quick short plans to help out with the open house. I felt I couldn't use too much time off work so I was only in Italy for three days. It seemed many other volunteers were drawn to come and help. They couldn't stay away either. I am so grateful I took this opportunity. The first tour I assisted with I was paired with the grand daughter (whom I knew of but had never met) of a woman who opened her door to me and my companion on 20 June 1977 in Torino.

I, too, served in the Great Italy Rome Mission during 1980-81 and was privileged to return for the first time just a few weeks ago to attend the Open House. Like so many others have already expressed, I have no more words. Only tears of gratitude at the miracles we have been able to witness with the announcement, building, and now dedication of this Sacred House of the Lord in the land of my ancestors. I am also 100% Italian and a convert to the Church! God bless our wonderful, Italian Saints, and all who will use this most sacred edifice!