Why do New Testament Words and Phrases Show Up in the Book of Mormon? Part 2: The Resurrected Jesus as the Source | Meridian Magazine 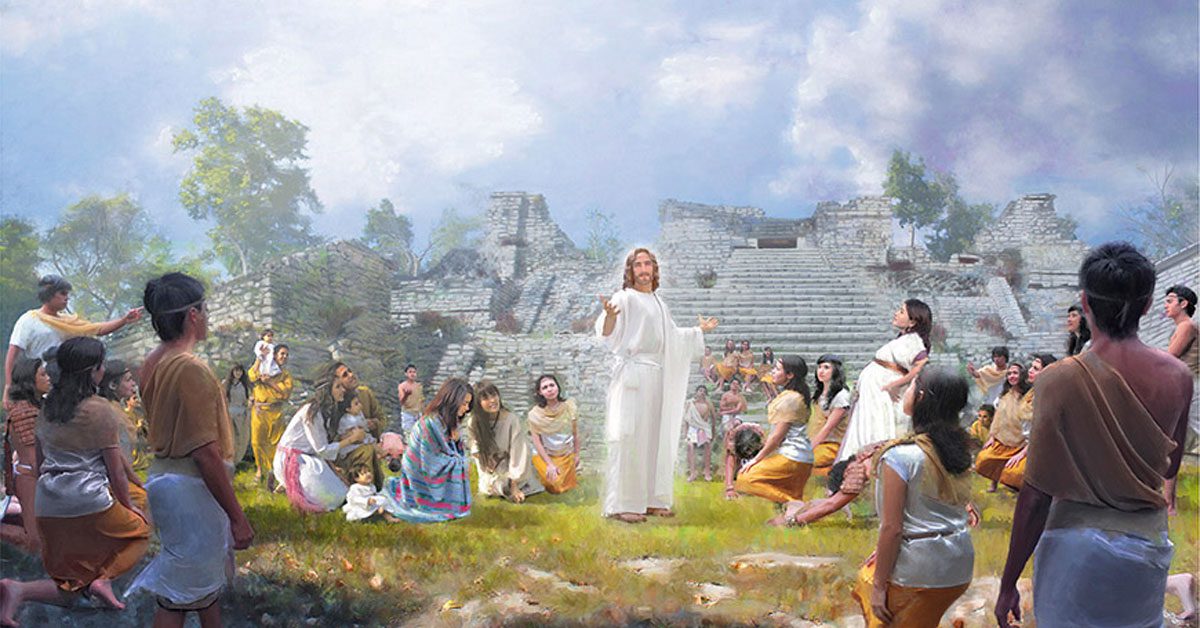 Why do New Testament Words and Phrases Show Up in the Book of Mormon? Part 2: The Resurrected Jesus as the Source

And behold, I am called Mormon … Behold, I am a disciple of Jesus Christ, the Son of God. I have been called of him to declare his word among his people. 3 Nephi 5:12–13

This is the second in a series of KnoWhys looking at the question of “Why Do New Testament Words and Phrases Show Up in the Book of Mormon?”

As was noted in Part 1 of this series of KnoWhys, readers of the Book of Mormon have always been aware of the existence of quotations from, allusions to, and echoes of biblical passages throughout the Book of Mormon. This KnoWhy (Part 2) explores the possibility of New Testament language entering into the Book of Mormon through Christ’s teachings to the Nephites.

It should first be noted that Jesus set the example of quoting His foundational teachings. For instance, at the end of His ministry among the Nephites, Jesus admonished the people, “Enter ye in at the strait gate; for strait is the gate, and narrow is the way that leads to life, and few there be that find it; but wide is the gate, and broad the way which leads to death, and many there be that travel therein” (3 Nephi 27:33). This statement inversely quotes from Christ’s early teachings in 3 Nephi 14:14 (about the strait and narrow way of life) and then 3 Nephi 14:13 (about the wide gate and broad way of death).1

As demonstrated in the following chart, Mormon and Moroni followed Christ’s example by quoting from or alluding to His teachings from the Sermon at the Temple recorded in 3 Nephi 12–14 (cf. Matthew 5–7).2

On the other hand, rather than referencing Christ’s recorded teachings in 3 Nephi, such as His Sermon at the Temple, some of Mormon and Moroni’s teachings instead quote or allude to New Testament teachings of Christ that were not recorded in 3 Nephi. A few examples are shown in the following chart.

How did these New Testament phrases find their way into Mormon’s and Moroni’s writings? Mormon opened up one very likely possibility when he explained that he could not record “even a hundredth part of the things which Jesus did truly teach unto the people” (3 Nephi 26:6; cf. 3 Nephi 28:33). In other words, Jesus could very well have taught these things to the Nephites, but they were simply not included in Mormon’s abridgment.

Furthermore, it should be remembered that on some occasions, Jesus spoke directly to Mormon and Moroni. His words to them on those occasions could have been similar to His words directly quoted or indirectly reflected in the books of the New Testament. Here are some examples that fit this scenario:

It is also important to remember that Mormon and Moroni abridged the earlier Nephite and Jaredite records.3 This might further explain why many New Testament parallels exist throughout the Book of Mormon. Additional possible reasons will be discussed in following entries in this series.

The Book of Mormon testifies that Christ appeared and spoke to descendants of Lehi in the New World. That being accepted as true, it makes sense that His words in 3 Nephi would be similar, with appropriate differences, to words that He had spoken in the Old World.

Jesus’ appointed ministers in the New World remembered and apparently immediately recorded the words of this extraordinary divine visitor. They were thus in a position, the very next day, to minister “those same words which Jesus had spoken—nothing varying from the words which Jesus had spoken” (3 Nephi 19:8). That being the case, it is not surprising that Joseph Smith’s divinely revealed translation should likewise accurately reflect the very words of the Lord Jesus Christ.

The Book of Mormon has been subtitled “Another Testament of Jesus Christ,” and many people have noted how often Christ is mentioned in its pages.4 Based on the above discussion, it is quite likely that readers of the Book of Mormon are actually encountering words of Christ more frequently than they may have realized.

All this helps to fulfill one of the main declared purposes of the Book of Mormon: “the convincing of the Jew and Gentile that Jesus is the Christ, the Eternal God” (Book of Mormon, Title Page). The more readers embrace the Book of Mormon, the more they will feast upon the words of Jesus Christ Himself, which will draw them closer to Him.

David E. Bokovoy and John A. Tvedtnes, Testaments: Links between the Book of Mormon and the Hebrew Bible (Tooele, UT: Heritage Press, 2003), 56–60.

1.Christ’s statements here seem to follow a Hebrew pattern of quotation known as Seidel’s Law, which entails repeating a quote in reverse order. For more on Seidel’s Law and Jesus’ reuse of the Sermon at the Temple later on in 3 Nephi, see John W. Welch, “Echoes from the Sermon on the Mount,” in The Sermon on the Mount in Latter-day Scripture, ed. Gaye Strathearn, Thomas A. Wayment, and Daniel L. Belnap (Provo, UT: Religious Studies Center, Brigham Young University; Salt Lake City: Deseret Book, 2010), 312–340; Seidel’s Law in the Book of Mormon is also discussed by David Bokovoy, “Inverted Quotations in the Book of Mormon,” FARMS Insights 13, no. 9 (2000): 2, and “Seidel’s Law,” in David E. Bokovoy and John A. Tvedtnes, Testaments: Links between the Book of Mormon and the Hebrew Bible (Tooele, UT: Heritage Press, 2003), 56–60.

The answer is very simple and you mentioned it at the bottom of part 1. Joseph did not "translate" the book of Mormon. He did not read the reformed Egyptian and put it in his own words. According to all the evidence, Joseph looked into the hat with the seerstone, saw the words, and read them to the scribe. So the words read by Joseph were of divine origin - revealed to him. Royal Skousen's work has shown that the supposed bad grammar- so troubling to early church scholars- is actually evidence of early Hebrew and even 16th century English. The reason for the similar phrases is that the Lord saw fit to translate the ideas from the plates into the same language used by Tyndale and King James translators. Doesn't that make sense if He wanted the Bible and the Book of Mormon to become "one stick" in the Lords hand? Ezekiel 37:17