Why Did the People Fall Down at the Feet of Jesus? | Meridian Magazine 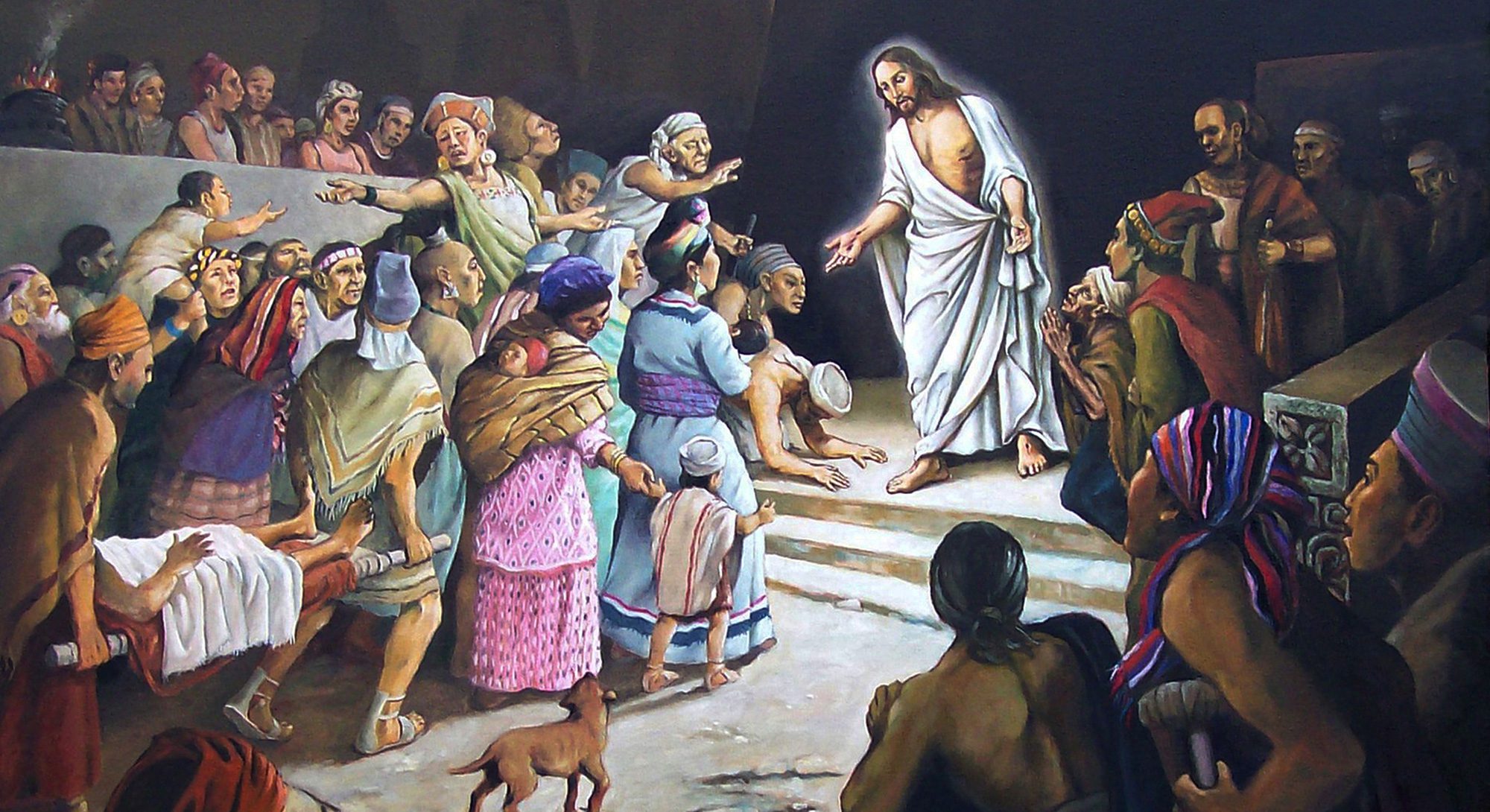 Why Did the People Fall Down at the Feet of Jesus?

And they did fall down at the feet of Jesus, and did worship him.

When Jesus Christ declared His true identity to the people of Nephi who were gathered around the temple in the land of Bountiful, “the whole multitude fell to the earth; for they remembered that it had been prophesied among them that Christ should show himself unto them” (3 Nephi 11:12). Similarly, after they had all gone forth and touched the wounds in His hands, feet, and side, they “did fall down at the feet of Jesus, and did worship him” (v. 17). And when Jesus commanded Nephi to come forth, He “bowed himself before the Lord and did kiss his feet” (v. 19, emphasis added for all verses).

The act of falling at the feet of a ruler and even kissing the ground or his feet was a well-known form of worship in the ancient world called proskynesis.[1] In an ancient Near Eastern letter, for example, a vassal showed respect to a Lord through phrases such as “[I am] your slave” and “the dust at your feet” and “I prostrate; at the feet of my king, my lord I fall.”[2] An ancient Egyptian liturgical text similarly declared, “As I kiss the ground, even so do I embrace Geb.”[3] According to Matthew L. Bowen, this text “prescribes proskynesis, including a ritual embrace of a god (Geb, the earth), as part of a ritualized theophany in a temple setting.”[4]

Proskynesis was also known to the ancient Israelites.[5] For instance, in Joseph’s dreams, his brothers’ sheaves and also the sun, moon, and stars paid homage to him. This prompted his father to ask, “Shall I and thy mother and thy brethren indeed come to bow down ourselves to thee to the earth?” (Genesis 37:10).[6] Psalm 95:6 reads “O come, let us worship and bow down: let us kneel before the Lord our maker.”

New Testament texts—such as Matthew, Mark, Luke, and Revelation—abundantly demonstrate that the early apostles and followers of Jesus viewed proskynesis as an appropriate mode of worshipping Jesus Christ both before and after His resurrection.[7]

Furthermore, demonstrations of falling to the earth in ritual prostration are evident in several Book of Mormon settings (in addition to 3 Nephi 11).[8] In Lehi’s dream of the tree of life, those who pressed forward and held to the rod of iron eventually “came forth and fell down and partook of the fruit of the tree” (1 Nephi 8:30, emphasis added). Bowen remarked, “The people of this third group are the true worshipers, and the tree of which they partake is functionally the true God, Jesus Christ.”[9]

When King Benjamin reported the words “delivered unto him by the angel,” he looked upon the multitude and saw that the people “had fallen to the earth … And they had viewed themselves in their own carnal state, even less than the dust of the earth” (Mosiah 4:1–2). Hugh Nibley commented,

This was the kind of proskynesis at which Benjamin aimed! The proskynesis was the falling to the earth (literally, “kissing the ground”) in the presence of the king by which all the human race on the day of the coronation demonstrated its submission to divine authority; it was an unfailing part of the Old World New Year’s rites as of any royal audience.[10]

Exploring the meaning of proskynesis in both its Old World and Book of Mormon contexts can help readers better understand what this ritual demonstration meant to those who worshipped Jesus Christ at the temple in the land of Bountiful.

For example, the phrase “[I am] … the dust at your feet” from the ancient Egyptian letter parallels the response of the people who, after hearing King Benjamin’s speech, fell to the earth and considered themselves as “even less than the dust of the earth” (Mosiah 4:2).[11] Bowen rhetorically asked,

Thus by falling to the ground, those who worshiped Christ at Bountiful ritually signified that their bodies were created from the dust of the earth, that they were mortal and fallen, and that they were willingly humbling themselves in the presence of their Creator.[13]

From a story in the New Testament, readers learn of a woman who washed the feet of Jesus with her tears, and “kissed his feet, and anointed them with the ointment” (Luke 7:38). Bowen explained, “Her physical proskynesis in kissing the feet of Jesus was a profound demonstration of the love of God and literally fulfilled the injunction of Psalm 2 to ‘kiss the Son’ or even (in an emended reading) to ‘kiss his [Yahweh’s] feet.’”[14]

Likewise, when Nephi (who may well have been familiar with such language found in many of the Psalms) “bowed himself before the Lord and did kiss his feet” at the temple in Bountiful (3 Nephi 11:19), it can be seen as a prescribed act of devotion for Him whose feet had “trodden the winepress alone,”[15] and whose feet bore the “prints of nails” of crucifixion, [16] and whose beautiful feet “bringeth good tidings of good.”[17]

In what can be seen as an act of proskynesis to His Father, Jesus Christ Himself submissively “fell on his face, and prayed” while suffering the agonies of the atonement in Gethsemane (Matthew 26:39). He also washed the feet of His apostles in an act of humility and service (see John 13:4–16). Those who fall at the feet of Him who “descended below all things”[18] and “kiss his feet … [and] bathe his feet with their tears,”[19] show their willingness to follow His example of service, humility, and obedience.

Worshipful prostration is an enduring symbol of love and devotion for deity. Nephi taught that the “right way is to believe in Christ … wherefore ye must bow down before him, and worship him with all your might” (2 Nephi 25:29). In 3 Nephi 19, Jesus again went a little ways away from the large assembly that had gathered on His second day at the Temple of Bountiful, “and bowed himself to the earth,” expressing profound gratitude to the Father (3 Nephi 19:19). Joseph Smith and Sidney Rigdon learned that before the throne of God “all things bow in humble reverence, and give him glory forever and ever” (Doctrine and Covenants 76:93).

Figure 5 Every Knee Shall Bow by J. Kirk Richards

Therefore, from the examples of those who worshipped Jesus Christ at the temple in Bountiful, readers can learn how to appropriately show reverence for the Lord when they eventually meet Him in person and behold His resurrected body. Of the eternal importance of bowing before our Lord and Master, Elder Neil L. Anderson has unambiguously testified, “I witness that Jesus Christ is the Savior of the world. He suffered and died for our sins and rose the third day. He is resurrected. In a future day, every knee will bow and every tongue confess that He is the Christ.”[20]

Elder Neal A. Maxwell has beautifully taught that, while Christ rejoices in our genuine goodness and achievements, “any assessment of where we stand in relation to Him tells us that we do not stand at all! We kneel!” and soon “all flesh shall see Him together. All knees shall bow in His presence, and all tongues confess His name. Knees which never before have assumed that posture for that purpose will do so then—and promptly.”[21]

Matthew L. Bowen, “‘They Came and Held Him by the Feet and Worshipped Him’: Proskynesis before Jesus in Its Biblical and Ancient Near Eastern Context,” Studies in the Bible and Antiquity 5 (2013): 63–68.

Matthew L. Bowen, “‘They Came Forth and Fell Down and Partook of the Fruit of the Tree’: Proskynesis in 3 Nephi 11:12–19 and 17:9–10 and Its Significance,” in Third Nephi: An Incomparable Scripture (Salt Lake City and Provo, UT: Deseret Book and Neal A. Maxwell Institute for Religious Scholarship, 2012), 107–130.

[1] See Hugh Nibley, An Approach to the Book of Mormon, The Collected Works of Hugh Nibley, Volume 6 (Salt Lake City and Provo, UT: Deseret Book and FARMS, 1988), 304 n. 22; Matthew L. Bowen, “‘They Came and Held Him by the Feet and Worshipped Him’: Proskynesis before Jesus in Its Biblical and Ancient Near Eastern Context,” Studies in the Bible and Antiquity 5 (2013): 63–68; Matthew L. Bowen, “‘They Came Forth and Fell Down and Partook of the Fruit of the Tree’: Proskynesis in 3 Nephi 11:12–19 and 17:9–10 and Its Significance,” in Third Nephi: An Incomparable Scripture (Salt Lake City and Provo, UT: Deseret Book and Neal A. Maxwell Institute for Religious Scholarship, 2012), 107–108: “Proskynesis, very literally ‘a kissing in the presence of,’ is a term the Greek historian Herodotus (Histories 1.134) originally applied to the ancient Persian custom of ‘prostrating oneself before persons and kissing their feet or the hem of their garment [or] the ground.’ The word in its broadest sense denotes the ‘hierarchical prostration of inferior to superior,’ but in a narrower, cultic sense it signifies ‘formal submission in the presence of a being from the divine realm.’ Hence, proskynesis is widely used by scholars as an umbrella term for similar rites known from Egypt to the Far East, whereby deities, kings, and other persons deified or thought to belong to the divine realm were so acknowledged and reverenced.”

[5] See Bowen, “They Came and Held Him,” 69–73. For an analysis of ritual prayer (including prostration) in Islam and its relationship with Judaic prayer, see Khaleel Mohammed, “The Foundation of Muslim Prayer,” Medieval Encounters 5, no. 1 (1999): 17–28.

[6] See Brent D. Shaw, Bringing in the Sheaves: Economy and Metaphor in the Roman World (Toronto, ON: University of Toronto Press, 2013), 398 n. 44. For a treatment of Joseph, the son of Jacob, as a type of Christ, see Andrew C. Skinner, “Finding Jesus Christ in the Old Testament,” Ensign, June 2002, online at lds.org.

[7] Bowen, “They Came and Held Him,” 73–88; Stuart Bevan, “Proskynesis in the Synoptics: A Textual Analysis of

[8] In addition to the examples of the tree of life and King Benjamin’s speech, numerous instances of proskynesis can be found in the Book of Mormon. See Matthew L. Bowen, “And Behold, They Had Fallen to the Earth”: An Examination of Proskynesis in the Book of Mormon,” Studia Antiqua 4, no. 1 (2005): 91–110.

This reminds me of the memorable and magnificent last testimony of Bruce R. McConkie,“I am one of his witnesses, and in a coming day I shall feel the nail marks in his hands and in his feet and shall wet his feet with my tears. But I shall not know any better then than I know now that he is God’s Almighty Son.” Thanks