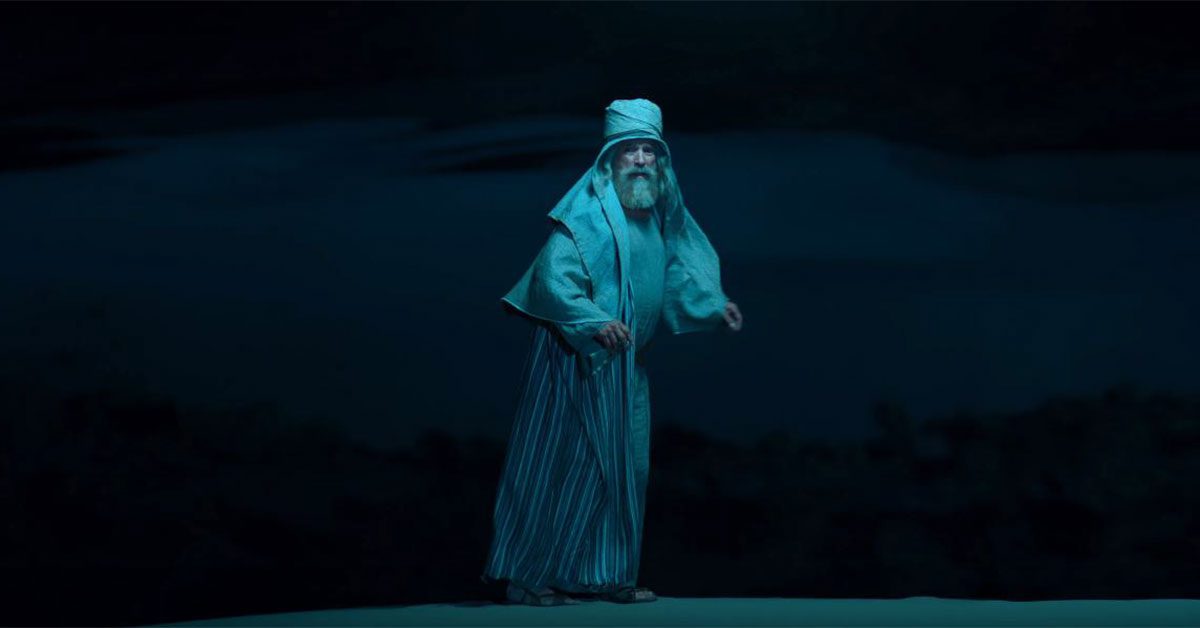 Why Did Lehi and Jeremiah Find Themselves in a Dark and Dreary Wilderness?

To view this article on Book of Mormon Central, CLICK HERE.

“And it came to pass that as I followed him, I beheld myself that I was in a dark and dreary waste” 1 Nephi 8:7

Lehi’s dream of the tree of life evokes themes, teachings, and images that authentically reflect the ancient world, his personal circumstances, and that of his family. Lehi said,

In his pioneering study of Lehi’s trail, Hugh Nibley observed, “It is the standard nightmare of the Arab and it is the supreme boast of every poet that he has traveled long distances through dark and dreary wastes all alone.” He compared Lehi’s account with descriptions from Arab writers of a terrifying darkness, which sometimes enveloped the traveler. These mists, which have been reported throughout the Arabian desert, are “a depressing mixture of dust, and clammy fog, which, added to the night, completes the confusion of any who wander in the waste.”1

The prophecies of Jeremiah, Lehi’s contemporary, also share many elements with the revelations and teachings of Lehi and his son Nephi. These can provide insight into the Book of Mormon. At the time of his dream, Lehi had been searching these records, which contained “many of the prophecies of Jeremiah” (1 Nephi 5:13). As he pondered the Lord’s words through this contemporary prophet, he would have found themes and teachings that echoed experiences and challenges of his own family.

In one of his earliest prophecies, Jeremiah recalled how the Lord had led Israel through “the wilderness, in a land of deserts and pits, in a land that no one passes through, where no one lives” (Jeremiah 2:6 NRSV).2 The Hebrew word translated in this verse as wilderness (midbar) denotes an uninhabited region or desert and could evoke “images of danger, darkness, and emptiness.”3 Some ancient Near Eastern traditions held that such regions were the habitation of demonic forces.4 Without a guide, it is a fearful place. “He who wanders there may suddenly be led astray, for there is no road.”5

The man Lehi encountered as he commenced his visionary journey reminds us of how the Lord guided the children of Israel through the wilderness. His appearance to Lehi and his invitation to follow him suggests that the Lord was mindful of Lehi just as he was mindful of his ancient ancestors and that Lehi should see himself and his family as following the pattern of Israel’s earlier journey.

In Jeremiah, the Lord reminds his people, “And I brought you into a plentiful country to eat the fruit thereof and the goodness thereof; but when ye entered, ye defiled my land, and made mine heritage an abomination” (Jeremiah 2:7). Through their wickedness they had turned the good land of their inheritance into a wilderness of evil.  “Graciously he brought his people from a desert into the veritable garden land they now inhabit, reversing the tragedy of Eden, as it were, but they repaid the favor by making the place an unspeakable mess.”6

In Jeremiah, the Lord asks with some irony, “Have I been a wilderness to Israel, or a land of thick darkness? Why then do my people say, ‘We are free, we will come to you no more’” (Jeremiah 2:31 NRSV). The Lord had been Israel’s faithful guide through desert, but now, “she has begun to treat Yahweh as the wilderness to be avoided at all costs.”7 The people who he lovingly redeemed no longer wished to follow him. The words “wilderness” and “waste” are noteworthy in Jeremiah because they not only recall a desert-like environment of the Exodus, but also describe the condition of the land following the destruction of Judah by invading enemy armies leaving the land and its cities in ashes and ruins.

We may not fully appreciate the difficulty each prophet faced in preaching to a wicked and unrepentant people, being rejected, and knowing that destruction was coming to the place where they lived and to the people they had loved. Jeremiah seemed nearly overwhelmed by the vision of coming destruction (Jeremiah 4:19–20). He compared the aftermath to a disorienting chaos of creation undone, “And I beheld, and lo, there was no man, and all the birds of the heavens were fled. I beheld, and lo, the fruitful place was a wilderness, and all the cities thereof were broken down” (Jeremiah 4:26).

Such prophecies on the plates of brass would have resonated with Lehi’s experiences. His vision had caused him to “quake and tremble exceedingly” (1 Nephi 1:6).  The loss and rejection of former friends and being uprooted from the ancestral land of his inheritance would have been traumatic. One can imagine Lehi, as he pressed through the dark and fearful waste of the visionary landscape, occasionally seeing the haunting, lifeless ruins of familiar sites and his former home.

It is significant that, even after Lehi chose to follow the man in his dream, that he still had to travel many hours through fear and darkness. The dream prophetically suggests that Lehi would have to pass through many additional challenges in life which would require his continued effort, determination, and diligence before he would finally partake of the fruit of the tree of life.

Each of us can see ourselves in Lehi’s dream as we pass through our own wildernesses. We experience the desolation that comes with the death of precious loved ones and may wonder how we can go on. We face disappointment that may leave cherished dreams and long held expectations in ruins. This may be due to the careless and insensitive choices of others, mistakes we have made, or simply part of the difficulties and circumstances of life that we all must pass through. Regardless of the cause, the Lord is there and bids each of us to follow him with the promise that there will yet be joy and healing peace if we do.

It is a mistaken idea that those who follow the Lord will live lives free opposition and difficulty.  Elder Jeffrey R. Holland taught, “It is the plain and very sobering truth that before [and after] great moments, certainly . . . great spiritual moments, there can come adversity, opposition, and darkness.”8 During such times, our understanding may be limited, but we can be true to the light that we have been given, even as we seek to obtain more. Elder Boyd K. Packer warned:

We may wonder why the Lord allows us to pass through times of difficulty and darkness, even when we feel we are doing all we can to follow him and choose what is right. Elder Orson Pratt taught that these challenges are not without a purpose.

Is it not absolutely necessary that God should in some measure, withhold even from those walk before him in purity and integrity, a portion of his Spirit, that they may prove to themselves, their families and neighbors, and to the heavens whether they are full of integrity even in times when they have not so much of the Spirit to guide and influence them?

He then recalled Lehi’s own experience.

But notwithstanding this gift of prophecy, and the gifts of the Spirit which he enjoyed, the Lord showed him by this dream that there would be seasons of darkness through which he would have to pass, and that even then there was a guide. If he did not all the time have the Spirit of God upon him to any great extent, there was the word of God, represented by an iron rod, to guide him; and if he would hold fast to that in his hours of darkness and trial, when everything seemed to go against him, and not sever himself therefrom, it would finally bring him where he could partake of the fruit of the precious tree—the Tree of Life.10

Lehi said that he traveled through many hours in darkness, but it was not until he began to pray unto the Lord that he would have mercy on him that he found deliverance from the fearful darkness. The Prophet Zenos noted how merciful the Lord had been in hearing his prayer when he was in the wilderness (Alma 33:4), and Amulek taught how we all should “pour out our souls: unto God in prayer when we are “in our wilderness” (Alma 34:26). Each of us may experience that wilderness in different ways.

As we strive to follow the Lord’s direction and the inspired counsel of living apostles and prophets, we may find that we must sometimes step outside of our comfort zone and do things we have never done before. Elder Harold B Lee once counseled, “You must learn to walk to the edge of the light, and then a few steps into the darkness, then the light will appear and show the way before you.”11

Lehi learned through revelation and experience that we can be guided through hard times to a better place. His prophetic dream teaches us that when we are determined to follow the Lord, he will help us pass through our most desolate times. As we seek his help on our journey and continue to follow his counsel we can partake of his love which is “most desirable above all things” (1 Nephi 11:22), which restores us to life from desolation, to hope from despair, and is “the most joyous to the soul” (1 Nephi 11:23).

11.Boyd K. Packer, “The Edge of the Light,” BYU Magazine, March 1991. “There are times when we have to step into the darkness in faith, confident that God will place solid ground beneath our feet once we do.” Dieter F, Uchtdorf, “The Why of Priesthood Service,” Ensign, May 2012, 59.