Why Did Emma Smith Remain in Nauvoo after the Death of Joseph Smith? | Meridian Magazine 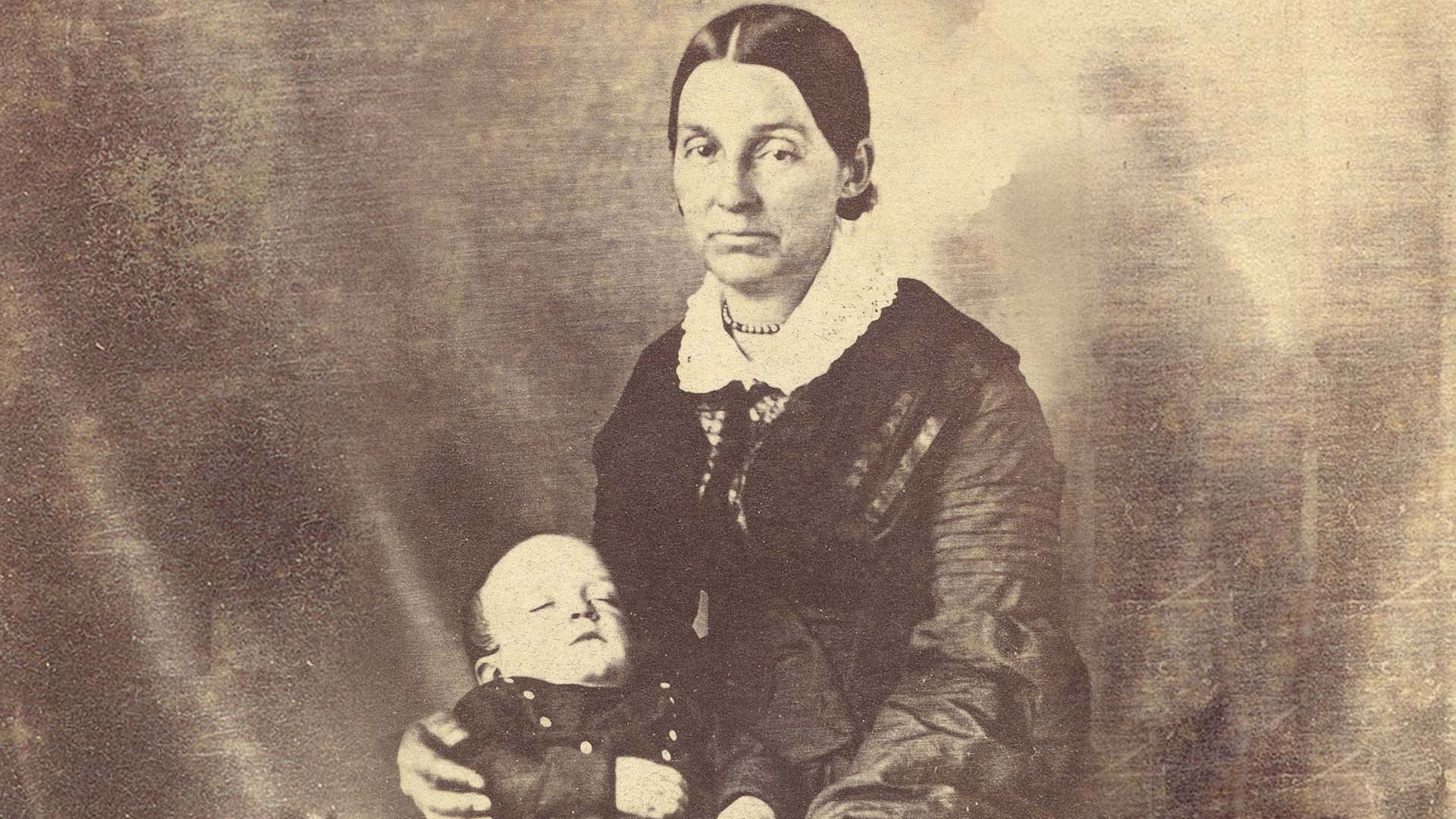 Why Did Emma Smith Remain in Nauvoo after the Death of Joseph Smith?

“And the office of thy calling shall be for a comfort unto my servant, Joseph Smith, Jun., thy husband, in his afflictions, with consoling words, in the spirit of meekness. And thou shalt go with him at the time of his going.” Doctrine and Covenants 25:5–6

Emma Smith was one of the most important leaders in the early Church. As a newlywed of less than a year, she was present at the Hill Cumorah when Joseph Smith received the gold plates from the angel Moroni on September 22, 1827. She was one of the earliest scribes of the Book of Mormon translation and left behind a significant historical record that broadens our understanding of how and when the translation of the Book of Mormon occurred.

Devoted to her husband and to her faith, Emma was driven from her childhood home in Pennsylvania to New York, Ohio, Missouri, and Illinois. During the Missouri persecutions of 1838–1839, Emma was forced to flee from that state with her children while Joseph Smith languished in Liberty Jail. Lucy Mack Smith, the mother of the Prophet, recorded this tribute to Emma:

I have never seen a woman in my life, who would endure every species of fatigue and hardship, from month to month, and from year to year, with that unflinching courage, zeal and patience, which she has always done. … She has breasted the storm of persecution, and buffeted the rage of men and devils, until she has been swallowed up in a sea of trouble which [would] have borne down almost any other woman.1

After Joseph Smith’s death in 1844, Emma remained in Nauvoo for the rest of her life rather than traveling on with the Saints, and for several years she did not associate herself with any of the groups linked to the Restoration. Why did Emma stay in Nauvoo after Joseph’s death?

Emma was devastated at the death of Joseph Smith. According to one witness, when she saw Joseph’s body, she spoke softly to him, saying, “Oh, Joseph, Joseph! My husband, my husband! Have they taken you from me at last!”2 At the time of Joseph’s death, Emma was pregnant with their last child and left to care for four young children alone. Going anywhere would have been extremely difficult. She was also left without much financial support, and she worried about how she could provide for her family (although in Nauvoo, she had a substantial home and considerable property). Legal claims regarding Joseph’s estate and Emma’s legal rights as Joseph’s widow remained to be sorted out—a process that would take over eight years to complete.3

Emma also kept aloof concerning the question of who should take Joseph’s place as leader of the Church.4 However, tensions soon began to rise between Emma and Church leadership over the ownership of Church properties, especially items like manuscripts of Joseph Smith’s new translation of the Bible and the Joseph Smith Egyptian papyri. Emma felt a special guardianship over the new translation materials, saying they “had been placed in her charge.”5

Emma initially refused to join any group vying for leadership of the Church. In the months following Joseph’s martyrdom, Brigham Young and the Quorum of the Twelve emerged as the most prominent leaders of the Church, especially because Joseph had rolled the authority of leadership onto the Twelve three months before his death.6 However, tensions between Emma and Brigham Young arose. Historian Jenny Reeder recounts, “Both Emma and Brigham Young were fiercely dedicated to Joseph for different reasons: he was committed to seeing the future success of the Church, while she was devoted to preserving her fatherless family.”7 Emma also had a complex relationship with plural marriage. Sources indicate that Emma participated in several plural marriages, but later in her life she appeared to deny her participation in or acquiescence to the practice.8

The rift between Emma and the Twelve widened when she married Lewis Bidamon on December 23, 1847—Joseph’s birthday. Bidamon was an alcoholic and a gambler in addition to being uninterested in organized religion, but he was also charming, affectionate, and protective of Emma.9 Most of the Saints had left Nauvoo by the time of the marriage, but Almon Babbitt, a Church leader left behind in Nauvoo to oversee Church interests, confronted Emma, accosting her about her decision to marry outside of the faith.10 Emma and Lewis never had children together, but he acted as a surrogate father to the Smith children. This and many other factors continued to widen the rift in the years following.

As the years continued, Emma and her oldest son, Joseph III, accepted leadership roles in the Reorganized Church of Jesus Christ of Latter Day Saints (today called the Community of Christ), with Joseph Smith III serving as president of that organization from 1860 to 1914.11 A few days before her death, Emma was interviewed by Joseph III, recalling many vital details about the early Church but also denying the practice of plural marriage.12 She died in Nauvoo on April 30, 1879, at the age of seventy-six.

There are several reasons Emma stayed in Nauvoo after Joseph Smith’s death, but a few in particular stand out. First, Emma had intense anxiety over the protection of Joseph’s and Hyrum’s bodies. In fear of threats that the bodies would be stolen or desecrated, coffins filled with sandbags were used in the public funeral of the two martyrs. Coffins containing the actual bodies of Joseph and Hyrum were temporarily buried in the basement of the unfinished Nauvoo House. A few months later under Emma’s direction, a small group of close friends moved the bodies to a secret burial spot near the home Joseph and Emma lived in during their time in Nauvoo. For reasons not known, Emma did not notify Mary Fielding Smith, Hyrum’s widow, that the bodies had been moved, further widening the rift between the two sisters-in-law. The graves were unmarked, though Emma showed the location to her grandson Frederick Alexander Smith.13

Emma remained near Joseph’s body for the rest of her life. Jenny Reeder has suggested that Emma may have interpreted the Lord’s command to “go with [Joseph] at the time of his going” (D&C 25:6; emphasis added) as a command to stay near to Joseph’s body.14 Understandably, Emma was later buried near the secret burial place of Joseph and Hyrum. In 1927 concerns over the rising waters of the Mississippi River led to all three bodies’ being reinterred next to the original Joseph Smith cabin on the bank of the Mississippi in Nauvoo.15

Another compelling reason for Emma’s staying in Nauvoo was her desire to take care of Lucy Mack Smith, her mother-in-law. At Brigham’s invitation, Lucy spoke at a general conference of the Church in October 1845 and expressed a desire to travel to the West but said that her health would not permit her to go.16 In poor health and crippled by arthritis, Lucy depended on the support of Emma and of her own daughters Katherine, Sophronia, and Lucy, who also remained in the area for the rest of their lives.17 Lucy later spoke tenderly of Emma’s care for her, noting that on one occasion “for five nights Emma never left me; but stood at my bedside all the night long.”18

Finally, Emma had endured terrible trials and saw Nauvoo as a safe haven for her family after Joseph’s death. On one occasion she wrote to Joseph III saying of Nauvoo, “It is my home, and my children’s home, and I shall not cease to pray that they all may live to enjoy it.”19 Emma was visited a number of times by members of the Church from Utah. During one such visit, she told her visitors, “You may think I was not a very good Saint not to go West but I had a home here and did not know what I should have done there.”20

When Emma died, she was surrounded by her family and friends. Her son Alexander heard her say, “Joseph, Joseph, Joseph.” He said that Emma then sat up in her bed, extended her left arm, and said, “Yes, I am coming,” before she collapsed back on her bed. Emma passed away on April 30, 1879.21

3.Some of these complicated legal disputes that persisted beyond the death of Joseph Smith are discussed in Gordon A. Madsen, Jeffrey N. Walker, and John W. Welch, eds., Sustaining the Law: Joseph Smith’s Legal Encounters (Provo, UT: BYU Studies, 2014).

14.See Reeder, First, 164. See also “Revelation, July 1830–C [D&C 25],” p. 34, online at josephsmithpapers.org. Emma indeed fulfilled all that she had been personally asked of the Lord to do in section 25 of the Doctrine and Covenants.

21.Reeder, First, 173. Closing an era, her death in Nauvoo came less than two years after Brigham Young’s death in Utah.

Thank you for confirming my thoughts that one of the reasons that Emma stayed in Nauvoo was probably because the Prophet's mother, Lucy, was not strong enough for the journey. I hope that none of us are ever critical of Emma for any reason. We cannot begin to really understand all that she endured. Perhaps, through her many great sacrifices and obedience, she had already secured her exaltation. Perhaps it was better for her to remain with Lucy and she was not required by the Lord to go to the Salt Lake Valley. Whatever the case, I believe she is still "An Elect Lady," as recorded in D&C 25:3, "Behold, thy sins are forgiven thee, and thou art an elect lady, whom I have called."

Joseph and Emma also baried 4 or 5 children in the Nauvoo area.