Why Did Alma See God Surrounded by Angels? | Meridian Magazine 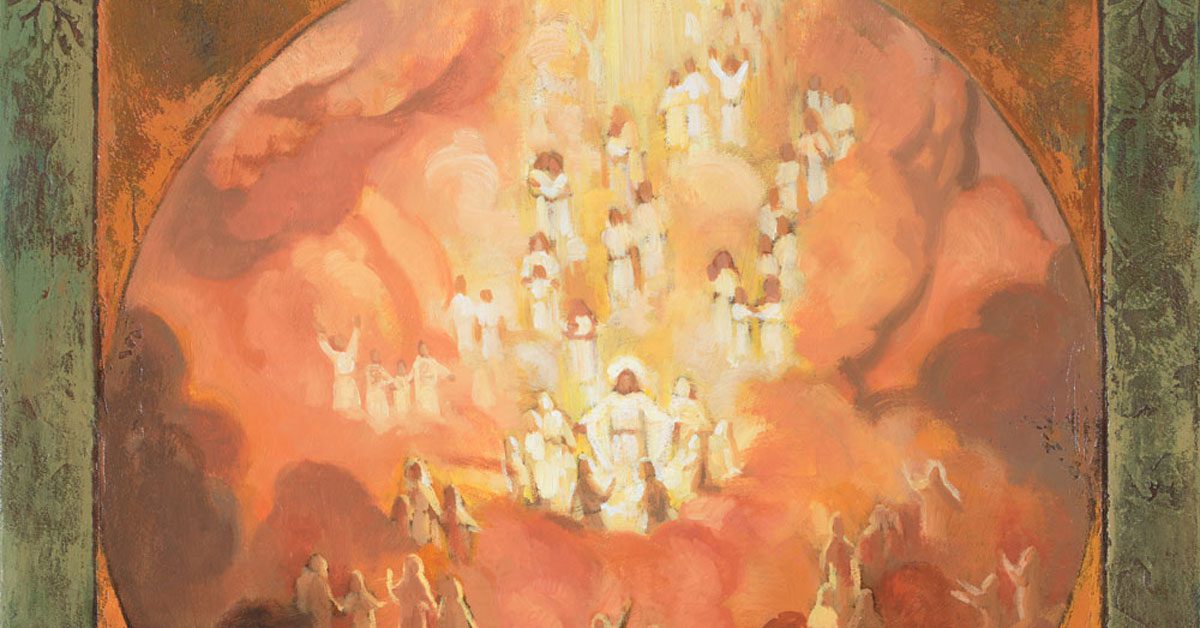 Why Did Alma See God Surrounded by Angels?

“Yea, methought I saw, even as our father Lehi saw, God sitting upon his throne, surrounded with numberless concourses of angels, in the attitude of singing and praising their God; yea, and my soul did long to be there.” Alma 36:22

The apex of Alma’s masterful chiastic account of his conversion relates how, while in the midst of the harrowing torment of his many sins, he remembered and called upon Jesus Christ, the Son of God, for mercy (Alma 36:17–18).1 From that moment, Alma’s soul was transformed from a previous state in which “the very thought” of being in God’s presence “rack[ed his] soul with inexpressible horror” (Alma 36:14) to a state in which he was worthy to see God on his throne, and even longed to be there with Him (Alma 36:22). Alma’s story is thus an inspiring example of the transformative power that repenting and turning to Christ can have on individual lives.

Yet scholars are increasingly recognizing that Alma’s story is about more than repentance. “If the chapter’s [Alma 36] intent was solely to teach repentance,” observed Kevin Tolley, “it might be better suited to his youngest son Corianton.”2 Paying careful attention to the details in both Alma 36 and Mosiah 27, Tolley notes that Alma’s conversion also follows the established pattern of ancient prophetic call narratives.3 In ancient Israel during Lehi and Nephi’s day, the typical prophetic call culminated in the prophet standing in the midst of God’s heavenly host, seeing and hearing the divine council’s deliberations and decrees (see Jeremiah 23:16–18).4

Thus, as has been valuably discussed over the past three decade, Nephi began his record by relating his father’s vision of God on his throne, surrounded by the heavenly host, thereby establishing his legitimacy as a prophet (1 Nephi 1:8–15).5 In Alma’s account to his son Helaman, he directly quoted twenty-one of Lehi’s words in the longest verbatim quote of one Book of Mormon author by another: “Yea, methought I saw, even as our father Lehi saw, God sitting upon his throne, surrounded with numberless concourses of angels, in the attitude of singing and praising their God” (Alma 36:22; cf. 1 Nephi 1:8).6

By citing Lehi’s prophetic call while relating his own experience, Alma indicated that he, too, was “given heavenly knowledge and was commissioned to preach a divine message” by the same pattern as Lehi and other ancient prophets.7 From that point on, Alma and the sons of Mosiah went about “publishing to all the people the things which they had heard and seen” (Mosiah 27:32)—a phrase typical of ancient Israelite prophetic call narratives.8

Mark Alan Wright has also noted that aspects of Alma’s experience correspond with ancient American patterns for becoming a prophet and a healer.9 Thus, Alma’s prophetic commission simultaneously conforms to the pattern of his ancient Israelite and Nephite forbearers and also to expectations likely held by his ancient American contemporaries.

Understanding Alma’s account as a prophetic call narrative, in addition to being a story of repentance and conversion, clarifies why he gave this account to his righteous and oldest son Helaman, instead of giving it to Corianton, his son most in need of a lesson on the power of repentance. As Tolley explained, “Considering the underlying message of a prophetic call, it would seem fitting that Alma relate the story to his eldest son, Helaman, the heir apparent to his prophetic office.”10 As the angel charged Alma to “seek no more to destroy the church of God” (Alma 36:11) and as Alma then went forth and “labored without ceasing” to “bring souls unto repentance” (Alma 36:24), Alma called and charged his son Helaman to “take care of these sacred things” and to “go unto this people and declare the word” (Alma 37:47).

In addition, these prophetic call narratives use typical words that confirm the majesty and authority through which these prophetic assignments come. They often speak of God’s glory, power, light, and voice, as well as the overwhelming sense of inadequacy of the prophet being called (see Isaiah 6:1–5). Thus, Alma employs in Alma 36 many of the same keywords—such as the terms angel, voice of thunder, arise and stand, born of God, mercy, marvelous light, remember, captivity, fathers, bondage, and delivered—that the angel had used while speaking to Alma at the time of his conversion and authoritative calling together with the four sons of king Mosiah (see Mosiah 27:16).11 Similar words were used, for similar purposes, by Isaiah and Lehi in declaring their overwhelming amazement at God’s great works, goodness, and mercy as a result of their appearances before the throne of God (see 1 Nephi 1:14).

Alma subsequently passed on tangible symbols of prophetic authority—the sacred records, the Liahona, and the Interpreters—to Helaman, in what was likely a ceremonial event (Alma 37).12 Alma transmitted these records to Helaman much as God had shown and entrusted the heavenly book to Lehi (1 Nephi 1:11). By recalling the beginning of Lehi’s throne theophany, Alma evoked the end of that story, that Lehi faithfully “went forth among the people, and began to prophesy and to declare the things which he had both seen and heard” (1 Nephi 1:18). Through these literary expressions and ceremonial transmittals, “Helaman is shown as Alma’s successor in the line of Nephite prophets.”13 The prophetic mantle was effectively transferred from Alma to Helaman, and this moment becomes, in all respects, Helaman’s prophetic call and commissioning.

6.See Tolley, “Alma 36,” 303. See also John W. Welch, “Textual Consistency,” in Reexploring the Book of Mormon: A Decade of New Research, ed. John W. Welch (Salt Lake City and Provo, UT: Deseret Book and FARMS, 1992), 21–22; Joseph M. Spencer, An Other Testament: On Typology, 2nd ed. (Provo, UT: Neal A. Maxwell Institute for Religious Scholarship, 2016), 9. Samuel the Lamanite’s quote in Helaman 14:12 of twenty-one words of the angel in King Benjamin’s speech in Mosiah 3:8, ties with Alma’s quote of Lehi as an equally long quote, when the word of is restored in Mosiah 3:8 as provided by Royal Skousen’s Critical Text of the Book of Mormon.

9.See Mark Alan Wright, “Nephite Daykeepers: Ritual Specialists in Mesoamerica and the Book of Mormon,” in Ancient Temple Worship: Proceedings of the Expound Symposium, 14 May 2011, ed. Matthew B. Brown et al. (Salt Lake City and Orem, UT: Eborn Books and Interpreter Foundation, 2014), 248–252; Mark Alan Wright, “‘According to Their Language, unto Their Understanding’: The Cultural Context of Hierophanies and Theophanies in Latter-day Saint Canon,” Studies in the Bible and Antiquity 3 (2011): 58–64. See also Neal Rappleye, “ ‘Put Away Childish Things’: Learn to Read the Book of Mormon with Mature Historical Understanding,” 2017 FairMormon Conference presentation, 32–33.