Why Did Alma Need to “Establish the Order of the Church” in Zarahemla Again? | Meridian Magazine 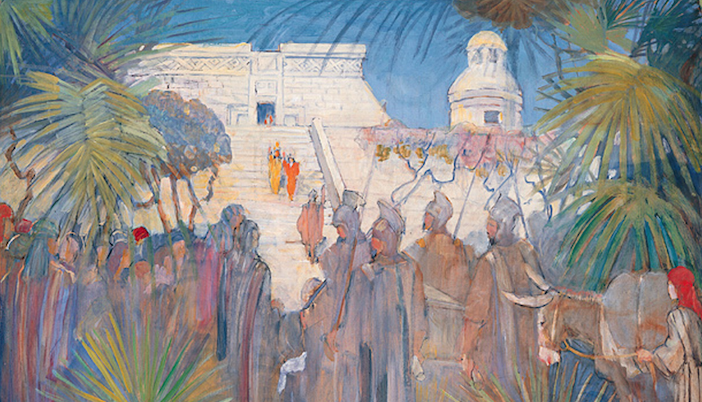 Why Did Alma Need to “Establish the Order of the Church” in Zarahemla Again?

“And thus they began to establish the order of the church in the city of Zarahemla.” (Alma 6:4)

Alma the Elder established his covenant community around 140 BC at the Waters of Mormon in the land of Nephi (Mosiah 18:17–18). When his group rejoined the Nephites in Zarahemla after 120 BC, King Mosiah “granted unto Alma that he might establish churches throughout all the land of Zaramehla; and gave him power to ordain priests and teachers over every church” (Mosiah 25:19). Soon “there were seven churches in the land of Zarahemla” (Mosiah 25:23).

By about 83 BC, however, Alma the Younger had to once again “establish the order of the church in the city of Zarahemla” (Alma 6:4). A careful review of the many events leading up to this time of reordering explains why the church had to be reconstituted in Zarahemla so soon—only about 35 years after its founding there.

Initially, “many of the rising generation” in the land of Zarahemla had forgotten or “could not understand the words of king Benjamin” and several of them would not be baptized (Mosiah 26:1, 4). Dissensions arose “among the brethren,” and some people, eventually including Alma the Younger and the sons of Mosiah, “deceived many with their flattering words” (Mosiah 26:6; 27:8). Some dissenters were excommunicated (Mosiah 26:36), and the unbelievers began persecuting members the church (Mosiah 27:1).

Alma the Elder took steps to “regulate all the affairs of the church” (Mosiah 26:37). King Mosiah issued a public proclamation prohibiting persecution of church members (Mosiah 27:2), and Alma required church members to esteem their neighbors as themselves (vv. 3–4). These measures were effective for a while, but undercurrents continued to swirl. A turning point came when Alma the Younger and the sons of Mosiah were stunned by an angel of the Lord (vv. 18–19). Being converted, they worked zealously among all of Mosiah’s people, trying “to repair all the injuries that they had done” (v. 35), but apparently not everyone was placated.

Amidst this stormy religious and political context, the sons of Mosiah slipped away for a fourteen-year missionary sojourn (Mosiah 28:9). Consequently, King Mosiah abdicated the kingship, a legal reform was adopted, and Alma the Younger, who was also the High Priest over the church, was installed as the first Chief Judge under the new legal regime (Mosiah 29:41). Also during this time, the Mulekites outnumbered the Nephites (Mosiah 25:5), thereby creating a significant political force.

Against this turbulent background, more serious troubles started with Nehor in the very first year of Alma’s reign (Alma 1:2). In conscious opposition to Alma, Nehor taught that all men would be saved without any intervention of an atonement, that the priests should be paid by the people, and he even “began to establish a church after the manner of his preaching” (vv. 3–6).

Even though Nehor was soon executed for enforcing priestcraft by the sword (Alma 1:12),[1] “this did not put an end to the spreading of priestcraft through the land.” In fact, it led to the persecution of “those that did belong to the church of God” (v. 16, 19, cf. vv. 19–20). That persecution then led to more apostasy (v. 24).

Although church leaders made diligent efforts to restore order within the Church (Alma 1:28), Nehor’s disruption was only just the beginning. Four years later, a Nehorite disciple named Amlici was “intent to destroy the church of God” (Alma 2:4). His rebellion led to vicious armed conflicts (Alma 2–3).[2] In the ensuing four years, the persecution against the church became so great that Alma felt compelled to give up the judgment seat to focus on the ministry (Alma 4:15–17).

At that point, Alma began by addressing the members of the church in Zarahemla (see Alma 5). In the wake of that very powerful speech, “he ordained priests and elders … to preside and watch over the church.” He received new converts and he excommunicated those who would not repent (Alma 6:1–3). In these ways, Alma the Younger “began establishing the order of the church in the city of Zarahemla” (v. 4).

These events during the early years of the reign of judges are reflective of many larger tensions going on within Zarahelma. Understanding these pressures is crucial because they shape and impact Nephite history for the next 100 years. Alma successfully drew upon his personal and professional awareness of both sides of these political, social, legal, military, and religious pressures, as he wisely led his people and strengthened the church “according to the order of God” (Alma 6:1).

At the same time, Nephite society as a whole also was undergoing major transitions. Not only was there the change from kings to judges,[3] but also a separation, to some degree, of church and state,[4] something that was uncommon in the ancient world. It was rare for a reason: it created societal strains that were difficult to manage within ancient worldviews. Stated simply, in archaic cultures, “there was no science separate from religion. All explanations of how the world worked were religious.”[5]

LDS anthropologist Brant A. Gardner saw the implications of this division at work here in Alma’s diverse and divided society: “Zarahemla housed two incompatible ways of viewing ‘reality,’ a conceptual split that was more divisive than two political parties. The tensions between these incompatible worldviews in Zarahemla … might be held in check for a while, but they begin to escalate over the next several years.”[6] Nehor, Amlici, and the waves of apostasy they created are manifestations of these difficulties.

The prophet Alma recognized all these problems and took action accordingly. “Alma [was] trying to heal this ideological separation by converting the entire population to” the Lord’s way.[7] Alma understood the best way to accomplish unity was through the gospel of Jesus Christ. So he gave everyone in his land an equal opportunity to be able “to hear the word of God” (Alma 6:5). Thus they each had “an equal chance throughout all the land…to answer for his own sins” (Mosiah 29:38).

While not everyone was converted, Alma and his priests and elders did have a measure of success, and “thus they began to establish the order of the church” again in Zarahemla (Alma 6:4). To enable this order as the Lord would have it, Alma commanded the faithful to “gather themselves together oft, and join in fasting and mighty prayer in behalf of the welfare of the souls of those who knew not God” (v. 6).

When carefully considered, valuable lessons for today can be found. First, while questions and struggles are the molecules of a stronger faith, antagonistic apostasy isn’t simply an individual matter, but affects whole communities. The Lord promised that the Nephites would prosper in the land only as they were faithful, as a people.[8] If a community, church, or country is not unified in their ideologies, rifts and conflicts in other areas are to be expected.

Another important lesson is that apostasy, whether individual or collective, does not happen in a vacuum. It is shaped and influenced by larger societal trends and cultural factors.[9] Identifying the factors influencing people to leave the Church or abandon the gospel is crucial in stemming the tides of apostasy and in kindly and spiritually leading people back into the way of the Lord.