Why Did Abinadi Warn the People of an East Wind? | Meridian Magazine 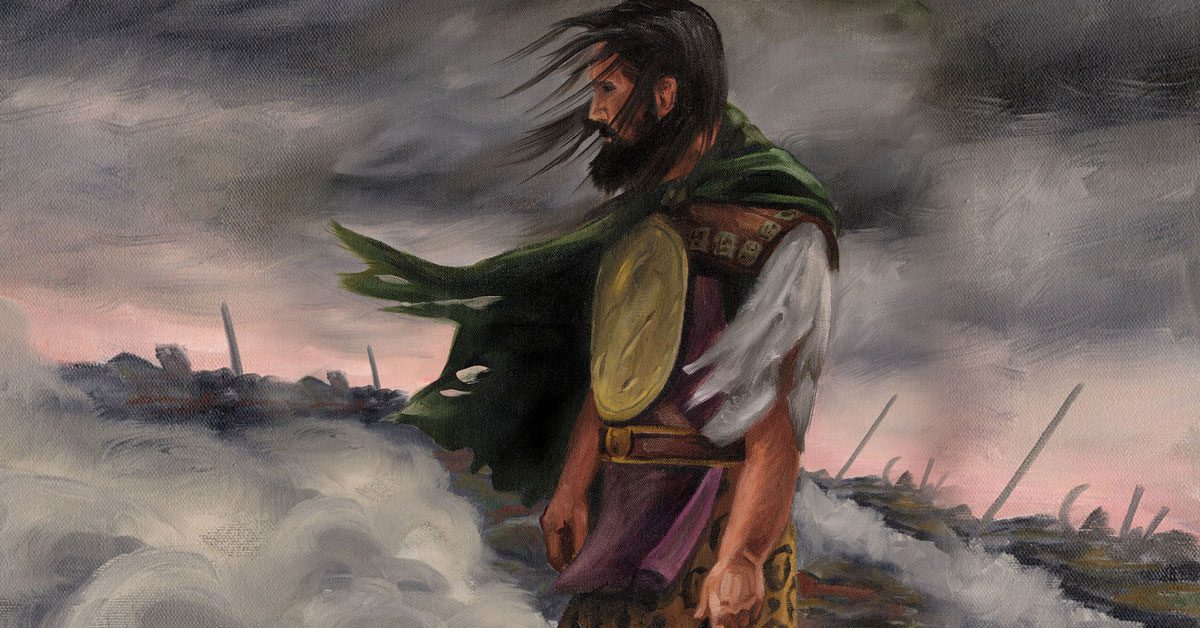 Why Did Abinadi Warn the People of an East Wind?

“And it shall come to pass that I will send forth hail among them, and it shall smite them; and they shall also be smitten with the east wind; and insects shall pester their land also, and devour their grain … and all this will I do because of their iniquities and abominations.” Mosiah 12:6–7

Two years after Abinadi’s first attempt to call the people of Noah to repent, he returned to the city of Nephi. Using a disguise until he was in the midst of the people, he once again tried to warn them of impending calamities if they did not repent (Mosiah 12:1).1 Abinadi foretold that the Lord would “send forth hail,” and would also smite them “with the east wind” and that “insects shall pester their land … and devour their grain” (Mosiah 12:6). Famine and pestilence would also be among the “sore afflictions” they would suffer from (Mosiah 12:4). This appears to be the same prophecy Limhi referred to when he told Ammon about a prophet who had come among Limhi’s people and warned that if they “shall sow filthiness they shall reap the east wind, which bringeth immediate destruction” (Mosiah 7:31).2

In an ancient biblical context, the “east wind” was sometimes called “the wind of the Lord” (see Hosea 13:15) because it was “viewed as an instrument of God’s judgment.”3 In Israel, the wind from the east (or southeast) originates from the Arabian Desert and is insufferably hot and dry, often bringing sand along that can darken the skies and irritate the skin and the eyes. According to Dennis M. Swanson, such winds are typically called the khamsin or sirocco today, and are “capable of reducing green crops to dry, brown husks in a single day” and can “also spawn wildfires.”4 Hence, the Book of Enoch says that from the east wind “proceeds extirpation, drought, pestilence, and destruction” (1 Enoch 76:6).5

Even though these climatic conditions were specific to the region of Israel, biblical writers used the “east wind” as a sign of divine judgment when talking about other regions of the ancient Near East as well. Hence, God sends a “vehement east wind” with the sun to bear heat down upon Jonah when he was outside of Nineveh (Jonah 4:8), but in reality, an east wind would typically bring refreshing rains in Assyria.6

Likewise, in Pharaoh’s dream that was interpreted by Joseph, it is an “east wind” that came and dried the crops, bringing seven years of famine (Genesis 41:6, 23, 27), and the plague of locusts is brought by an “east wind” (Exodus 10:13). Yet in Egypt, it is southern (or southeast) winds that bring both the dry, withering heat that kills crops, and locust infestations.7 “East wind” could thus be used to describe any hot, dry, devasting wind, regardless of which direction it came from.8

In ancient Mesoamerica, winds from all directions were viewed as “the quintessential evil force,”9 and could be “sent as a punishment from the gods for failing to make appropriate offerings or for engaging in impious behavior.”10 The east wind, however, could be particularly destructive. Kerry M. Hull explained, “for various indigenous groups in Mesoamerica, an east wind can have numerous negative associations: as a hot or dry wind in some areas; as a wind tied to malevolent forces and sprits; and as a highly destructive wind that brings floods (i.e., hurricanes).”11 For example, some Maya in the Yucatan regarded the “east wind” as hot, and among the Itzaj Maya the “summer east wind” was especially feared for causing fires to get out of control.12 In both Belize and Chiapas, Mexico, “an east wind can be a scorching, drying wind.”13

Thus, under the right climatic conditions, hail, east wind, and locusts—three things linked together in Abinadi’s prophecy (Mosiah 12:6)—could form a deadly combination in southern Guatemala, devastating crops and causing a famine.18 Given the destructive force of such a combination, it’s no wonder the Tzeltal Maya, of Chiapas, Mexico, specifically pray, “let no hail come; let no wind come; let no locust come.”19

Abinadi stood firmly within Old Testament prophetic tradition, likely accessed by the Lehites through the Plates of Brass, when he warned that the Lord’s judgment was coming like the “east wind” (Mosiah 7:31; 12:6). This threat was meaningful and real. In both the Old World and the New, the “east wind” (although not always from a strictly due “east” direction) was recognized as a destructive force that could devastate crops and bring famine, pestilence, and destruction. Under certain climatic conditions, it could cause hailstorms and bring swarms of insects (locusts), a deadly combination that led to further depletion of crops. Thus, Abinadi’s warning of hail, east wind, insects, famine and “immediate destruction” was no idle threat from the Lord.

Abinadi’s prophecy of a destructive east wind, along with hail and insects that would decimate their grain, was all the more ominous given the likely timing of his message. John W. Welch has persuasively argued that Abinadi’s trial happened close to the time of Pentecost.20 Pentecost came fifty days after the Passover, concluding the celebration of Israel’s escape from Egyptian bondage and the receiving of the Ten Commandments. It also coincided with the spring harvest, and was thus a time to celebrate the bounty of spring.21

In such a context, Abinadi’s message of an “east wind,” with hail and insects, all coming to destroy their crops and bring famine, couched in language reminiscent of the Egyptian plagues (cf. Exodus 10:13) would have been especially well timed to strike a stirring chord within the people. One can well imagine that, at this time, place, and cultural setting, a more serious warning could not have been given than the threat of an impending “east wind.”

Moreover, Abinadi’s threatening curse drew further strength from the symbolism of the easterly direction. In seeking omens or heavenly signs, ancient priests generally oriented themselves by facing the south.22 In facing the warmer south, the heaven-gazer thus had the east on his unfavorable left side and the auspicious west on his right. Metaphorically, being found on the left hand was thought to be problematic (see Mosiah 5:10, 12). Once again, Abinadi’s warning would have struck, not just a concern about bad weather, but much more the fear of God in the hearts of the people who heard him.

According to Limhi, Abinadi’s dire prediction was fulfilled, and the people were indeed “smitten and afflicted” (Mosiah 7:32). Hope, however, was not lost. Mark A. Wright noted that among the Maya, priests or ritual specialists “can cure individuals afflicted by evil winds.” In an even more powerful fashion, “those afflicted by the punishing winds spoken of by Abinadi could only be delivered by turning to their ultimate high priest, Jesus Christ.”23 Before long, Limhi’s people realized that they could only be delivered, “if [they would] turn to the Lord with full purpose of heart” (Mosiah 7:33). Soon they were actually delivered, as they desired to enter into the covenant of baptism and escaped back to the land of Zarahemla, where they were baptized (Mosiah 21:32–35; 22:13; 25:18).

2.For analysis of the relationships between Limhi’s statements and the words of Abinadi, see John Gee, “Limhi in the Library,” Journal of Book of Mormon Studies 1, no. 1 (1992): 61–64.

5.See E. Isaac, “1 (Ethiopic Apocalypse of) Enoch,” in The Old Testament Pseudepigrapha, 2 vols., ed. James H. Charlesworth (Peabody, MA: Hendricks Publishers, 1983), 55. A footnote indicates that some manuscripts read “death” or “heat” instead of “pestilence.” Cf. the translation cited by Hull, “East Wind,” 173–174, which reads “out of it [the easterly wind portal] comes destruction, dryness and heat and death.”

15.See Felix Webster McBryde, “Studies in Guatemalan Meteorology (I): The Climate of Southwest Guatemala,” Bulletin of American Meteorological Society 23, no. 6 (June 1942): 259–261; Felix Webster McBryde, “Studies in Guatemalan Meteorology (II): Two Weather Types in Southwest Guatemala,” Bulletin of American Meteorological Society 23, no. 10 (December 1942): 400, 402. McBryde documents the dry, hot, desiccating wind as coming from the north, but more frequently the northeast, and refers to it in Spanish as the norte wind. As noted by Hull, “East Wind,” 182–185, Maya directional systems differ significantly amongst each other and from traditional cardinal directions. East and west are the most consistent, and most important directions, while north and south are secondary. Most Mesoamerican directional systems divide the world into quadrants based on the sun’s axis on the summer and winter solstices, thus the “east” quadrant would encompass all directions ranging from northeast to southeast. See Brant A. Gardner, “From East to West: The Problem of Directions in the Book of Mormon,” Interpreter: A Journal of Mormon Scripture 3 (2013): 119–153. Thus, a predominately “northeast” wind would be an “east wind” to pre-Columbian Maya. Furthermore, as pointed out above, biblical references to an “east wind” could be used to refer to any hot, dry, desiccating wind, regardless of which direction it came from. If Abinadi’s usage of “east wind” is drawn from this biblical tradition (from the plates of brass), then the effects of the wind may be more relevant than its directionality (cf. Wright, “Nephite Daykeepers,” 256 n. 14).

It seems the most famous of winds are those that drove Paul’s Gemini ship to the west has been left Out: Euroclydon A north wind frequently experienced in the eastern Mediterranean, accompanied by terrific gusts and squalls. In the storm mentioned (Acts 27:14), it probably blew from the northeast or east-northeast