Why Did Abinadi Use a Disguise? | Meridian Magazine 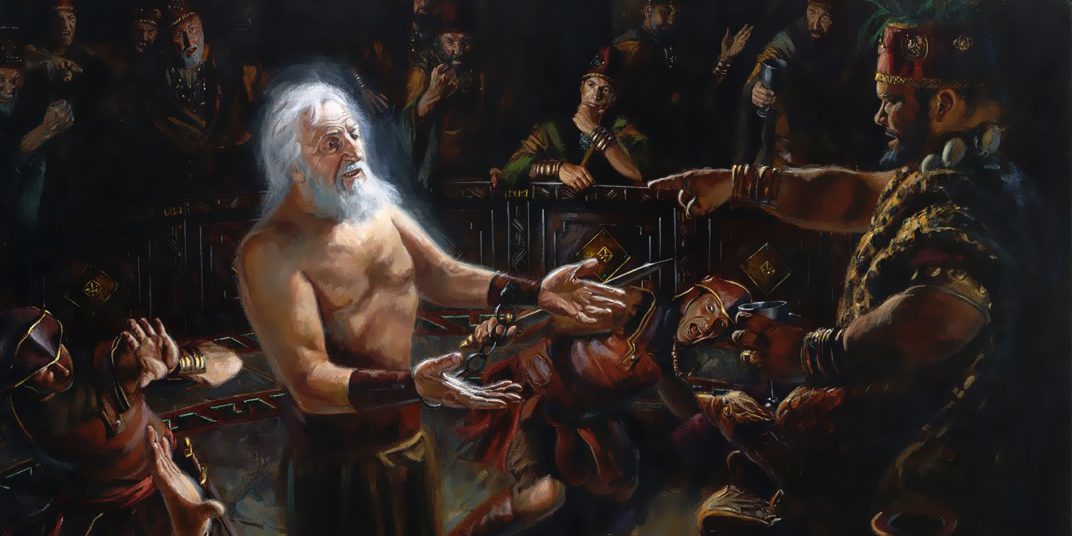 Why Did Abinadi Use a Disguise?

“And it came to pass that after the space of two years that Abinadi came among them in disguise, that they knew him not, and began to prophesy among them.”
Mosiah 12:1

When Abinadi first preached repentance unto the people of King Noah, they were “wroth with him, and sought to take away his life” (Mosiah 11:26). After hearing reports of Abinadi’s prophecies, King Noah also sought to slay Abinadi, but the “Lord delivered him out of their hands” (v. 26). Two years later, Abinadi again preached unto the people, but this time he “came among them in disguise, that they knew him not” (Mosiah 12:1). Angered by Abinadi’s prophecies of impending captivity, afflictions, and destruction, the people bound and carried him before King Noah for judgment (vv.1–9).

Some have found Abinadi’s use of a disguise rather puzzling, seeing that he sought to conceal his identity while at the same time openly preaching among the people.[1] It’s possible that the disguise was merely used to gain entrance to the city, and that after he was among the people it was no longer needed.[2] Yet when this story is compared to biblical stories which also deal with prophetic messengers, kings, and disguises,[3] it seems that there is likely more to Abinadi’s disguise than initially meets the eye.

Biblical scholar Richard Coggins has explained that in these types of biblical narratives, “one of the parties disguises himself (or in one case herself), but the disguise is penetrated, and God’s will is conveyed in a form which is liable to be quite unacceptable to the one seeking it.”[4] Coggins also argued that the appearance of prophetic disguises in several Old Testament stories, all from the same historical period, is “surely not simply a matter of coincidence.” Rather, with the use of a prophetic disguise, “a theological point is being made.”[5]

These stories typically depict a contest or conflict between God and an earthly king. As Alan Goff has noted, “All of the kings or their heirs in the biblical disguise stories meet with brutal deaths, and in each case the dynasty fails.”[6] The same outcome befell King Noah, who was burned to death by his own people and whose dynasty ended after the reign of his son (Mosiah 19:20).

As for the disguise itself, it’s notable that right before it is mentioned in the text, the narrator reported that the “eyes of the people were blinded” (Mosiah 11:29).[7] This suggests that the disguise typifies the inability of wicked people to discern between truth and error.[8] King Noah himself arrogantly asked, “Who is Abinadi, that I and my people should be judged of him, or who is the Lord, that shall bring upon my people such great affliction?” (Mosiah 11:27). Although Noah’s question was surely meant to be rhetorical, it ironically demonstrates his personal lack of spiritual perception. He could discern neither the Lord nor his prophetic servant.

Interestingly, Noah’s statement is hauntingly similar to Pharaoh’s challenge to Moses: “Who is the Lord, that I should obey his voice to let Israel go?” (Exodus 5:2).[9] There are other important connections to Moses as well. It was Moses who revealed the Ten Commandments to Israel, and Abinadi severely rebuked King Noah and his priests for neither teaching nor keeping these commandments (Mosiah 13:11–26).[10] When Moses returned from the presence of the Lord, “the skin of his face shone; and [the people] were afraid to come nigh him” (Exodus 34:30). For this reason, Moses “put a veil on his face” when speaking with the Israelites (v. 33).[11]

The symbolism of the veil—and its connection to a disguise—may be especially significant. It’s possible that King Noah and his people didn’t initially identify Abinadi as the man who had previously preached among them. Even after the people apprehended Abinadi, they repeatedly referred to him as “a man” or “this man” or, in the words of King Noah, as a “fellow” who was “mad.”[12] The record never once mentions that they recognized him.

Their eyes were surely opened, though, when Abinadi’s disguise (whatever its physical nature) was symbolically unveiled and “his face shone with exceeding luster, even as Moses’ did while in the mount of Sinai” (Mosiah 13:5). Whether or not they had already identified him as Abinadi the preacher, there would have been no question at this point that they were dealing with Abinadi the prophet. The people “durst not lay their hands on him,” and King Noah himself was so disturbed that he “was about to release him, for he feared his word” (Mosiah 17:11). Tragically, Noah’s priests persuaded him to knowingly execute a true prophet of God, and in the process, seal his own terrible fate.[13]

Centuries earlier, Isaiah prophesied that the Lord had poured out a “spirit of deep sleep, and hath closed your eyes: the prophets and your rulers, the seers hath he covered” (Isaiah 29:10). By using a disguise to literally cover or obscure his identity, Abinadi symbolically demonstrated the spiritual blindness of the people—especially their inability to recognize a true prophet.[14] They may have outwardly accepted Moses and the laws that he revealed, but as Abinadi declared, “I perceive that they are not written in your hearts” (Mosiah 13:11). When it came to the things of God, they were spiritually asleep.

Taylor Halverson remarked, “For the priests of Noah who held Moses in the highest esteem, it is incredible that they were impervious to a prophet who came in the name of Lord with a face that did shine like unto Moses. If they truly followed Moses, why weren’t they willing to follow a prophet who looked like and taught like Moses?”[15]

In some ways, Abinadi’s disguise may also be symbolic of Jesus Christ and His earthly ministry.[16] To King Noah and his priests, Abinadi quoted prophecies that the Messiah Himself would be unrecognizable to His people because He would appear as an ordinary man. He would have “no form nor comeliness” or “beauty that we should desire him” (Mosiah 14:2; cf. Isaiah 53:2). Instead, he would be “despised” because the people “esteemed him not” (v. 3).[17] As recorded in the gospel of John, Jesus Christ “was in the world, and the world was made by him, and the world knew him not” (John 1:10, emphasis added). Similarly, Abinadi “came among [the people] in disguise, that they knew him not” (Mosiah 12:1, emphasis added).

Hugh Nibley explained, “God had visited the earth in remote times; he had spoken to Abraham and to Moses. … But to ask men to believe that that same God had spoken in their own day, and to a plain man who walked their streets—that was simply too much to take! … It was a test that few have ever passed: the humiliating test of recognizing a true prophet and taking instruction from the weak and humble things of the earth.”[18]

The world today is undergoing this same test. True prophets and apostles are among the people, and yet they mostly remain “hid from the world” (Doctrine and Covenants 86:9).[19] As in times past, modern prophets may look like ordinary men and talk like ordinary men, but their prophetic keys and inspired teachings transcend mortal wisdom and authority.[20]

Among all of King Noah’s priests, Alma alone “believed the words which Abinadi had spoken” (Mosiah 17:20), and through him the church of God was established among the Nephites (Mosiah 18:17–18). Those who similarly awaken themselves to the influence of the Holy Ghost will discern the voice of the True Shepherd speaking through His modern prophets and apostles (see John 10:27).[21] And like Alma, those who recognize these true messengers for who they really are must sometimes “dare to stand alone” in defense of their teachings.[22]

Taylor Halverson, “Mosiah 12–16. Martyr in Disguise,” The Interpreter Foundation, May 11, 2016, online at mormoninterpreter.com.

[2] The story of Samuel preaching from the city wall is another example where a prophet had to find an unusual way to gain access to the people in order to preach his message (see Helaman 13:2–4).

[7] For an analysis of the source documents and narrative layers of this story, see John W. Welch, The Legal Cases in the Book of Mormon (Provo, UT: BYU Press and the Neal A. Maxwell Institute for Religious Scholarship, 2008), 140–145.

[8] See Goff, “Abinadi’s Disguise and the Fate of King Noah,” 2 for further discussion of symbolic blindness.

[9] Goff, “Uncritical Theory and Thin Description,” 193 made this connection, noting that “Abinadi’s vocabulary doesn’t invoke just the prophet-king confrontations from the Deuteronomistic history but also that between Moses and Pharaoh.”

[11] For more on the use of veils in the Bible and the ancient Near East, see Stephen D. Ricks and Shirley S. Ricks, “‘With Her Gauzy Veil before Her Face’: The Veiling of Women in Antiquity,” in Bountiful Harvest: Essays in Honor of S. Kent Brown, ed. Andrew S. Skinner, D. Morgan Davis, Carl W. Griffin (Provo, UT: Neal A. Maxwell Institute for Religious Scholarship, 2011), 347–352.

[14] Although the specific details of Abinadi’s disguise are absent from this narrative, it’s possible that he used ashes to cover his face. In the Old Testament, ashes were often connected with mourning or destruction (see Jeremiah 6:26; 25:34), and using ashes to obscure identity was a method of disguise used by a prophet in 1 Kings 20:38–41. Considering that Abinadi was prophesying of impending calamities and destruction, it would be symbolically appropriate for him to have used ashes as part of his own disguise.

[16] Jesus was the great Jehovah of the Old Testament, the “God of Israel, and the God of the whole earth” (3 Nephi 11:14), and yet He condescended to dwell among men in a tabernacle of flesh (Doctrine and Covenants 93:4). In a sense, then, his mortal body itself can be seen as a disguise or covering for His divine nature.

[20] See David A. Bednar, “‘Chosen to Bear Testimony of My Name,’” Ensign, November 2015, 129, online at lds.org: “These ordinary men have undergone a most extraordinary developmental process that has sharpened their vision, informed their insight, engendered love for people from all nations and circumstances, and affirmed the reality of the Restoration.” See also, Boyd K. Packer, “The Mantle Is Far, Far Greater Than the Intellect,” BYU Studies 21, no. 3 (1981): 1–18.

[21] For the imperative to awaken oneself to the glorious truths of the Restoration, see Dieter F. Uchtdorf, “Are You Sleeping through the Restoration?” Ensign, May 2014, 59, online at lds.org.