Where is the Location of the Hill Cumorah? | Meridian Magazine 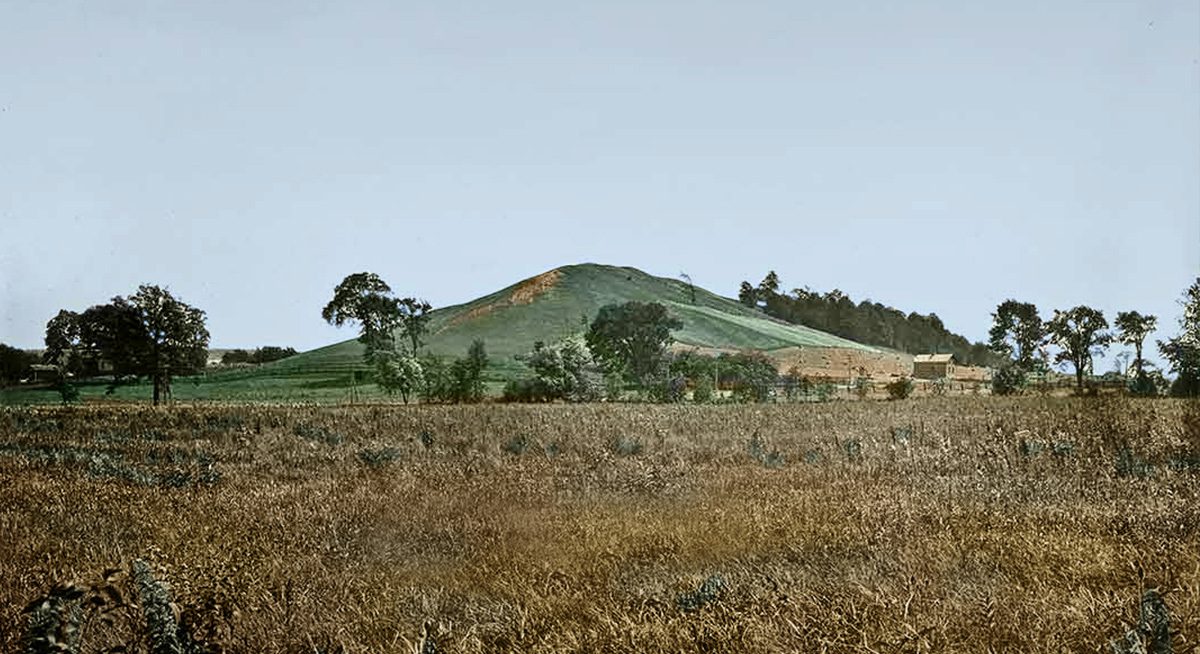 Where is the Location of the Hill Cumorah?

“Therefore I made this record out of the plates of Nephi, and hid up in the hill Cumorah all the records which had been entrusted to me by the hand of the Lord, save it were these few plates which I gave unto my son Moroni.” Mormon 6:6

The extinction of the Nephites occurred about A.D. 385 at “the land of Cumorah, by a hill which was called Cumorah” (Mormon 6:2, 5). This same hill was known centuries earlier by the Jaredites as Ramah (Ether 15:11). Knowing that he and his people faced impending doom, Mormon “made this record out of the plates of Nephi, and hid up in the hill Cumorah all the records which had been entrusted to me by the hand of the Lord, save it were these few plates which I gave unto my son Moroni” (Mormon 6:6). That is to say, Mormon deposited what remained of Nephite textual sources in the hill Cumorah for preservation and entrusted the plates of what would later become the published Book of Mormon (the record obtained by Joseph Smith in the nineteenth century) to his son Moroni, who finished and later sealed the record.

Not much is known about the land and hill Cumorah. The only Book of Mormon authors to discuss the location were Mormon and Moroni. Based on a statement given by Mormon, the land of Cumorah was “a land of many waters, rivers, and fountains” (Mormon 6:4). Other geographical clues given in the Book of Mormon appear to situate Cumorah north of the narrow neck of land and near an eastern seacoast (cf. Mormon 2:3, 20, 29; Ether 9:3).1 The hill itself was tall enough that it could be used as a strategic defensive position as well as an observation point for surveillance of the surrounding countryside (Mormon 6:2, 7, 11).

There is “no historical evidence that Moroni called the hill ‘Cumorah’ in 1823” during his first encounter with the Prophet Joseph Smith. The name Cumorah came into “common circulation [amongst Latter-day Saints] no earlier than the mid-1830s.”2 The first documented person to identify the drumlin hill3 in Manchester, New York where Joseph Smith received the plates with the hill Cumorah appears to have been William W. Phelps in 1833.4 Phelps’s identification was later followed by Oliver Cowdery in 1835.5Probably due to the popularity and influence of these two early leaders’ writings, the identification of the hill in New York as the same hill Cumorah mentioned by Mormon in Book of Mormon became commonplace amongst early Latter-day Saints.6

As far as can be determined, the Prophet Joseph Smith himself only associated the hill in New York with the Cumorah in the Book of Mormon towards the end of his life. In an 1842 epistle the Prophet spoke of hearing “Glad tidings from Cumorah! Moroni, an angel from heaven, declaring the fulfilment of the prophets—the book to be revealed” (Doctrine and Covenants 128:20).7 Before then, Joseph left the name of the New York hill where Moroni gave him the plates unnamed in his accounts of the coming forth of the Book of Mormon.8 Whether the Prophet arrived at this conclusion about the location of Cumorah by revelation, by conforming to usage that had become common among the early members of the Church about Book of Mormon geography, or in some other way is historically unknown.9

In the decades after Joseph Smith’s death, other prominent early Latter-day Saints, including Lucy Mack Smith,10 Parley P. Pratt,11 and David Whitmer,12 recounted earlier incidents in which the New York hill was identified as Cumorah by the angel Moroni and by Joseph Smith. Since these statements are somewhat late recollections, coming after the identity of Cumorah as a hill near Palmyra, New York, had become widespread, they should be used cautiously.13 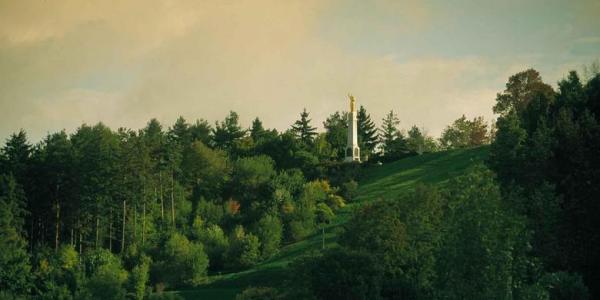 The Hill Cumorah with Angel Moroni monument, via history.lds.org.

Similarly, second and thirdhand sources from after Joseph Smith’s lifetime speak of a hidden cave within the New York drumlin which supposedly contains an abundance of surviving Nephite records (presumably Mormon’s repository described in Mormon 6:6).14 As described by these sources, Joseph and Oliver are said to have entered the cave and beheld this repository after finishing the translation of the Book of Mormon. However, these sources are based on hearsay, and are somewhat ambiguous as to whether Joseph and Oliver’s purported experience was literal or they were taken there in a vision.15 As with other late or second-hand reminiscences describing any hill as Cumorah, these accounts should likewise be viewed cautiously.

The identification of the Hill Cumorah in New York as being the same hill where the Nephites perished has remained commonplace amongst members and leaders of The Church of Jesus Christ of Latter-day Saints.16 However, most Church leaders have simply and accurately said that the geography of the Book of Mormon is not revealed.17 Additionally, several Latter-day Saint scholars have questioned whether the hill in New York could feasibly be the hill Cumorah described in the Book of Mormon.

Due to inconsistencies between the location of the hill described in the Book of Mormon and the real-world topography of western New York, as well as the lack of any archaeological evidence for the violent, mass destruction of hundreds of thousands of people in one concentrated location in that area through sustained warfare (cf. Mormon 6:10­–15), some have suggested that the location of the final battle took place somewhere other than the New York hill, such as in modern day Mexico just northwest of the isthmus of Tehuantepec.18 Because Moroni had to flee for his life, getting away from the area of the final battle and wandering wherever he could “for the safety of [his] own soul” (Moroni 1:1–3), and because he did not bury the plates until A. D. 421 (Moroni 10:1), which was 36 years after the final battle at the Nephite hill (Mormon 6:5), one could expect that thousands of miles might lie between that battle site and the final repository of the plates.

“Those who assume that the final Book of Mormon events took place in what is now the northeastern United States believe that the hill in upstate New York is the only hill called Cumorah,” wrote one historian summarizing the issue. “Others conclude there must be two hills called Cumorah: one in Central America, where they believe the final battles of the Book of Mormon took place; and the other in New York, where Moroni ultimately buried the gold plates he later delivered to Joseph Smith.”19 The Church itself has no official position on this matter, leaving individual Latter-day Saints to decide for themselves which theory they prefer to follow.20 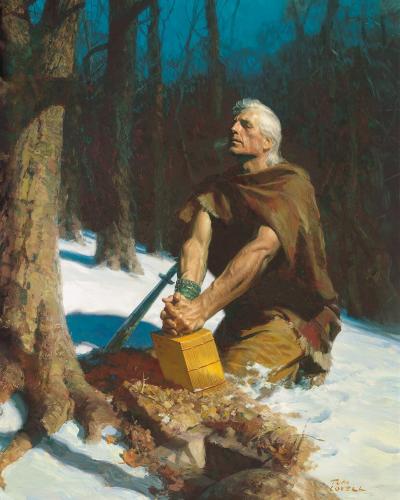 The location of where Joseph Smith obtained the golden plates which he translated by the gift and power of God is well known.21 Whether that was the same location as the final destruction of the Nephites remains open to discussion. Elder John A. Widtsoe of the Quorum of the Twelve Apostles recognized this when he wrote in 1950 that “the hill from which the Book of Mormon plates were obtained is definitely known. In the days of the Prophet this hill was known among the people as Cumorah. This is a fixed point in Book of Mormon later history. There is a controversy, however, about the Hill Cumorah–––not about the location where the Book of Mormon plates were found, but whether it is the hill under that name near which Nephite events took place.”22 Elder Widstoe further explained that, “As far as can be learned, Joseph Smith, translator of the book, did not say where, on the American continent, Book of Mormon activities occurred.”23

Much more important than precisely where the Book of Mormon hill Cumorah may be located is what transpired at a “hill of considerable size” near the town of Manchester, New York in the early morning hours of September 22, 1827 (Joseph Smith–––History 1:51–59). President Thomas S. Monson testified of “the momentous events that unfolded” on that occasion:

A plowboy prophet took a horse and wagon and, in the dark of night, rode to this hill, where he received an ancient record from the angel Moroni. In a remarkably short time, this untutored young man translated a record detailing 1,000 years of history and then prepared the Book of Mormon for public distribution. . . . The visitor often comes [to the Hill Cumorah] with an attitude of curiosity. He or she departs with a soul touched by the Spirit of the Lord. . . . I bear an apostolic witness that Jesus is the Savior of the world and that He and His Father appeared to the Prophet Joseph Smith to usher in this dispensation of the fulness of times.24

Since the Book of Mormon presents itself as a historical text, it is appropriate to ask and remain open to questions about its ancient geographical and historical setting. “Out of diligent, prayerful study, we may be led to a better understanding of times and places in the history of the people who move across the pages of the divinely given Book of Mormon,” Elder Widtsoe allowed.25 However those facts may appear to any individual, all readers of the Book of Mormon should focus on its witness of Jesus Christ and the eternal truths it teaches, which is indisputably its primary purpose.

Journal of Book of Mormon Studies 13, no. 1–2 (2004). [This entire issue of the journal is dedicated to topics surrounding the Hill Cumorah.]

Thank you for an excellent article. To me, it doesn't make sense that Moroni, who was fleeing for his life, would return to the battleground where all his compatriots were killed to bury the plates. To the contrary, he says clearly that he was wandering for the safety of his life. And there is a revelation that confirms this statement he made and suggests that he wandered quite a distance. When he designated the location of the Manti Temple, Brigham Young declared that he had a revelation that Moroni himself had dedicated that spot for a temple. One possible explanation for that would be that Moroni was fleeing Central America, which the archeological evidence suggests is the setting for the Book of Mormon, and traveling to the place the Lord told him the plates should be buried so that Joseph Smith could find them. I would also add that Joseph Smith's statement in the D&C, "glad tidings from Cumorah," makes no suggestion as to where Cumorah is, so that is of no help in pinning down the location. As the article states, there is no scriptural association between the hill in New York where the plates were buried and the name "Cumorah." So we are left to speculate.

I also believe it is not important where the Hill Cumorah is located. The Book of Mormon is true as is the Restored Gospel. However, at this time there are is no physical evidence of a huge battle having taken place in or near the hill Cumorah. The ancients practiced battles of extermination, not for victory alone, but the entire destruction of their enemies. Even if the physical remains of the inhabitants had completely vanished, their stone and/or metal weapons and household items would have been discovered a mere 1600 years after the battle! There are many references to two Cumorahs in historical church writings. It is more important that we read and live by the teachings in the Book of Mormon than being concerned about where the hill is or was. We can enjoy learning more about the location another time. Glad it is under discussion and looking forward to more information in the future