Where did the Brother of Jared Get the Idea of Shining Stones? | Meridian Magazine 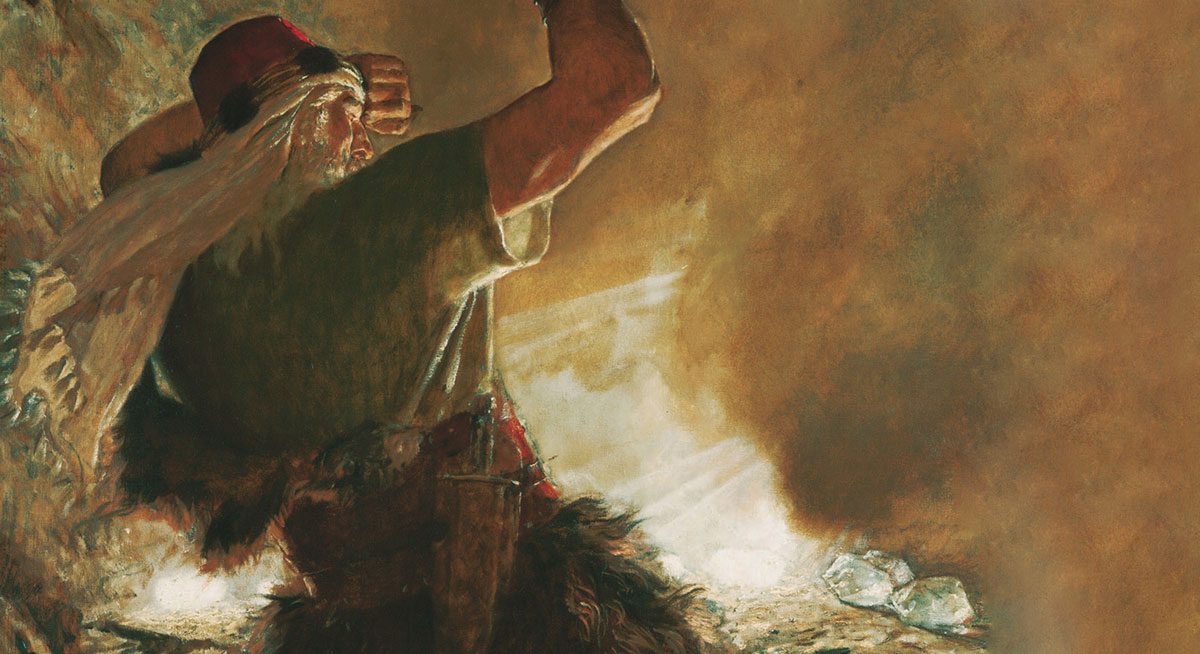 Where did the Brother of Jared Get the Idea of Shining Stones?

“And thus the Lord caused stones to shine in darkness, to give light unto men, women, and children, that they might not cross the great waters in darkness.”

When the brother of Jared expressed his concern about the lack of light in the barges which the Lord had instructed his people to build, the Lord responded, “What will ye that I should do that ye may have light in your vessels?” (Ether 2:23). In response to this invitation, the brother of Jared “did molten out of a rock sixteen small stones; and they were white and clear, even as transparent glass” (Ether 3:1).[1]

Hugh Nibley asked, “But who gave the brother of Jared the idea about stones in the first place? It was not the Lord, who left him entirely on his own; and yet the man went right to work as if he knew exactly what he was doing. Who put him on to it?”[3]

While stones that emit light may seem like an absurdity to some modern readers, legends of their existence and importance were widely spread throughout the ancient world.[4] Drawing upon a substantial body of ancient texts, John A. Tvedtnes has connected the shining stones in Ether to such items as the Urim and Thummim, glowing idols, teraphim, sanctuary stones, and medieval glowing stones.[5] Tvedtnes concluded, “The account of the stones used to provide light in the Jaredite barges fits rather well into a larger corpus of ancient and medieval literature.”[6]

Of particular relevance is the way that shining stones were directly linked to Noah’s ark. In the Bablyonian Talmud, for example, one Jewish commentator reported that the Lord instructed Noah to “Set therein precious stones and jewels, so that they may give thee light, bright as the noon.”[7] Another ancient Jewish rabbi explained, “During the whole twelve months that Noah was in the Ark he did not require the light of the sun by day or the light of the moon by night, but he had a polished gem which he hung up.”[8]

These Jewish explanations are notable when considering that the text in Ether 6:7 explicitly draws a parallel between the Jaredite vessels and Noah’s ark: “there was no water that could hurt them, their vessels being tight like unto a dish, and also they were tight like unto the ark of Noah” (emphasis added).[9]

Considering that his people were already constructing barges after the manner of Noah’s ark, it is possible that the brother of Jared knew something of the stones which illuminated Noah’s vessel when thinking of a potential source of light for the barges of his own people.[10] Nibley thus argued that the brother of Jared was simply “following the pattern of Noah’s ark, for in the oldest records of the human race the ark seems to have been illuminated by just such shining stones.”[11]

An awareness of the ancient sources which discuss the shining stones and Noah’s ark may offer additional insights about the story of the brother of Jared. For instance, rather than just drawing upon the boundless limits of his own creative imagination, the brother of Jared may have been intentionally demonstrating his faith in the miraculous deliverance of Noah and his family—including the precious stones that, according to a variety of ancient sources, granted them light amidst the deluge. As the brother of Jared likened the sacred story of Noah’s salvation to his own people, he thought of a similar solution to his own vexing problem.[12]

In several ways, this story also helps demonstrate the pattern of the Lord’s interaction with his children. In some cases, God will freely grant His children blessings or solutions, simply because they have the faith to ask (see Ether 2:19–21). In other situations the Lord requires initiative, creativity, and diligent striving on the part of those seeking blessings or solutions. Elder Jeffrey R. Holland taught, “Clearly the brother of Jared was being tested. The Lord had done His part—miraculously, profoundly, ingeniously. Unique, resolutely seaworthy ships for crossing the ocean had been provided. … Now He wanted to know what the brother of Jared would do about incidentals.”[13]

The story about these stones is also deeply layered with rich symbolism. M. Catherine Thomas, for example, has suggested that the stones “evoke the Urim and Thummim” as well as the “white stone mentioned in Revelation 2:17.”[14] Thomas R. Valletta has noted that like the Liahona, the stones “typologically led the Jaredites to the promised land by the power of Christ.”[15] Robert E. Clark saw the transparent stones—initially devoid of light—as a reflection of the brother of Jared’s “own limitations, his own emptiness” that needed to be “filled with light.”[16] Thomas, likewise, viewed them as supplying “not only practical light, but spiritual light as well.”[17]

With these interpretations in mind, it is noteworthy that the stones only received their light after the Lord touched them “one by one with his finger” (Ether 3:6). In this sense, it can be understood that the light which provides revelation, which reveals one’s true identity, which acts as a constant guide through darkness and danger, and which fills the emptiness of the mortal heart with true joy and divine purpose can only be activated through personal contact with Jesus Christ.[18] Ultimately, the brother of Jared believed that stones could shine with light because he had faith in Jesus Christ—the true “light and life of the world” (3 Nephi 11:11).

Hugh Nibley, Lehi in the Desert/The World of the Jaredites/There Were Jaredites, The Collected Works of Hugh Nibley, Volume 5 (Salt Lake City and Provo, UT: Deseret Book and FARMS, 1988) 358–379.

[1] For a discussion of the ancient transparent stones formed through intensive heat, see Hugh Nibley, Lehi in the Desert/The World of the Jaredites/There Were Jaredites, The Collected Works of Hugh Nibley, Volume 5 (Salt Lake City and Provo, UT: Deseret Book and FARMS, 1988) 370–371. For analysis of the term “molten,” see Royal Skousen, Analysis of Textual Variants of the Book of Mormon: Part 6, 3 Nephi 19–Moroni 10 (Provo, UT: FARMS, 2006), 3754. For a discussion of glass in the ancient world, see Nibley, The World of the Jaredites, 216–218.

[4] For a treatment of criticisms regarding the shining stones in the Jaredite barges, see Nibley, An Approach to the Book of Mormon, 273–274. For the scientific plausibility of shining stones, see Nicholas Read, Jae R. Ballif, John W. Welch, Bill Evenson, Kathleen Reynolds Gee, and Matthew Roper, “New Light on the Shining Stones of the Jaredites,” in Pressing Forward with the Book of Mormon: The FARMS Updates of the 1990s, ed. John W. Welch and Melvin J. Thorne (Provo, UT: FARMS, 1999), 253–255.

[6] Tvedtnes, “Glowing Stones,” 122–123. See also, Nibley, An Approach to the Book of Mormon, 290–291: “The few sources that might have been available to the prophet were obscure and garbled accounts in texts that not half a dozen men in the world could read, eked out by classical sources that were entirely meaningless until the discovery of the key—the great Gilgamesh Epic—long after the appearance of the Book of Mormon. That key ties the pyrophilus stone, the Alexander Cycle, the Syrian rites, the Babylonian Flood stories and the Urim and Thummim together in a common tradition of immense antiquity and makes the story of the Jaredite stones not only plausible but actually typical.”

[9] Hugh Nibley explained, “The description of the ships suggests nothing in the Bible, where aside from its general dimensions (which are symbolic) nothing is said as to how the ark actually looked; but it exactly matches the description of those sacred magur boats in which, according to the oldest Babylonian stories, the hero of the Flood was saved from destruction.” See Hugh Nibley, Since Cumorah, The Collected Works of Hugh Nibley, Volume 7 (Salt Lake City and Provo, UT: Deseret Book and FARMS, 1988), 209–210. Since Cumorah originally ran as a series in the Improvement Era from 1964–1967. For parallels between the Jaredite barges and the ship in the Babylonian flood story, see Nibley, An Approach to the Book of Mormon, 276–281.

[10] The story of Noah and the flood would have been relatively recent history for the Jaredites, who had departed from the, “great tower, at the time the Lord confounded the language of the people” (Ether 1:33). For information concerning the historicity of the tower of Babel, see Michael R. Ash, “Challenging Issues, Keeping the Faith: Is the Tower of Babel Historical or Mythological?” Deseret News, September 27, 2010, accessed October 28, 2016 at deseretnews.com: “When we shine the light of science and scholarship on the Tower of Babel, we find some interesting things. First, the word ‘Babel’ comes from an Assyro-Babylonian word that means ‘Gate of God’ and is related to a Hebrew word that means ‘confusion.’ It appears that the author(s) of the Babel account are engaging in some word-play to make a particular point about the story. It’s also interesting to note that the book of Ether never mentions ‘Babel’ but simply the ‘great tower.’” For an extensive treatment of the Tower of Babel, see Jeffrey M. Bradshaw and David J. Larsen, In God’s Image and Likeness 2: Enoch, Noah, and the Tower of Babel (Salt Lake City, UT: Eborn Books and The Interpreter Foundation, 2014), 379–434.

[18] The description of Christ touching the stones “one by one” and filling them with light is symbolic of his pattern of personal ministry. See Book of Mormon Central, “Why Did Jesus Minister to the People One by One? (3 Nephi 17:21),” KnoWhy 209 (October 14, 2016).

I used to use this discussion on my mission as an example of using the scriptures to guide us. The Lord will answer prayers, but He often waits for us to use or find the answers that He has already given us. In the LDS version of the bible, the footnotes remark that the "windows" built into the ark by Noah may have been shining stones. I hadn't heard the other references presented in this article, but if Jared and his brother had scriptures or traditions from their fathers about the flood, then the idea of glowing stones would have been common. As God has already answered the light issue with Noah, He required the brother of Jared to find that answer first, but the other issue, the issue of air, was not answered previously, and so God answered that one more directly.

A friend related recently that a temple excavation in Peru dated back to the Jaradite era. In that excavation they found "16 stones of curious workmanship". We have not been able to find this information again yet, perhaps someone else knows about this. It would stand to reason that those stones, touched by the finger of God, would be considered very sacred and placed in a sacred place