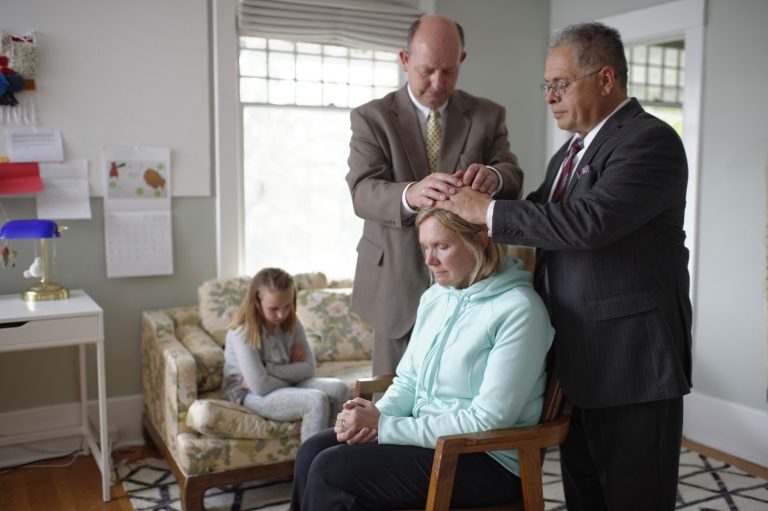 One of the purposes of priesthood power is healing. Sometimes the inspiration received for the blessing defies logic, and the one giving the blessing proclaims blessings that are mind-boggling…

“He is Going to Live”

Boanerges Rubalcaba shared this powerful story about when words came out of his mouth in giving a blessing that were completely different from those of his professional mind.  He writes,

“That day was particularly difficult. I had worked very late in my laboratory, and when I arrived at home, I was very tired and the only thing I wanted was to take a shower and go to bed. Then the phone rang, and I heard an anguished voice asking for me. It was the voice of a mother whose son was in the hospital in great danger, close to dying. She wanted me to go and see him and bless him. My tired natural man was telling me do not go; let somebody else do it. My spirit man overcame my natural one and I answered, “Of course I’ll be there in few minutes.”

“We arrived at the School of Medicine hospital where I happened to be a professor. When I arrived, I saw the family members in great anxiety. They had been informed by the medical personnel that it was not a matter of “if” but “when” my friend was going to die.

“Before we blessed my friend, I asked the resident physician at the hospital (one of my former students) to tell me what had happened. He explained the problem to me in detail, proving with strong medical evidence that they had done everything possible and that my friend was soon going to die. With great sorrow I faced reality. I returned to my friends, and I told them what I had learned.

“When we entered to give my friend a blessing, I saw multiple tubes throughout his unconscious body, and I confirmed in my mind again the fact that my friend was going to die, but we proceeded with the blessing.

“Using consecrated oil my friend blessed him and I proceeded to seal the blessing.  When I started to articulate the words of the blessing, I SUDDENLY AND STRONGLY FELT TO TELL HIM TO LIVE, TO BE HEALED.  At the same time, I rejected the thought since I as a physician knew that my friend was going to die. My feeling inside grew stronger, that I should tell him to live and be healed. It was the whisper of the Spirit telling me what to do and what to say, telling me, ‘He is going to live, just bless him with life, with health.’  I commanded his illness to leave him! I told my friend that he was going to live to take care of his wife and his children, and to bring happiness to his mother. I sealed this command in the name of our Lord Jesus Christ.”

After several long months of recovery, this man was slowly healed through his faith.  Brother Rubalcaba continues,

“One night, the phone rang at my home. It was my recovering friend who told me, ‘I have been told today that I do not have to return to see the doctor anymore. He told me that I was an exceptional case, that I should not be alive. The doctor said that I had NO chance of survival and that this is one of those things that they will never understand.’   My friend ended the conversation saying that ‘The doctors might not know why I was healed but you and I understand it very well!”’[i]

Yes, only those with faith can understand how a person on death’s door could come back to abundant life through a Priesthood blessing…

Words of Healing Pronounced to Woman in Diabetic Coma

Sherry shared a remarkable priesthood blessing that was given to her mother by her Bishop.  She writes,

“In the mid-80’s, I received a call from my dad requesting my help in getting my diabetic Mom to the hospital.  He said he hadn’t been able to wake her (her left foot had been removed a couple of years earlier due to gangrene).

“When the doctor examined her foot, (her last good one) he looked at me solemnly and I knew it was serious. There was a hole in her foot where the gangrene had exploded out… He told me to call our Bishop immediately and contact the family because she would not make it through the night… in that order he said, ‘She was in a diabetic coma, where no one comes back from unless it’s a miracle!’  When our Bishop arrived, they had taken her up to a room to get her ready for surgery.

“Our Bishop immediately pronounced on her a strong blessing of health and wellness. The moment he said Amen she woke up startled!  She looked at Dad and demanded to know why he brought her to the hospital and ruin her first actual sleep in years… (my mom suffered from insomnia and when she was in a good sleep everyone knew not to disturb her) …

“With tears in Dad’s eyes, he began to explain things to her, when suddenly in came the surgeon and immediately apologized for coming in the wrong room. I asked him who he was looking for, and he said my mom’s name. Through sobs I told him that he was looking at her… he was stunned and replied that the woman he was seeing was dying and in a coma. I then explained that she had just received a blessing from our Bishop and Dad.  It was then that Mom fully realized what happened and began to cry…”

‘Every person who dealt with mom that day and for the next two months were deeply touched and knew she was saved by divine intervention.”[ii]

What a powerful reminder of how the Spirit’s declarations sometimes go against common sense.  He can send words to the minds of Priesthood holders to say things they would never otherwise conceive of.  In this last account we will see how the Spirit can even challenge our deeply held spiritual paradigms as words are pronounced in a blessing…

It’s Not as It Seems

A mother suddenly became extremely ill and had a heart attack. When the family realized the gravity of the situation, they all came to visit her. She asked her son (that I’ll call Ben) to give her a blessing of health. In this priesthood blessing, Ben felt strongly prompted to inform her that she would be COMPLETELY HEALED, however, two days later, she died! Ben was devastated, and the foundations of his faith were shaken to the core!

A few weeks later another member of the family needed a blessing and asked Ben for one. He sadly declined by saying, “My blessings don’t work!”

Shortly after this, the daughter of the deceased woman had a moment of enlightenment that provided understanding. Her mother appeared to her in a dream and told her (the daughter) to tell Ben to stop agonizing about that blessing, and that he had been wrong to think that his blessing hadn’t worked. The blessing was EXACTLY what she had needed. She hadn’t required a physical healing because it was her time to die. His blessing had healed her spiritually!  She explained that when she felt she might die, she was very fearful that she wasn’t worthy to enter God’s presence. His blessing prepared her for the next step; calmed her fears, filled her with peace, and prepared her to meet the Lord. She told her daughter to tell the son to realize that he HAD been inspired of the Lord with the words that came into his heart and mind.[iii]

The words that Ben felt strongly to say were from the Spirit, who absolutely understood what was needed.  The words the Spirit gave him were specifically designed to help his mother pass to the other side with spiritual healing.  The words were for the next life, not this one.

One of the purposes of priesthood power is healing.  Sometimes those giving the blessings say things that defy logic.  Thank goodness God knows the end from the beginning and uses priesthood blessings to test our faith and bring us physical AND spiritual healing.

You Can CONTACT me with your feedback [email protected]

It is my belief and experience that God uses Priesthood Blessings to help us understand His will, and that through that means He does not test our faith, but rather He reinforces our faith. I've had similar experiences to the ones in this article. They also increase our focus on God's love for each of us.

I appreciate these stories. It seems faith is very rare to be found these days.. sometimes even amongst many church members. Faith is real and the FIRST principle of the Gospel of Jesus Christ.