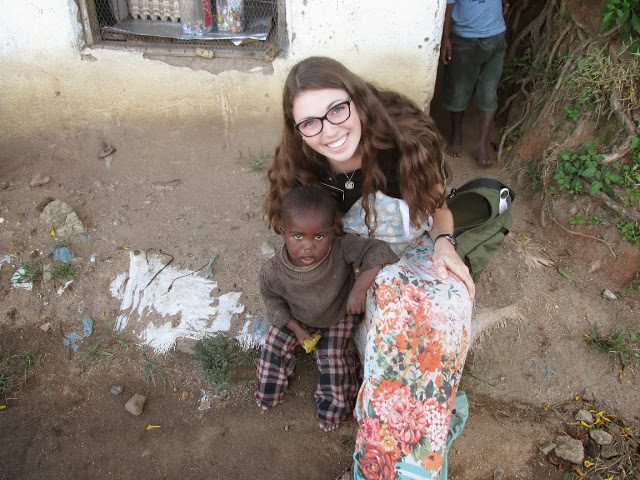 When in All of Eternity?

Our daughter Michaela, currently serving a mission in Zambia, has a mane of thick, wavy hair. If I can have requests in the resurrection, I am hoping to ask for hair just like that. It’s part of her signature, a mark of her identity.

She sent a warning in her last email, however. “For all of you who plan to move to Africa one day, I highly recommend great caution when getting haircuts. Azungu hair is very different from African hair. So, I told and showed the lady how much hair I wanted cut off and she ended up cutting about double.” Michaela’s eyes grew huge with alarm after the woman took scissors to the first swath of hair and she tried to stop her, but to no avail. She wrote home, “My hair has been chopped.”

She says it’s hard enough to feel good about the way she looks in Africa anyway. The water and electricity are off much of the time. A shower is a treat. She must wash her clothes by hand each time she wears them because insects sometimes lay eggs in her skirts when she sits down to teach. Her shoes are worn to tatters. So I imagine losing her long hair was another blow.

But she reported the incident without dismay, writing, “When in all of eternity will this matter? Maybe my hair is chopped, but whatever. Eternally, it doesn’t really matter. I’ll embrace it.”

She can’t be fooled into thinking that a slip of the scissors that cuts off your precious hair is enough to be bothered about. Why? Because she knows what real heartache and human suffering looks like. People she loves in Africa sleep in hovels curled into fetal positions to stop the aching from their empty stomachs. She’s been to visit a less active in an African hospital who was just a heap at the end of a long dark hall lined with other heaps of humanity, all sick, all sitting on the floor unattended. The woman had had her face smashed in by a brick by a workman who was trying to force her to over pay for a service.

She’s seen the rains come in torrents and wash out houses, leaving the dead in their wake. She’s picked her way across muddy streets contaminated with polluted water. She’s seen a 19-year-old investigator, eager to join the Church, drop dead for no apparent reason and then heard his mother blame the missionaries as having been responsible because they represented a Satanic cult.

So, of course, she now knows that having a bad hair day or a bad few hair months is nothing.

“When in all of eternity will this matter?” is not a bad measuring stick for the hundreds of small calculations, little and big choices, nuanced emotions that we pick our way through every day.

“When in eternity will this matter?” We can think of this standard before we succumb to little irritations that fall in our path. Is it worth dampening an eternal relationship over a small difference? Is my supposed sense of dignity so important that I can’t handle the rough and tumble of reality, the rudeness of a world that’s sometimes indifferent to me? Is it so important in the eternal scheme of things that everyone agrees with my viewpoint on a particular issue?

Are my little huffs, my emotional whirlwinds, my disappointments so critically important that they should occupy my mind and heart when I compare them with eternity? How much does it matter that I appear to be a person of importance in the world?

I laughed once at a cartoon that showed two ants, both not much more than a couple of ink drops on a rock, arguing which one was the tallest.

Thus, can I think before I take offense, how much does this really matter in the eternities? Can I ask myself when I am stressed, is it really worth disturbing the calm pool of my soul for this issue that will fade in time and no one will remember—not even me?

You may think, “But the things that offend and hurt me aren’t small issues.” It is true they may feel like the weight of a dump truck on your chest now, but “when in eternity will this matter?”

You may object, “But this duty before me really does worry me.” Yet, is it worth disturbing your eternal soul with stress over something that ultimately in the eternal scheme of things means so little?

We make conscious choices every day how about to respond to things, what drags and pains and anxieties we let attach themselves to our souls like barnacles. Are these negative emotions really worth investing in, when you consider that your playing field is eternity? Would you choose to play in a mud puddle when you have a vast, blue ocean to consider?

It’s not just the petty emotions we want to tame when using eternity as a measure, it is also the choices of how we spend our life’s short day.

Our daughter, Mariah, who is getting married, stopped by the home she grew up in to show her future husband a piece of her past. She knocked on the door and asked if she could just take a peek. The current owners kindly invited her in.

Now, this was not just any home. It was the dream home that Scot and I had designed with an eye to staying there forever. We dreamed our grandchildren would play in the stream that ran through the yard.

This is the home we built ourselves. We agonized over every decision, wanting it to be just right. We chose the carpet color to match the way a mountain field looked in the morning light, debated endlessly over the kitchen cabinets, thought for a week about the door knobs.

It has been a few years since we built that house and a long time since we moved out. That carpet that looked like a mountain field was long ago sent to the dump, replaced by hardwood. The cabinets ended up stacked in a landfill somewhere.

When Mariah described the changes in the house to me, I thought about the mind and emotion share I’d given to that house—and how it was all so fleeting—because “When in all eternity will it matter?” Houses fall, a victim to the ramshackling of time. Our best performances or awards will just end up on a yellowing program in a basement box. The tears we cry that are so real and powerful now will all be dried and compensated for later. The books we write go out of print.

Now, all of this is not to suggest that nothing matters. No, quite the opposite. Many things about this life are weighty and matter eternally. When in all of eternity will some things matter? Always. They may matter more than we even have capacity to imagine.

The challenge is to put the right proportion on things and give them the appropriate weight. The trick is to pick your way through and not get caught up in the thick of thin things.

But life barrels at us so fast that to step back and consider what that appropriate weight is may seem difficult. That’s why I like this phrase. “When in all of eternity will this matter?”

My husband’s father was a geologist who was used to looking at the earth according to its geological timeline, which, of course, is measured by the millions of years. Thus when he talked to his sons he’d say, “Boys, never make a decision you won’t be happy about in a hundred thousand years.”

Some things are weighty and matter eternally and some things that seem demanding and important are not. Wisdom teaches us which are which, but it is wisdom we have to dip into regularly because the unimportant knows how to press itself upon us as if it matters.

Ultimately, one thing we can be certain about; every person we meet is neither ordinary nor forgettable. They are eternal souls and in all of eternity they will always matter.

To our missionary daughter, Michaela with the whacked-off hair in Africa, I am grateful you let it go and focus instead on teaching eternal doctrine to eternal souls. You have given me much to think about.

I was inspired by your article. What a beautiful way to think about things.Lorin Saunders, Janie Kapp Perry's cousin

Thank you Maurine Proctor! I almost feel like I know you because of the eternal truth that seems to always comes through in the wisdom of your words . I felt compelled this morning to tell you that. Just to say THANK YOU! I am sure that you have heard it from many others. You always convey wisdom so powerfully magnified by the Spirit whenever you write an article in Meridian. I will always take the time to read anything that has your name on it. Thank you again for magnifying the talent you have been blessed with.