What Kind of Ore did Nephi Use to Make the Plates? | Meridian Magazine 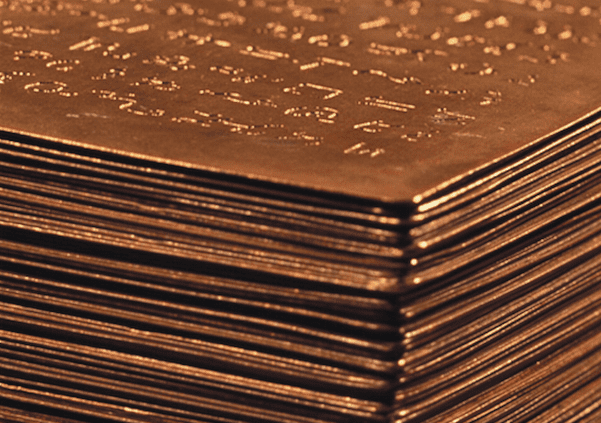 What Kind of Ore did Nephi Use to Make the Plates?

“I did make plates of ore that I might engraven upon them the record of my people.” (1 Nephi 19:1)

Shortly after arriving in the New World, Nephi reports making “plates of ore” to engrave his account on (see 1 Nephi 19:1). Although he does not tell us specifically which kind of ore he used, just before making the plates he mentions finding “all manner of ore, both of gold, and of silver, and of copper” (1 Nephi 18:25).[i]

Today, readers typically read these statements separately, due to the chapter divisions made by Orson Pratt in 1879. In the original Book of Mormon, however, there was no chapter break between 1 Nephi 18:25 and 19:1.[ii] Thus, one can agree with Book of Mormon scholar Brant A. Gardner that there may well be “a direct connection between finding ore and creating the plates.”[iii]

As it turns out, an alloy that was called tumbaga by the Spanish was known in pre-Columbian Mesoamerica. Tumbaga generally consisted of copper, gold, and sometimes silver—the same three metals Nephi explicitly mentions finding before making his plates. As early as the 1960s, metallurgical technician Read H. Putnam suggested that this alloy may be the material used to make the Book of Mormon plates.[iv]

More recent work by geologist and engineer Jerry Grover suggests a weight range of between 53–58 lbs. Grover also determined that the plates must have been approximately 90% copper, 8% gold, and 2% silver. Otherwise they would have weighed too much.[vi]

What about the color of tumbaga? Eyewitnesses described the plates as being “golden” or having “the appearance of gold.”[vii] William Smith, however, did say that the plates consisted of “a mixture of gold and copper.”[viii] While the alloy was naturally a reddish color, it was commonly made to look golden by leaching out the copper on the surface.[ix]

Plates of tumbaga make a lot of sense, for several reasons. Gold is too soft, and thin gold plates would not hold up well. The copper makes tumbaga more rigid and resilient, even in thin sheets.[x] Moreover, the thin gold surface that appears after the gilding process would have made the plates easy to engrave, and would also have protected the surface from rust and corrosion.[xi]

According to Nephi, he was preparing a record of the “more sacred things,” and he only ever wrote things on his small plates that were of sacred significance (1 Nephi 19:5–6). In the temple or tabernacle of ancient Israel, most of the most sacred objects were gold or gold plated.[xii] These sacred words and objects were most highly valued and making them of the most precious ore reminded all who saw them of their enormous, eternal value.

Nephi prepared his small plates as his people were completing the construction of a temple “like unto Solomon’s temple” (2 Nephi 5:16; cf. vv. 28–32). Numerous connections have been made between Nephi’s account and the temple.[xiii] As a temple text, the plates on which Nephi made his sacred record would also have been a temple object. These holy records were handed down in the priestly lineages of Jacob and then of Alma.

Thus, the nature of tumbaga served the purposes of the Lord practically, functionally, meaningfully, symbolically, and spiritually. This alloy readily available to Nephi allowed him, and other record-makers mentioned throughout the Book of Mormon, to make plates that would have the necessary utility for engraving records while also having the proper golden appearance of a sacred temple object.

Jerry D. Grover Jr., Ziff, Magic Goggles, and Golden Plates: The Etymology of Zyf and a Metallurgical Analysis of the Book of Mormon Plates (online PDF, 2015).

[i] The wording of 1 Nephi 18:25 can be somewhat confusing, since it uses “both” and then lists three different ores. Jerry Grover, a professional geologist, explains, “Native gold and silver nearly always occur together as one ‘ore’ in nature. Technologies to separate gold and silver (called ‘parting’) were not known to be practiced in the Old World before the fifth century B.C …. There has been no evidence discovered in the New World that any pre-Columbian culture possessed gold and silver separation technologies.” Thus, Grover explains, “the most consistent reading of the scriptural passage above is a binary ore of gold and silver, with the additional separate ore being copper.” Jerry D. Grover Jr., Ziff, Magic Goggles, and Golden Plates: The Etymology of Zyf and a Metallurgical Analysis of the Book of Mormon Plates (online PDF, accessed November 13, 2015), 79.

[ii] Joseph Smith, The Book of Mormon: An Account written by the Hand of Mormon, Upon Plates taken from the Plates of Nephi (Palmyra, NY: E.B. Grandin, 1830), 50.

[ix] “Of What Material Were the Plates?” Journal of Book of Mormon Studies 10, no. 1 (2001): 21, explains: “It is of interest that tumbaga was commonly gilded by applying citric acid to the surface. The resulting chemical reaction eliminated copper atoms from the outer .0006 inch of the surface, leaving a microscopic layer of 23-karat gold that made the object look like it was wholly gold” (spelling silently corrected). It is important to clarify that in pre-Columbian America, only the use of oxalic acids is documented for use in depletion gilding. Furthermore, if the plates contained silver (as suggested by 1 Nephi 18:25), acid gilding would not have removed the silver from the surface. Alternative methods for gilding would have been necessary, such as the application of special aqueous pastes or a solution of alum, iron sulphate and salt at room temperature. After ten days, the surface was washed with a salt solution and then heated to convert the spongy surface to a smooth, compact, richly golden surface. There are also other methods available that would have removed the copper, silver, and other impurities from the surface. (Jerry Grover, personal communication, December 13, 2015).

[x] Robert F. Smith, “The ‘Golden’ Plates” in Reexploring the Book of Mormon: A Decade of New Research, ed. John W. Welch (Provo, Utah: FARMS, 1992), 275–277. As an alternative to tumbaga, Jerry Grover (via personal communication, December 13, 2015) was simply copper covered in a thin layer of gilded gold. This practice is also attested in Mesoamerica.

[xi] The gold guild may have worn off on the edges, allowing for the oxidation of the edges. Josiah Stowell reportedly saw a small corner of the plates when part of the frock Joseph was covering them in slipped away. He said the plates “resembled a stone of a greenish caste,” which is consistent with the plates being made of a copper alloy which had oxidized. See Morning Star 8, no. 29 (Limerick, Maine; November 16, 1832).

[xii] These include the ark of the covenant, the incense altar, the table of the bread of the presence, the menorah, and the cherubim. See William J. Hamblin and David Rolph Seely, Solomon’s Temple: Myth and History (New York: Thames and Hudson, 2007), 19–20, 25.

The ore that Nephi used should not necessarily be relevant to the weight of the plates that were hefted by Joseph Smith's witnesses. Weren't those plates made centuries later by Mormon for his abridgement of Nephi's two sets of plates and others?