What is the Significance of the Great and Spacious Building? | Meridian Magazine 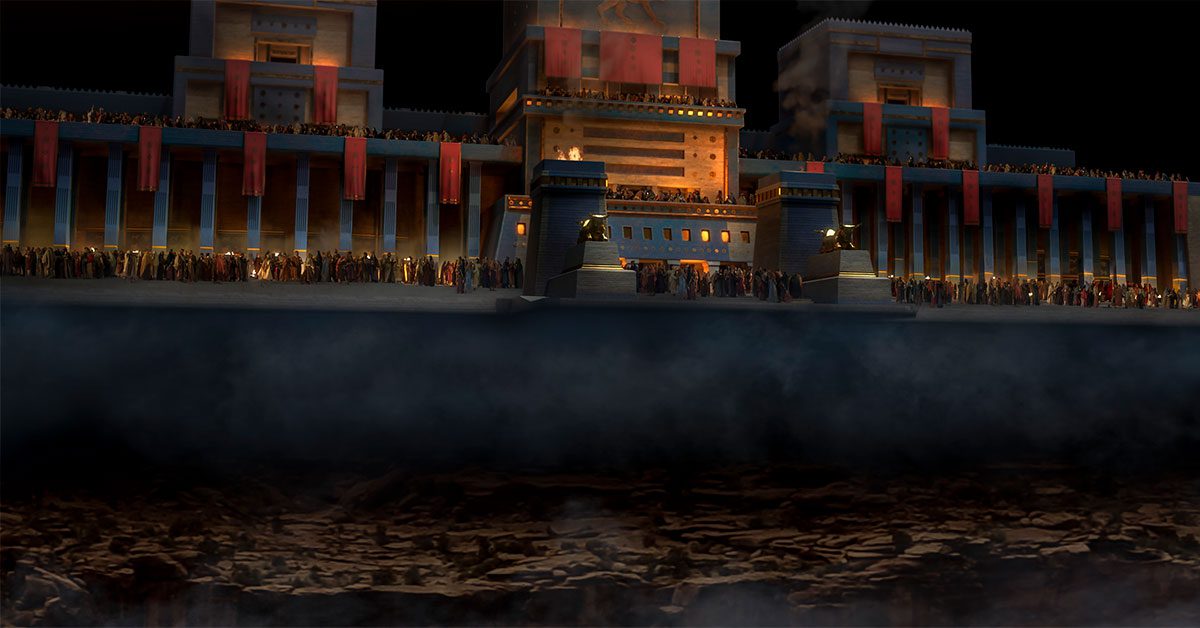 What is the Significance of the Great and Spacious Building?

“And the large and spacious building which thy father saw is vain imaginations and the pride of the children of men” 1 Nephi 12:18

In Lehi’s prophetic vision of the tree of life, he described a great and spacious building. After partaking of its fruit and experiencing for himself the inexpressible joy it brought to his soul (1 Nephi 8:10–12), he was surprised to find that some had once partaken of the fruit but afterwards felt ashamed and fell away.

And I also cast my eyes round about, and behold, on the other side of the river of water, a great and spacious building; and it stood as it were in the air, high above the earth. And it was filled with people, both old and young, both male and female, and their manner of dress was exceedingly fine; and they were in the attitude of mocking and pointing their fingers towards those who had come at and were partaking of the fruit. And after they had tasted of the fruit they were ashamed, because of those that were scoffing at them; and they fell away into forbidden paths and were lost (1 Nephi 8:26–28).

Lehi stated that there were many others who pressed their way toward the building, some of whom were drowned in the depths of the water in the attempt. Others entered into the building and joined those who were mocking those who had partaken of the fruit (1 Nephi 8:31–33). During his vision of the things which his father saw, an angel taught Nephi that the great and spacious building represented the vain imaginations and the pride of the children of men” (1 Nephi 12:18; see also 11:36). Each of the words pride, imaginations, and vain help to shed light on the significance of that strange building.

The pride of Jerusalem was a major concern of Lehi’s contemporary prophet, Jeremiah. The Lord said that he would ruin the pride of Judah and Jerusalem because they refused to hearken to his words but chose to “walk in the imaginations of their heart” (Jeremiah 9–10). Jeremiah pleaded with his people to repent, “before your feet stumble upon the dark mountains, and while ye look for light, he turn it into the shadow of death, and make it gross darkness” (Jeremiah 13:15–16). When they refused to hearken to his words, Jeremiah could only weep at the inevitable fall (Jeremiah 13:17). We are reminded of those who were ashamed by the mockery of those in the strange building and fell away from the tree into forbidden paths and are lost (1 Nephi 8:28).

The word Jeremiah used for pride (ga’ah) is of interest. “All meanings of the root g’h and its various derivatives are grouped around the basic meaning ‘to be/become high.’”1 Sometimes it is used in a positive sense in reference to God, but it is more often used negatively to denote “human pride, arrogance, and presumption.” In Lehi’s vision, the building “stood as it were in the air, high above the earth” (1 Nephi 8:26).

If the great and spacious building in Lehi’s dream reflected the pride of the world, what did the angel mean by “imaginations”? One possibility is that it refers to the thoughts or plans that people may have which are contrary to those of God. For example, Jeremiah asked the people of Jerusalem, “How long shall thy vain thoughts lodge within thee?” (Jeremiah 4:14). Here the word “thoughts” (mahsebot) more accurately means “schemes” or “designs,” which can be either good or bad, but in this case are clearly evil.2

Another possibility is suggested by the work of Aida Besancon Spencer on the Hebrew word shereeroth. Spencer explains that shereeroth is a kind of idolatrous self-reliance rendered “imagination” in our King James Bibles and in other translations as “stubbornness.” It appears ten times in the writings of Jeremiah (Jeremiah 7:24; 9:14; 11:8; 13:10; 16:12; 18:12; 23:17), and twice elsewhere (Deuteronomy 29:19; Psalm 81:12). In these passages, it is tied closely to the events of the Exodus where Israel rebelled against God. It is used to describe those Israelites who broke their covenant with God and became idolatrous, saying, “I shall have peace, though I walk in the imagination of mine heart” (Deuteronomy 29:19). In such passages, we find “the interesting intertwining of attraction to foreign idols and a false sense of security, since the person who acts in this manner will not be pardoned but will be singled out for calamity, in other words, captivity.”3

Spencer notes that in its transitive verb form, shereeroth essentially means “to twist, to twist together, to wind together, to knot together” much like muscle sinew, a cord, or even a chain. Metaphorically, it denotes “a strength or firmness which is, in essence, twisted or stubbornness. It appears as self-reliance to those relying on it, but stubbornness or twisted strength to God”4 Like the positive Hebrew term for faithfulness (emunah) the term shereeroth signifies firmness, but it is wholly negative, for “one is understood as ‘truth’ while the other is understood as ‘perversity.’” One comes from God, while the other emanates from the individual.5 Those in the Bible who possess this characteristic are seen not only as independent from but also in a state of rebellion against God and ripe for captivity and destruction.

The angel also taught Nephi that the pride and imaginations, which the building typifies, are “vain.” The Hebrew word hebel, rendered “vanity” in the King James Bible, can also mean “breath” or “vapor” and suggests “what is without consistency or lasting quality.”6 “Deriving from this are such meanings as fleeting (human existence), vain and ineffectual, and even deceitful (idols that cannot satisfy a worshiper’s desires.”7 Jeremiah sometimes used the term as a euphemism for Baal worship. “They went after the Nothing and became nothing” (Jeremiah 2:5 Lundom Translation).8 It is something temporary or transient, which passes away.

There is an element of unreality to the great and spacious building. It stands mirage-like in the air. Unlike a tree which is rooted in the earth and alive, the building, for all its vaunted and deceptive promise, lacks life and—unlike the fruit of the tree of life—can never deliver lasting happiness. Those who reject and turn away from the tree of life and the love of God, to go after the great and spacious building, will eventually realize they have been cheated. They have exchanged all that is meaningful and worthwhile for nothing.

The dangers Lehi saw in his dream are just as serious now as they were anciently. Elder Neil L. Anderson recently warned,

In our world today, the adversary’s construction crews are working overtime, hastily inflating the large and spacious building. The expansion has spread across the river, hoping to envelop our homes, while the pointers and the scoffers wail day and night on their internet megaphones . . . . Let us remember Lehi’s words: “We heeded them not.”

Sometimes it may be difficult to risk the disapproval and ridicule of others.

Although we need not fear, we are to be on guard. At times, little things can upend our spiritual balance. Please don’t allow your questions, the insults of others, faithless friends, or unfortunate mistakes and disappointments to turn you away from the sweet, pure, and soul-satisfying blessings that come from the precious fruit of the tree. Keep your eyes and your hearts centered on the Savior Jesus Christ and the eternal joy that comes only through Him.9

Lehi observed that “after” some had partaken of the fruit that “they cast their eyes about as if they were ashamed” (1 Nephi 8:25). This could suggest that those who turned away (having once partaken) may have stopped feasting upon the love of God.

Partaking of the fruit of the tree is not a one-time event. After we have partaken of the love of God we must continue to do so. Stephen W. Owen observed,

it is possible for young people to be raised in a Latter-day Saint home, attend all the right Church meetings and classes, even participate in ordinances in the temple, and then walk away into forbidden paths and [become] lost.10

It is not enough to have been once fed by the fruit of the tree. We must continue to be nourished.

One way we can do this is by continuing to feast upon the words of Christ in the scriptures. Moroni counseled us that when we read the Book of Mormon we should “remember how merciful the Lord hath been unto the children of men” from the beginning down until today. (Moroni 10:3). As we do so, we should especially remember his many mercies throughout our own lives. As we ponder these personal blessings, we will gain a greater appreciation of His love for us as well as for others. This sense of gratitude will fortify us against selfishness.

There may also, surprisingly, be benefits to the Saints being held up to the gaze and mockery of others. Elder Neal A. Maxwell taught, “the arrogance of critics must be met with meekness and articulateness of believers. If sometimes ringed by resentment, we must still reach out, especially for those whose hands hang down.”11 By standing fast for what is true and real and of eternal value we may cause many, who have been distracted or deceived by cunning pride and vain imaginations of the world, to come and partake or to return and partake of the inexpressible love of God.