What Does the Alma Say about Avoiding Sexual Sin? | Meridian Magazine 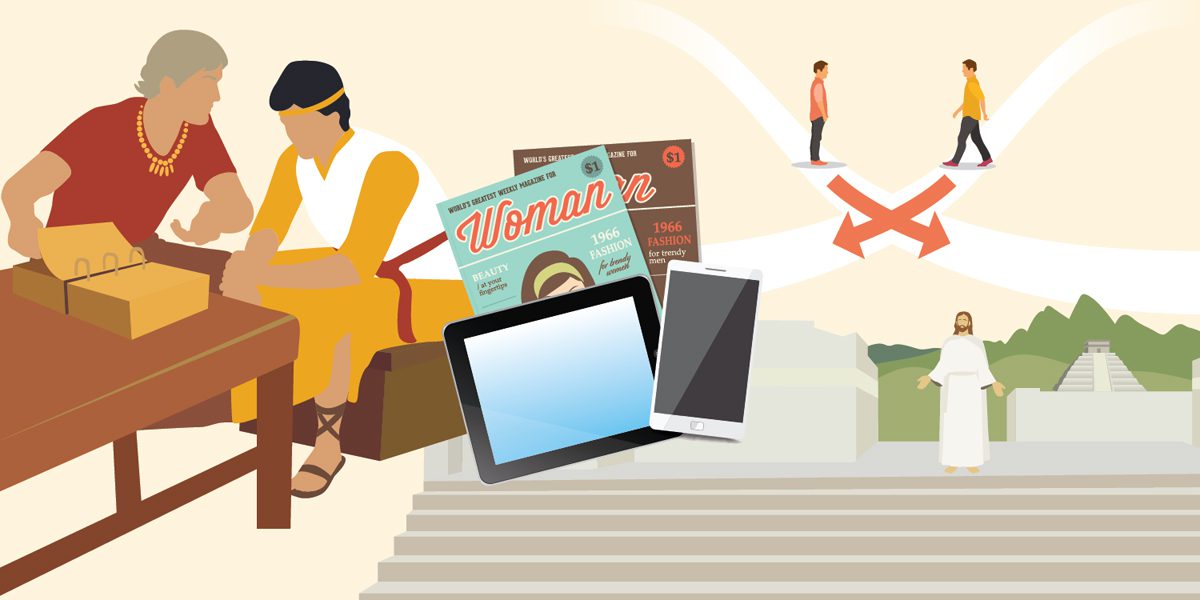 What Does the Alma Say about Avoiding Sexual Sin?

“Now my son, I would that ye should repent and forsake your sins, and go no more after the lusts of your eyes, but cross yourself in all these things; for except ye do this ye can in nowise inherit the kingdom of God. Oh, remember, and take it upon you, and cross yourself in these things.”
Alma 39:9

One of Alma’s younger sons, Corianton, had committed serious sexual misconduct, for which Alma firmly reproved him (Alma 39:1–8). The fact that he did this while serving as a missionary, causing others to fall away as well (Alma 39:11–12), added to the seriousness of his sins,[1] making them “an abomination in the sight of the Lord; yea, most abominable above all sins save it be the shedding of innocent blood or denying the Holy Ghost” (Alma 39:5).

In ancient Israel, under the law of Moses, many types of sin—including unpermitted sexual relations, various defiling customs, or worshipping false spirits—were forbidden to the holiness that God required of His people (see, especially, Leviticus 18 and 20). Corresponding to the “most abominable” sins mentioned by Alma, the crimes of cursing or rejecting God, of committing intentional homicide, and of engaging in disallowed sexual relations were the most serious.[2]

Although Alma stressed that it is “not easy … to obtain forgiveness” from such serious sins (Alma 39:6), he nonetheless lovingly and compassionately encouraged his son to “repent and forsake your sins, and go no more after the lusts of your eyes” (Alma 39:9). He then encouraged Corianton to “cross yourself in all these things” as a means of avoiding further sexual misconduct (Alma 39:9).

Although this phrase may seem confusing, in 1830 when the Book of Mormon was translated, “to cross” meant to erase, cancel, hinder, or interfere with.[3] In the common idiom “don’t cross me,” for example, cross is being used to warn people against interfering with a person’s plans.[4] So one way to understand Alma’s counsel to “cross yourself” might be to prevent, interfere, or hinder or stop yourself from committing sin.

Another clue to the meaning of this stern moral warning may be found in the Savior’s teachings to the Nephites. In the Sermon at the Temple, Jesus echoed His teachings in the Sermon on the Mount, where He taught “that whosoever looketh on a woman, to lust after her, hath committed adultery already in his heart” (3 Nephi 12:28; Matthew 5:28). Only to the Nephites, however, did the Savior clarify that this is because “it is better that ye should deny yourselves of these things, wherein ye will take up your cross, than that ye should be cast into hell” (3 Nephi 12:30).[5]

The phrase “deny yourselves of these things” is very similar to Alma’s twice-repeated admonition to “cross yourself in all these things,” and the Savior equates this with taking up a “cross.”[6] Furthermore, in both instances, the lust that comes merely from looking—the “lust of your eyes,” as Alma puts it—is among the “things” being talked about. So, another interpretation of “cross yourself” could be to deny yourself sexual misconduct in all its forms, including lusting after it.[7]

Abinadi’s trial in the court of Noah also holds a clue to the meaning of “cross yourself” (Mosiah 12–17). There, Noah’s priest “began to question” Abinadi, “that they might cross him” (Mosiah 12:19). This brings to mind the “cross-examination” by an opposing attorney. To “cross yourself,” then, would also call for self-examination, to question and challenge yourself and ensure that your desires are in check, with passions bridled, properly channeled and held in check, so that you “may be filled with love” (Alma 38:12).

Whether you think of it as a form of preventing, interfering, hindering, denying, divinely protecting or thoughtfully examining oneself, all of these interpretations suggest that to “cross yourself” means “self-mastery,” as President James E. Faust taught in 2006.[8] Self-mastery is an important skill in achieving all types of self-improving goals and in avoiding all forms of temptation and sin, but it is especially important in our day in regard to enjoying the blessings of sexual purity.

It is crucial, as it was in Alma’s day, that all who would serve the Lord “go no more after the lust of your eyes”—which President Ezra Taft Benson taught applied to pornographic media today.[9] Speaking to young men, Elder Neil L. Andersen declared, “The Lord’s standard of worthiness gives no allowance for pornography among those officiating in the ordinances of the priesthood.”[10]

President Gordon B. Hinckley warned that pornography “is like a raging storm, destroying individuals and families, utterly ruining what was once wholesome and beautiful.”[11] The pervasiveness of pornography has only increased over the last decade, largely due to the Internet. In today’s world, how might you “cross yourself in all these things”?

Take actions which prevent, hinder, or interfere with your ability to access pornographic material, such as installing internet filters on all your devices—including mobile devices. Be sure someone besides yourself sets the passwords to these filters.

If necessary, deny yourself the opportunities to be tempted by turning off the computer, TV, or walking out of the theater to avoid provocative content which triggers inappropriate thoughts and desires. Occupy your time and your mind with productive and wholesome activities and gospel living, leaving no room or time or space in your mind for inappropriate thoughts to take root.[12]

Finally, make yourself accountable to the Lord through prayer. Elder Dallin H. Oaks taught resisting temptation requires “individuals to recommit to … those things that purify and strengthen them” including “daily meaningful prayer and scripture study.” While praying, engage in thorough and honest self-examination to be sure you are always keeping your thoughts pure and wholesome, and to avoid the small and easy self-justifications that can quickly lead down the wrong path.[13]

Alma warned the people in Ammonihah that in the end “our words will condemn us, yea, all our works will condemn us; . . . and our thoughts will also condemn us; and in this awful state we shall not dare to look up to our God” (Alma 12:14), unless we repent of these things.

Just as Alma promised Corianton that he could repent, that guarantee extends to anyone who is ensnared in pornography or other sexual sins today. Elder Dallin H. Oaks taught, “Those struggling with pornography need our compassion and love as they follow needed principles and steps of recovery. … Through proper and complete repentance, they may become clean, pure, and worthy of every covenant and temple blessing promised by God.”[14] Yet also as Alma taught, the repentance process may not be easy (Alma 36:9). Still, Elder Oaks assured all that, “Through the grace of Jesus Christ, all can be forgiven and receive the power to change.”[15]

President Gordon B. Hinckley, “A Tragic Evil among Us,” Ensign, November 2004, online lds.org.

[5] Jesus emphasized this teaching several times. In all three of the New Testament synoptic Gospels, Jesus required his emissaries to be willing to bear heavy costs of true discipleship, even unto death if necessary. See Matthew 10:38–39; 16:24; Mark 8:34; Luke 9:23; 14:27. Christ’s words in this regard can be related to his invitation to take His yoke upon oneself (Matthew 11:29), and some commentators have seen this concept presaged in Isaac’s willingness to carry the wood for his own sacrifice (Genesis 22:6–7). See discussion in W.D. Davies and Dale C. Allison, The Gospel According to Saint Matthew (London, UK: T&T Clark, 1991), 2:222–223. In Matthew 16:24, Jesus taught, “If any man will come after me, let him deny himself, and take up his cross, and follow me.” This was expanded upon in the JST: “And now for a man to take up his cross, is to deny himself all ungodliness, and every worldly lust, and keep my commandments” (JST Matthew 16:26). Even before the crucifixion of Jesus, Jewish texts understood the Hebrew word tala to encompass many forms of execution, including hanging, impalement, and crucifixion (as it is translated in the LXX of Esther 7:9 and 8:13). See Johannes Botterweck and others, Theological Dictionary of the Old Testament, (Grand Rapids, MI: Wm. B. Eerdmans, 2006), 15:667–671.

[6] Metaphorically, this saying about the “cross” may also have something to do with taw, the last letter of the Hebrew alphabet, which looked like an X in paleo-Hebrew. Ezekiel 9:4–6 says that the letter taw was the mark placed on people’s foreheads to protect them from death. This mark is understood as “God’s signature (cf. Job 31:35), as a sign of those who belong to Jehovah, a cultic seal that protects from judgement (cf. Ps. Sol 15:8–10; Rev. 7:2–3; 14:1; Odes Sol. 8:13).” Davies and Allison, Gospel According to Saint Matthew, 222–223. Taking this mark upon oneself signaled that one was subservient to the Lord.

[13] For prayer as an opportunity of self-examination, see Allen E. Bergin, “Psycology and Repentance,” BYU Speeches, October 4, 1994, online at speeches.byu.edu.