What Does Archaeology Reveal about Warfare During Early Nephite Times? | Meridian Magazine 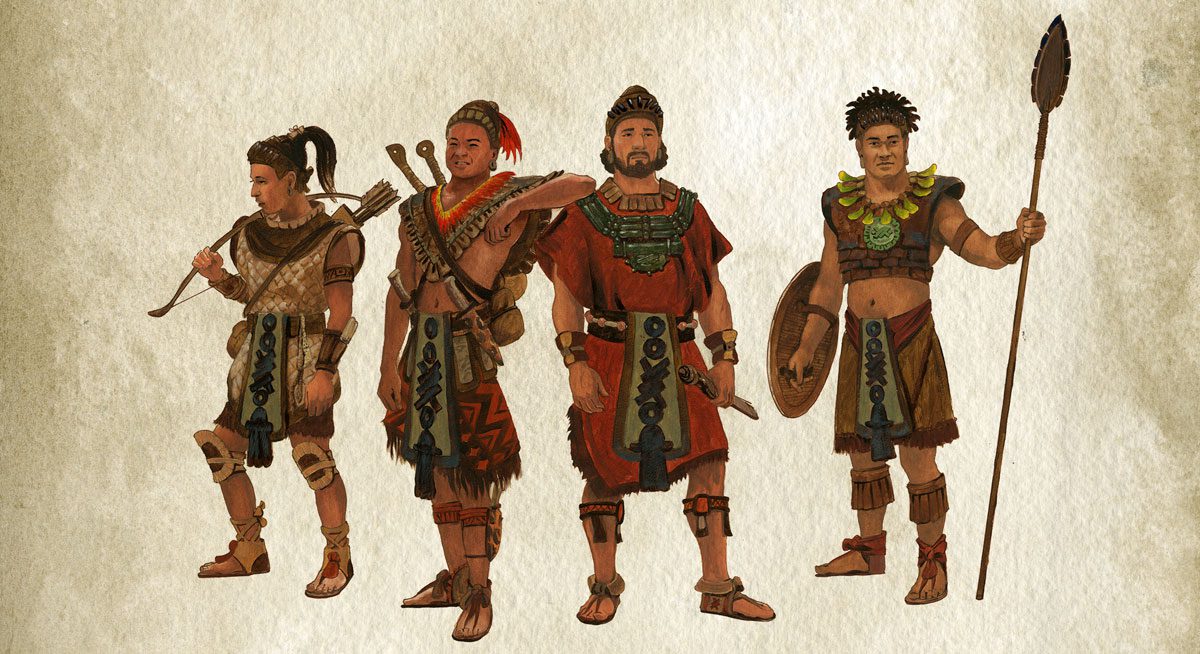 What Does Archaeology Reveal about Warfare During Early Nephite Times?

“Wherefore, we withstood the Lamanites and swept them away out of our lands, and began to fortify our cities, or whatsoever place of our inheritance. And we [made] … weapons of war—yea, the sharp pointed arrow, and the quiver, and the dart, and the javelin, and all preparations for war.”
Jarom 1:7–8

Warfare between the Lamanites and the Nephites was a disturbing reality from the reign of Nephi forward (2 Nephi 5:34; Jacob 1:10; 7:26). Toward the end of his life Jacob wrote of the animosity-driven wars and bloodshed caused by the Lamanites, “wherefore, the people of Nephi did fortify against them with their arms, and with all their might trusting in the God and rock of their salvation; wherefore, they became, as yet, conquerors of their enemies” (Jacob 7:25).

Evidence from Mesoamerican archaeology is generally consistent with this picture of warfare throughout this time period,[3] and suggests that the nature of warfare was changing during that time. Ross Hassig, a scholar of Mesoamerican warfare, believed that around the beginning of the fourth century BC, “a period of increasing military professionalism” began, “and specialized arms … dominated warfare.”[4]

Hassig also argued, “At the same time, fortifications grew in number and size to counter the threat of the emergent armies.”[5] In 1990, John L. Sorenson documented a similar trend in the archaeological record, noting a sharp increase in fortified sites between 400–50 BC.[6] Interestingly, these archaeological trends correspond well with Jarom’s mention of the Nephites fortifying their cities and making weapons of war between 400–360 BC (Jarom 1:5, 13).

The specific weapons listed by Jarom are also interesting. According to Brant A. Gardner, Jarom’s “weapons catalogue includes those most common in Mesoamerica.”[7] Although the mention of arrow, dart, and javelin might seem redundant,[8] standard Mesoamerican weapons inventories included “darts, arrows, [and] spears,” each as a separate weapon with slightly different uses.[9]

Arrows would typically be shot using a bow,[10] while darts were projectiles launched using a device called an atlatl, and spears would either be hand-thrown (javelins) or used as a thrusting weapon (lances).[11] These correspond well with Jarom’s inventory of “sharp-pointed arrow, … dart, and the javelin.”[12]

Under the constant threat of warfare, the Nephites had to adapt and be prepared in order to survive. Thus they fortified their cities (Jarom 1:7) and developed new weapons (Jarom 1:8) and strategies to better meet the needs of their circumstances. Innovation and constant improvement allowed for continued success.

This pattern repeats itself throughout the Book of Mormon. In the aftermath of one of the worst battles of Lehite history in which tens of thousands of Lamanites and Nephites were slaughtered (Alma 28:2–6), Moroni prepared all his men with breastplates, shields of various kinds and thick clothing, which caught their enemies off-guard (Alma 43:19–20).

It was not long before the Lamanites “had also prepared themselves with shields, and with breastplates” and “very thick garments to cover their nakedness” (Alma 49:6), but they were disappointed to find that Moroni had not been idle, but had heavily fortified cities like Ammonihah and Noah which had once been weak points in the Nephites defense system (Alma 48–49).[13]

Later when facing the threat of the Gadianton robbers, the Nephites, under prophetic leadership and counsel once again tailored and adapted strategies and resources to meet the unique threat posed by enemy tactics (3 Nephi 3:21). This time, the people gathered by command of Governor Lachoneus, and under Chief Captain Gidgiddoni, fortified their united resistance in a seven-year plan to starve out the robbers.

Just as the Nephites of Jarom’s and Moroni’s and Gidgiddoni’s time innovated and implemented the latest military technologies of their day, our gospel study habits should also adapt to utilize the latest technologies available to enhance our own spiritual defenses.

The Adversary is taking full advantage of the Internet in his efforts to tempt individuals and destroy testimonies. But the Internet can also be used to strengthen and fortify one’s faith. Not only are digital editions of the scriptures fully searchable and easily available on your tablet or smartphone, there is also a wealth of online resources provided by the Church and independent faithful organizations.

The Church’s Gospel Topics essays provide an encyclopedic resource on common questions. The History portion of LDS.org provides a rich array of historical information and essays, and the Joseph Smith Papers Project makes primary sources related to the life of the prophet Joseph Smith readily available online. Extensive scholarship on the Book of Mormon is available online as well, and can further enhance one’s scripture study.[14]

Elder M. Russell Ballard taught that utilizing these resources, in “a thoughtful study of doctrine and history, coupled with a burning testimony, is the best antidote we have to help students avoid and deal with questions, doubt, or faith crises they may face in this age of information.”[15] Elder Ballard also warned, “not to pass along faith-promoting or unsubstantiated rumors or outdated understandings … from the past.”[16]

Yet Elder Ballard promised that as we implement new resources and technologies, “combining learning by study, by faith, and by pure testimony,” we will bring “about true and long and lasting conversion.”[18] Such conversion is what is truly needed to withstand the attacks of the Adversary and endure these troubled times.

[1] Enos also noted that the Lamanites were “a blood-thirsty people” whose “skill was in the bow, and in the cimeter, and the ax” (Enos 1:20).

[8] Jarom also mentions “quivers,” which are merely a means to carry projectile weapons such as arrows and darts, and were used by both the Aztec and the Maya. See Hassig, War and Society, 138, 248 n.7; Lynn V. Foster, Handbook to Life in the Ancient Maya World (New York, NY: Oxford University Press, 2002), 146.

[10] The exact timing of when the bow was introduced into Mesoamerican warfare is a matter of continued debate. However, in a recent and comprehensive assessment of Maya weaponry, especially chipped-stone weaponry, Dr. Kazuo Aoyama has noted: “Although spear or dart points were more important than the bow and arrow in Classic Maya warfare, both notched and unnotched obsidian prismatic blade points were present in the Copan Valley during the Early and Late Classic periods … . The result of high-power microwear analysis indicate that these points were main used as arrowheads. The bow and arrow was present in the Maya lowlands earlier than has been previously suggested.” Kazuo Aoyama, “Classic Maya Warfare and Weapons: Spear, Dart, and Arrow Points of Aguateca and Copan,” Ancient Mesoamerica 16, no. 2 (2005): 291–304, quote on 301, emphasis added. See also William J. Hamblin, “The Bow and Arrow in the Book of Mormon,” in Warfare in the Book of Mormon, 379–392; John L. Sorenson, Mormon’s Codex: An Ancient American Book (Salt Lake City and Provo, UT: Deseret Book and Neal A. Maxwell Institute for Religious Scholarship, 2013), 413–415.

[11] Ross Hassig, “Weapons,” in Archaeology of Ancient Mexico and Central America, 809: “bows and arrows, spears, atlatls and darts, and slings.” Hassig, War and Society, 173, explained, “as projectiles, from thrown spears and stones, to atlatl darts, to bows and arrows, increased their range, the kill zones expanded, making projectiles more important.”

[12] Since, in the view of Hassig, War and Society, 30, “weapons pioneered by the Olmec” were spreading at this time, it may be of value to consider Jarom’s “sharp pointed arrow” in the light of an Olmec innovation in weaponry. At an early time in Olmec warfare, “Only fire-hardened wooden spears were used … but obsidian projectile points were adopted” by the Olmec in 1150 BC. “These large obsidian points produced spears superior to wooden ones in that both points and long cutting edges could be used to slash and puncture rather than simply be thrown.” Hassig, War and Society, 15. Naturally, obsidian points were used for other projectiles (such as darts and arrows) as well. A “sharp pointed arrow” may thus be a reference to an obsidian pointed projectile, versus wooden-tipped projectiles which had more limited use and effectiveness.

[14] Elder M. Russell Ballard recently taught, “It is important that you know the content of [the Gospel Topics] essays,” and also stressed, “You should also become familiar with the Joseph Smith Papers website, the Church history section on LDS.org, and other resources by faithful LDS scholars.” Elder M. Russell Ballard, “By Study and By Faith,” Ensign, December 2016, 26.