Were Joseph Smith’s Translation Instruments Like the Israelite Urim and Thummim? | Meridian Magazine 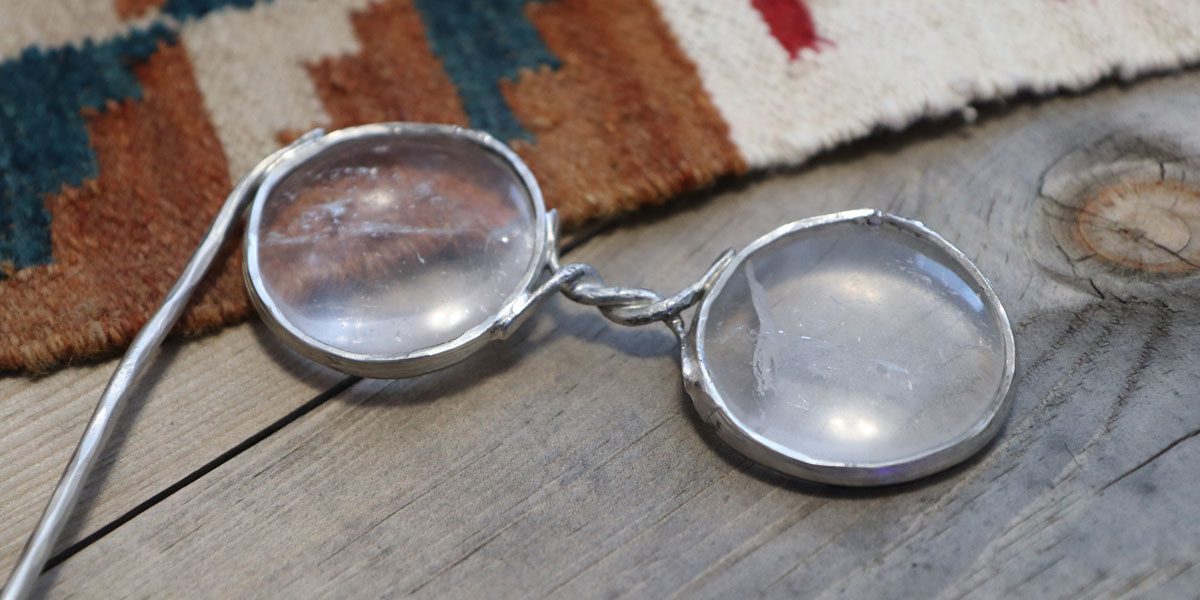 Were Joseph Smith’s Translation Instruments Like the Israelite Urim and Thummim?

“And now, my son, these interpreters were prepared that the word of God might be fulfilled.”
Alma 37:24

When Joseph Smith was entrusted with the golden plates, he was also given a set of Nephite interpreters and a breastplate.[1] Over the course of the Book of Mormon’s translation, Joseph apparently made use of several different media—small stones or lenses—to enable his spiritual vision of the text. Initially, in 1828, he utilized the Nephite interpreters, which he described as “two transparent stones set in the rim of a bow fastened to a breastplate.”[2]

William Smith, Joseph’s younger brother, was reported in 1921 as saying that the stones were connected to a rod that could be attached to the breastplate and used like a pair of spectacles.[3] For convenience, however, Joseph may soon have removed one of these stones from its holder and placed it in a hat in order to shield it from ambient light as he looked upon it. On other occasions, he apparently used what has come to be called his seer stone.[4]

Figure 2 Replicas of the gold plates and breastplate with the Urim and Thummim. Replicas by David Baird, Photograph by Daniel Smith.

When the 116 pages of the book of Lehi were lost in July 1828, the plates and the interpreters were taken back by the angel Moroni. But then in September, 1828, Moroni returned them to Joseph.[5] He commenced translating again in earnest two days after Oliver Cowdery arrived on April 5, 1829. After the translation was finished, the plates and interpreters were returned again to Moroni, who showed them to the Three Witnesses.

In 1848, Oliver testified, “I beheld with my eyes and handled with my hands the gold plates from which it was translated. I also beheld the Interpreters. That book is true.”[6] On August 31, 1829, an article appeared in the Palmyra Freeman, reprinted in the Rochester Advertiser, apparently quoting Joseph himself: “By placing the spectacles in a hat, and looking into it, Smith could (he said so, at least,) interpret these characters.”[7] Joseph declined to explain the translation process except to say repeatedly that it was accomplished by the gift and power of God.[8]

Whatever the particular details may have been, it is clear that the breastplate and interpreters were linked artifacts and that they were prepared for the purpose of translation.[9] Soon, the early Saints recognized that Joseph’s translation instruments were similar to the Urim and Thummim from the Old Testament, and they began to interchangeably refer to them by this biblical term.[10] Joseph himself referred to them as the “Urim and Thummim” as early as 1836.[11] Some may wonder, though, how closely and in what ways Joseph’s New World artifacts were related to their Old World counterpart?

As far as the Bible itself is concerned, there is clear evidence that the Urim and Thummim was associated with a ceremonial breastplate worn by the high priest in ancient Israel. From Exodus 28:30, we learn that the Urim and Thummim was supposed to be put “in the breastplate of judgment”[12] and that it would be “upon Aaron’s heart, when he goeth in before the Lord.”

Figure 4 A replica of the Biblical Urim and Thummim as a form of casting lots of “yes” or “no.” Image via ekacquah.me

Biblical scholar Cornelis Van Dam has argued that although the evidence isn’t conclusive, there are good reasons to suspect that the breastplate was “designed to provide a pouch in which the [Urim and Thummim] … could be kept.”[13] This nicely corresponds with William’s description that a “pocket was prepared in the [Nephite] breastplate on the left side, immediately over the heart. When not in use the [interpreters were] placed in this pocket, the rod being of just the right length to allow it to be so deposited.”[14]

Most biblical scholars over the past few centuries have believed that the Urim and Thummim was “used merely to obtain a yes or no answer, similar to casting lots.”[15] Yet Van Dam has argued that there “was something very lively and direct”[16] about the Urim and Thummim’s revelatory process and that “[p]rophetic inspiration is the only revelatory means that is known that can adequately account for the complexity and subtlety of some of the answers received.”[17] Similarly, Joseph Smith was able to receive detailed revelations from the Lord through the Nephite interpreters. Several early revelations in the Doctrine and Covenants were received in this manner.[18]

The terms Urim and Thummim possibly mean “light(s)” and “perfection(s).”[19] A number of sources indicate that the divine object to which they referred was associated with a sacred name and that its revelatory power was facilitated by gemstones, light, and even illuminated letters.[20] For instance, in discussing Exodus 28:30, Targum Pseudo-Jonathan states that “you shall put into the breastplate the Urim, which illuminate their words and make manifest the hidden things of the House of Israel.”[21]

According to Van Dam,

Ramban suggested that certain letters of the breastpiece lit up, and that lighted letters would then need to be arranged correctly by the high priest. The Zohar took this notion a step further, mentioning that the face of the high priest shone if the luminous letters conveyed a favorable message. The interpretation of [Urim and Thummim] as shining protruding letters is also found in Christian interpretation.[22]

Figure 3 Illustration of the Israelite High Priest holding the Urim and Thummim. Image via Bluberry Star.

These various understandings correspond well with accounts of Joseph’s translation method. When asked what appeared to Joseph Smith’s view during the translation process, David Whitmer explained that Joseph would see “what appeared like an oblong piece of parchment, on which the hieroglyphics would appear, and also the translation in the English language, all appearing in bright luminous letters.”[23] On other occasions he referred to them as “letters of fire”[24] and said that the “letters appeared on [the stone] in light.”[25] Joseph Knight said that words looked like “bright Roman letters.”[26]

There will likely continue to be scholarly debates about what the biblical Urim and Thummim was and how it functioned. Yet non-LDS scholars such as Van Dam have fairly recently been reaching conclusions that strengthen the possible links between the Urim and Thummim and Joseph Smith’s translation instruments.[27] Joseph and the early Latter-day Saints, therefore, were certainly not incorrect to make this association themselves.

It should be noted, however, that Joseph’s conception of a Urim and Thummim was fairly broad. He taught that the “place where God resides is a great Urim and Thummim” and that “this earth, in its sanctified and immortal state, will be made like unto crystal and will be a Urim and Thummim to the inhabitants who dwell thereon” (Doctrine and Covenants 130:9). Moreover, he said the “white stone mentioned in Revelation 2:17, will become a Urim and Thummim to each individual who receives one …. And a white stone is given to each of those who come into the celestial kingdom, whereon is a new name written, which no man knoweth save he that receiveth it. The new name is the key word” (Doctrine & Covenants 130:10).

Thus, there is no reason to expect there to be a one-to-one relationship between every aspect of Joseph Smith’s translation instruments and the biblical Urim and Thummim. Each was associated with gemstones, a breastplate, light, illuminating letters, a sacred name, and prophetic revelation.[28] And yet the meaning of the name, the nature of the letters, the method of illumination, the features of the breastplate, the appearance of the gemstones, and the specific revelations were all different.[29] This shows how God often communicates to his prophets in similar, yet not exactly the same, ways. As Nephi declared, God speaks “unto men according to their language, unto their understanding” (2 Nephi 31:3).[30]

Alma prophesied that the Lord’s servant would obtain “a stone, which shall shine forth in darkness” (Alma 37:23), and that he would also obtain the Nephite interpreters which would “bring forth [ancient records] out of darkness unto light” (v. 25). Surely, this servant was Joseph Smith, who variously used the Nephite interpreters as well as a seer stone to translate the Book of Mormon by the gift and power God.

While Joseph’s instruments were different in some respects with what is known about the biblical Urim and Thummim, these sacred cousins are certainly similar enough to be called by the same name. Each of them helped the “word of God … shine forth out of darkness, and come unto the knowledge of the people” (Mormon 8:16).

Roger Nicholson, “The Spectacles, the Stone, the Hat, and the Book: A Twenty-first Century Believer’s View of the Book of Mormon Translation,” Interpreter: A Journal of Mormon Scripture 5 (2013): 136–139.

[4] On about July 1, 1830, Joseph was tried a final time in Broome County, New York, on charges of being a disorderly person. As on previous occasions, he was once again acquitted, this time because there was convincing testimony that Joseph had not looked “in the glass within the space of two years last past.” This would mean that he had not used whichever glass (seer stone) was in question between July 1828 and the end of June 1830. See Gordon A. Madsen, “Being Acquitted of a ‘Disorderly Person’ Charge in 1826,” in Sustaining the Law: Joseph Smith’s Legal Encounters, ed. Gordon A. Madsen, Jeffrey N. Walker and John W. Welch (Provo, UT: BYU Studies, 2014), 92, 464.

[5] According to David Whitmer, when Joseph was again permitted to translate, he “was given by the angel a Urim and Thummim of another pattern, it being shaped in oval or kidney form.” See Welch, “The Miraculous Timing,” 173, doc. 95. For more on the possible distinctions among Joseph Smith’s translation instruments, see Michael Hubbard MacKay and Nicholas J. Frederick, Joseph Smith’s Seer Stones (Salt Lake City and Provo, UT: Deseret Book and Religious Studies Center, Brigham young University, 2016).

[10] See Roger Nicholson, “The Spectacles, the Stone, the Hat, and the Book: A Twenty-first Century Believer’s View of the Book of Mormon Translation,” Interpreter: A Journal of Mormon Scripture 5 (2013): 136–139.

[14] Peterson and Pender, interview of William Smith, 7, as cited in MacKay and Dirkmaat, From Darkness unto Light, 89.

[19] Although there is no scholarly consensus on the etymology of these words, Van Dam has argued that “light(s)” and “perfection(s)” is likely their meaning in the Masoretic Text of the Bible. Van Dam, The Urim and Thummim, 136.

[29] It should also be noted that the truthfulness and accuracy of these ancient sources describing the biblical Urim and Thummim is questionable. Their correspondences with Joseph Smith’s translation instruments and methods are intriguing, but this alone doesn’t necessarily establish them as valid.