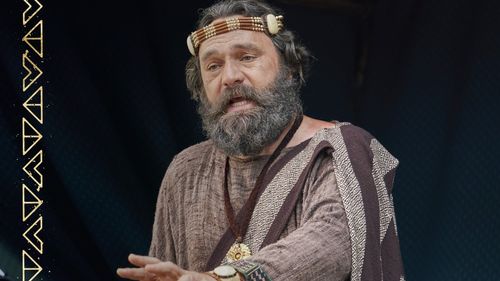 Was King Benjamin Joking about Parenting?

King Benjamin keeps surprising us. Sure, he said some things about parenting that we expected:

And ye will not suffer your children that they go hungry, or naked; (Mosiah 4:14)

That is no surprise. But then he said things that made you wonder if he ever had children:

neither will ye suffer that they transgress the laws of God, and fight and quarrel one with another, (Mosiah 4:14)

Zero-tolerance for quarreling??? Benjamin had three sons and presumably some daughters and he thought it was realistic to allow no quarreling? Is such contention-free family life even possible? He seemed to think so; he equated contention with serving the devil:

neither will ye suffer that they transgress the laws of God, and fight and quarrel one with another, and serve the devil, who is the master of sin, (Mosiah 4:14)

Have your children ever quarreled with each other? Have they ever argued, fussed, blamed, threatened, and shoved each other? King Benjamin recommended something quite different.

Love and serve one another? If a person didn’t know King Benjamin, they might think that he spent too much time in the throne room and not enough time in the family room.

I have thought a lot about my good dad’s efforts to teach his children to love and serve each other. It hurt him when any of his seven children were contentious—especially with their siblings. He himself was a man of peace. He made real efforts to understand others’ points of view—and he hoped that we would do the same.

He was disappointed a lot. I remember an encounter between me and my just-younger brother, Alan. As I remember the incident, I was working carefully at my desk in our shared bedroom building a model airplane. It was delicate work. As I was carefully gluing a strut in place, Alan barged into the room throwing a ball around. I expressed my displeasure to Alan. It probably sounded something like, “Alan, you idiot! Can’t you see that I am building a model here? This isn’t Vic Tanny’s Gym. Take the ball outside before you destroy all of civilization!”

I should tell you a couple of things about Alan. He is both a fun-loving and a sensitive guy. My approach did not account for either quality. So, he did not feel good about my instruction. I suspect that he was hurt by his older brother’s harshness. He probably protested something like, “This is my room too! I have as much right to be here as you do.”

The discussion continued through several rounds. Dad, at the far end of the house, heard our deliberations and decided to participate. When Dad arrived at the scene of our negotiations, he asked the question, “Boys, who started this?”

A person might be tempted to laugh at my dad’s question! How many times in the history of the world has a child ever responded to such a question by confessing, “Father, it was I. I began this argument. I should be held accountable.”?

Well, maybe no one else in the history of the world would have confessed, but my dad would have. Dad had immense humility and unfailing integrity. So, for him, the question was a reasonable one. He readily confessed his rare wrongs. He even apologized for the ways he may have inadvertently caused harm.

But, because Alan and I were less humble and far more combative, the probability that either of us would take responsibility was smaller than the chance that we would sprout wings and fly. That wasn’t likely.

Usually when dad arrived, I would seize the opportunity to control the narrative. “Dad, I am trying to study and build things in here and Alan throws the ball around and makes it impossible to work. This is not a gym!” I knew that my dad loved productive labor.

Alan might whimper, “That’s not fair. I just came in the room and Wally chewed me out. I should be able to come into my room without being insulted.”

We were doing just has been done since the time of Cain—playing innocent and blaming someone else. We were not walking in King Benjamin’s “truth and soberness.”

There are ways to make people move farther and farther apart. And there are ways to bring them closer. Dad might have asked a different question—one that skipped blame and focused on solutions—one that was better suited for our combative personalities. He might have addressed me, “Wally, I know that you like to work on your projects. I honor you for that. I’m proud of you. And I wonder if you understand what Alan is wanting.”

Instead of inviting me to blame, Dad would be inviting me to understand. My instinctive response would still be to blame, but Dad might coach me toward understanding. With some coaching, I might acknowledge: “I guess Alan wants to feel at home in his own room. And he might like it if I treat him like a brother I love.” When I finally showed signs of understanding Alan, Dad might ask, “Do you feel like you can help Alan with that?” Instead of rewarding my talent for blaming, Dad might have invited me to be compassionate.

Dad might have done the same with Alan. He might appreciate Alan’s sports ability and his gusto. Then he might invite him to understand my need. And he might invite Alan to act with sensitivity to my objectives.

The reality is our children will be inclined to fight and quarrel with one another. As parents, we can react with exasperation, seek to assign blame, ladle out punishment, and order them to stop. That is guaranteed to make relationships worse and resentments enduring. Or we can teach them. We can model for them how to resolve disagreements with compassion and problem solving. We can show appreciation for each child. We can invite perspective-taking and patience. In the process, we teach them to love and serve each other.

It turns out that King Benjamin was brilliant.

Invitation: Learn how the gospel of Jesus Christ combines with good research to chart a path of personal happiness and family effectiveness. My latest book, Discoveries: Essential Truths for Relationships, is available at Latter-day Saint booksellers or Amazon. Get a copy for you or for someone you love.

Thanks to Barbara Keil for her editorial suggestions for this article.

Brother Goddard--I love your suggestion of validating the feelings of each child and then asking compassionate questions to help our children think about what the other person wants or is feeling. Blaming only makes everyone defensive and strengthens the barriers that already exist. Helping our children to learn to get along by inviting them to take an active part in solving their differences is a golden key. Sometimes we are too quick to deal out punishment, rather than to use these situations as learning experiences.

Excellent article. Motivated by King Benjamin, I decided as a young father to also implement a zero tolerance for contention with our children. My technique for handling quarrels was to put both children on chairs in the middle of the living room and tell them they had to stay there until they came up with a solution to their problem that was satisfactory to each child. It worked magic. But, a word of caution - for this technique to be successful, you have to have a reputation with your children that they know you absolutely mean what you say, otherwise they will wait you out until you give up and let them go without solving the problem.