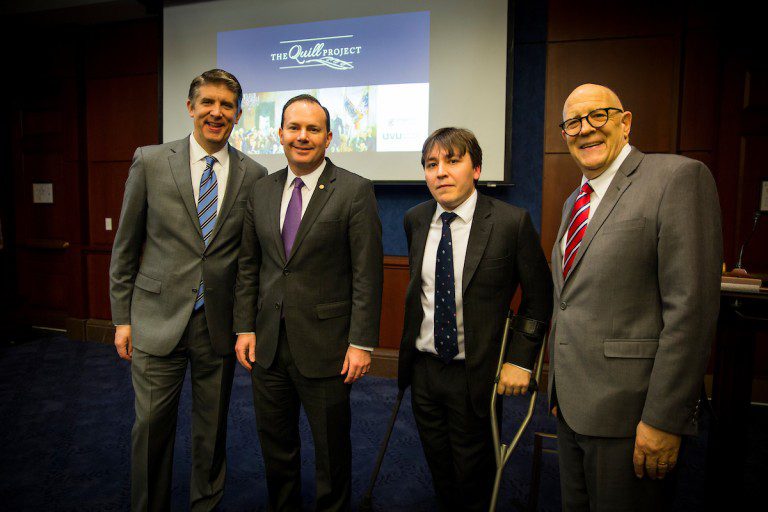 Cover image: (from left) UVU President Matthew S. Holland,Utah Senator Mike Lee, Nicholas Cole of Oxford University, Rod Smith of the UVU Center for Constitutional Studies prior to the start of event as “The Quill Project” is unveiled at the U.S. Capitol in Washington.

Washington, D.C. — In partnership with Pembroke College at the University of Oxford, Utah Valley University (UVU) announced today the launch of the Quill Project, www.quillproject.net, a groundbreaking new research platform that recreates in its entirety the original context of historic negotiated texts such as constitutions, treaties, and legislation. The presentation of the complete known records of the Constitutional Convention of 1787 that resulted in the United States Constitution is its flagship project. The official launch and a demonstration of the platform will be conducted today at the U.S. Capitol Building in Washington, with participation by Utah Senator Mike Lee. The unveiling can be watched online at facebook.com/UtahValleyUniversity.

“I am immensely proud of our students’ contribution to this remarkable, even historic project, which provides a significant learning tool to everyday students as well as scholars looking to delve more deeply into negotiated texts,” said Matthew Holland, president of UVU. “We have been honored to work with such an esteemed institution as Pembroke College in bringing this platform to the public. This collaboration by our Center for Constitutional Studies beautifully illustrates our defining commitment to engaged learning, which immerses students in real-world activities outside the classroom to increase professional competence and confidence.”

UVU President Matthew S. Holland speaks as “The Quill Project” is unveiled at the U.S. Capitol in Washington.

Created by Dr. Nicholas Cole of Pembroke College at the University of Oxford, with significant research conducted by students at Pembroke College and at Utah Valley University’s Center for Constitutional Studies, the Quill Project gives people a way to visualize the complexity involved in creating a negotiated text such as the U.S. Constitution, recreating what it was like to be present in the room and witness what was being discussed at the time of the text’s creation. Using bespoke software, the Quill Project is able to capture and fully render the textual creation of these historic documents in an accessible way, showing how the drafting process informed and shaped the final document.

“Nearly every American is familiar with the basics of the U.S. Constitution, but few people understand the extensive negotiations behind its making,” said Dr. Cole, a senior research fellow at Pembroke College. “Thanks to a unique collaboration with the students at UVU’s Center for Constitutional Studies, we’ve been able to provide some much-needed insight and context into what went on during the Constitutional Convention, and how it led to the historic document we know today. We look forward to working with the UVU team on further projects exploring the basis of American Constitutional Law.”

A comprehensive, first-of-its kind research tool, the Quill Project aims to increase constitutional literacy for everyone, as well as provide deeper insights for constitutional scholars by providing a sweeping and in-depth look at the many documents, discussions and proposals that led to the creation of the U.S. Constitution.

“The study of the Constitution is highly personal for me and my family as my late father was the Solicitor General of the United States under President Reagan and my brother is a sitting supreme court justice on the Utah Supreme Court,” said Senator Lee. “I highly commend this unique transatlantic partnership between our great Utah Valley University and the world’s most famous and established institution of higher education, Oxford University. I believe the Quill Project can play a significant role in improving constitutional literacy across the world.”

Utah Senator Mike Lee speaks as “The Quill Project” is unveiled at the U.S. Capitol in Washington.

A variety of other projects for Quill are planned or in progress. Currently, a group of UVU’s constitutional studies students is researching the presentation of the Salt Lake Convention 1895 records, which led to the creation of the Utah Constitution.

About the Quill Project

Quill is a platform for the study of negotiated texts that emphasizes the recreation, as closely as possible, of the original context within which decisions were made.

The platform models formal negotiations, and is applicable to a wide variety of processes, including legislative and quasi-parliamentary processes. Quill provides a variety of innovative tools for readers and editors, as well as links to material hosted on other platforms.

At 37,282 students and growing, Utah Valley University is the largest public university in the state of Utah and one of a few higher education institutions in the nation offering a dual-mission model that combines the rigor and richness of a first-rate teaching university with the openness and vocational programs of a community college. UVU’s unique model—which focuses on student success, engaged learning, rigorous academic programs, and faculty-mentored research—is transforming higher education by making it more affordable and accessible to students of all backgrounds.

About Pembroke College at the University of Oxford

Oxford, with its origins in the Twelfth Century, is the oldest British university and has for centuries been an internationally renowned center of learning. From the early days of the University, Broadgates Hall, from which Pembroke College was founded, existed as a hostel for law students. The combined generosity of an Abingdon merchant and a Berkshire clergyman provided the necessary endowment for the transformation of Broadgates Hall into Pembroke College, named after the third Earl of Pembroke, Lord Chamberlain and Chancellor of the University, who had done much to promote the foundation.

Originally intended to provide places at Oxford for boys from Abingdon School, Pembroke was founded in 1624 to serve the common good through the promotion of scholarship and research. Pembroke College is a lively and ambitious intellectual community where students and academics alike are passionate about their subjects. The student body is made up of 375 undergraduates, around 35 visiting students on their Junior Year Abroad from U.S. and Chinese universities, and more than 283 postgraduates.

With a dynamic research community, the College is proud to house several research groups and is committed to the tutorial system of undergraduate teaching with subject tutors here covering a wide range of disciplines.  Pembroke Fellows are supported in their teaching by a team of College lecturers and the College is also home to a group of 24 Research Fellows and 20 Associates.

Hey there - just a note - this wasn't the launch of Quill. It was launched at Oxford in 2016. But it was the launch of a new level of partnership between UVU and Quill, wherein UVU will undertake to fund Quill for four years and Quill will run a summer program for UVU students and continue to work with them in developing Quill content. You can listen to a conference both UVU and Quill participated in at the Palace of Versailles last September that I ran here: www.libertascc.com/tours