"Unto Us This Day": Remembering the Nephites at Christmas | Meridian Magazine 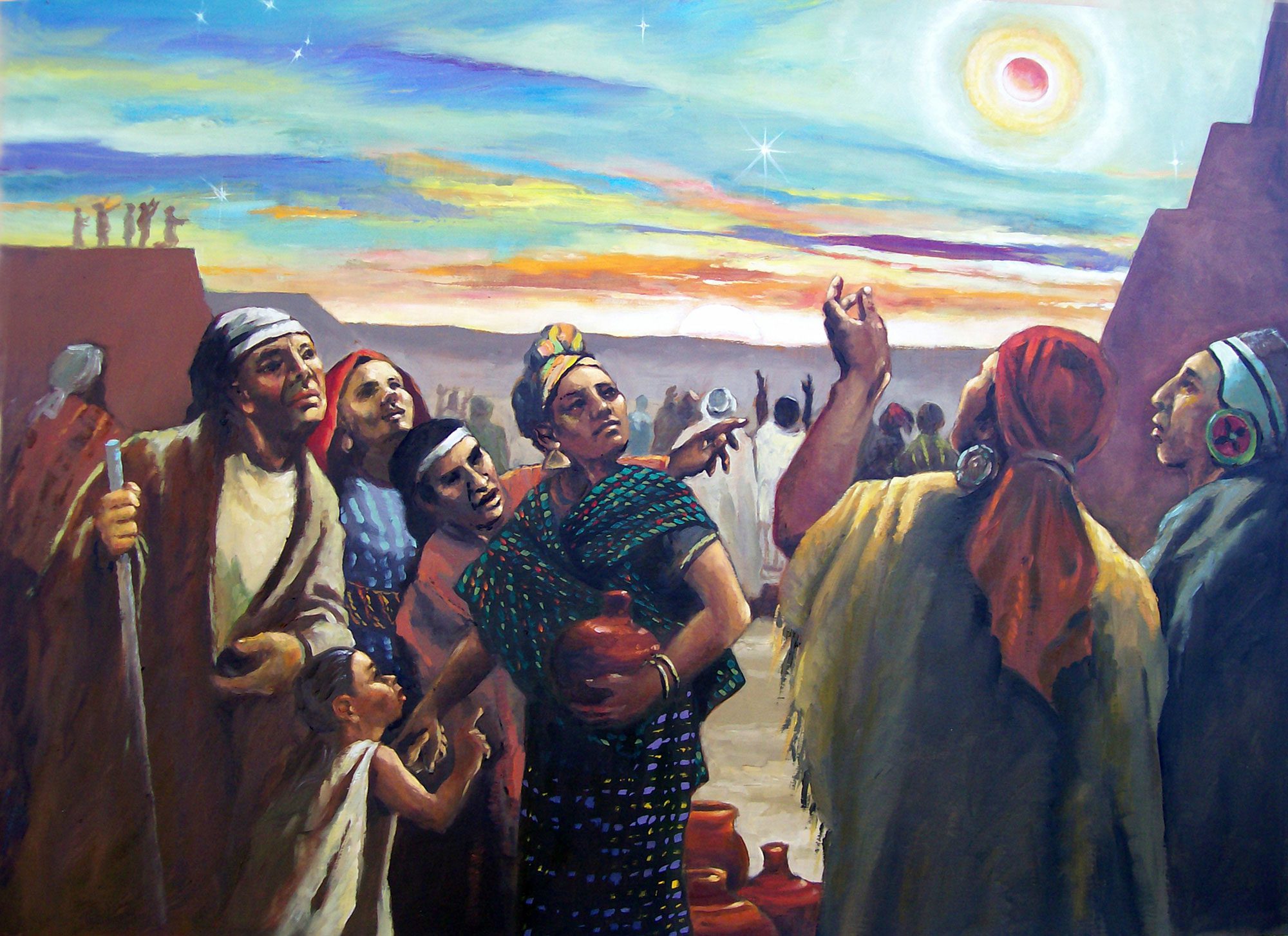 “Unto Us This Day”: Remembering the Nephites at Christmas

Editor’s Note: The following is a fictional story based on the events in Helaman and 3 Nephi. It is written by LaFond P. Hall with additional revisions by Robert Starling.

Most Christmas stories center around the blessed events in Bethlehem, and the birth of the Christ child. But there were also believers in the New World, in ancient America, who were anxiously awaiting a sign in the heavens that would tell them that Jesus was born, and it would literally save their lives. Later in John 10:16 He spoke of these “other sheep” who would someday hear His voice. Their story is equally as important at this time of year.

It was late afternoon of a bright, golden day as eight-year-old Oman ran sobbing into his grandfather’s small cottage on the outskirts of the great city Zarahemla. His small body shook as he threw his arms around the old man’s neck.

“What is it, little one? What troubles you so?”

“There, there, lad. Don’t say such things. Prayer is always worthwhile.” He comforted the little boy and held him close until his crying ceased.

“Grandpa, tell me once again what Samuel said. Are you sure he was telling the truth? After all, he was a Lamanite, wasn’t he?

Amner smiled. “Yes, he was a Lamanite; but he was also a prophet. And he was telling the truth. He said many things, my boy. He scolded the people for their wickedness, and reminded them of their many blessings. And he promised us that in about five years time Jesus would be born in Jerusalem. When that happens we will know it in our land because there will be a night when there is no darkness, and a new star will also appear.”

“Oh, I want to believe Grandpa, I truly want to. But tomorrow we’ll all be killed unless we reject those words of Samuel. And I, I…, –His voice broke. After a moment he continued quietly, “My friend Zanoh and all his family had their names taken from the records of the Church this morning. The family of Landi did the same thing yesterday.

“Is that what you want, little one?”

“Oh, no! I was just barely baptized last summer. But…” He hesitated, “but I did talk
about it. My father spoke with my mother about it, too. They’ve agreed to face execution before they deny the faith. But they told me that I must choose for myself.”

“That’s good, my boy. They’re wise. Samuel also said, “Behold ye are free. Ye are permitted to act for yourselves, for behold, God hath given unto you a knowledge and he hath made you free.” You’re at the age of accountability lad; no one can decide for you.”

“Grandpa, Samuel wasn’t the only one who said there would be a Christ, was he?

“No indeed. All of our fathers from the days of our ancestor Lehi have spoken of Christ. And before Lehi’s time the prophets of old told of His coming. The Plates of Brass contain many such prophecies. We know that he will be born near Jerusalem. We know that his mother will be beautiful virgin whose name is Mary. And we know that he will come soon, Oman, –very soon.”

“But will it be soon enough?” The little boy turned a tear-stained face toward his grandfather, pleading for reassurance. Will God save us tomorrow, Grandpa? Do you think he will?”

“I don’t know, Oman.” The old man brushed back an unruly lock of hair from the boy’s forehead. “For your sake and your family’s, I wish I could say yes. For me it doesn’t matter. I’ve lived my life.” He paused a moment,

“But he wouldn’t deny Christ!” There was pride in the youngster’s voice as he continued, “And the people that believed Alma in Ammonihah wouldn’t deny either, would they?”

No, Oman, they would not deny.”

The youngster sat quietly for a time, studying the shape of his sandal. Suddenly he said, …”Why did God let the wicked men kill them?”

The old Nephite, had been expecting this question.

“Because it was not just to the righteous that God said, “ye are permitted to choose for yourselves”. If we could only choose righteousness, that would be no choice, at all. ”

“Grandfather,” Oman stood up. “I’m going home now. Mother will be worried if I stay here until the darkness comes. I know now what I should do. I’m pretty scared, but I… but when the rulers take the church records tomorrow, my name will be listed there in the same column with yours and Father’s and Mother’s.

“I’m proud of you, Son”. Amner reached for his gnarled cane and got to his feet. “It would be hard for me to walk to your home tomorrow morning, but ask your father to bring the family here . Let us be together as we wait for the soldiers to come.” He patted the blond head of his grandson and told him goodbye.

The little boy stepped out into the twilight. But what a curious, luminous, beautiful kind of twilight it was! The sun had gone down to be sure, and there was a rosy glow above the western mountains where it had disappeared.

But behind the mountains to the north and the jungle to the south, the sky was bright with a blue white light. Oman turned quickly to look at the city of Zarahemla. It was not in shadows as it should have been by now, but curiously light. It was almost like noonday, yet… unexplainably different. There were no shadows anywhere, and the source of light seemed to be everywhere, –and yet nowhere.

Amner stepped outside his cottage, and for a long moment he looked around him. He placed his hands on the boy’s shoulders and spoke gently.

“There is no moon tonight, dear boy, and the sun has already gone to rest. But I don’t think your mother will be concerned. You see, there will be no darkness tonight.

“For unto us is born this day in the city of David a Savior, which is Christ the Lord.”

Since the last night, i read the 11 articles as a bonus and enjoy all of them...it helps to practice my English but much more to shape my mind and definitely emphasized and tune-up a part of my spirituality...thank you for the daily nourishment of Meridian...