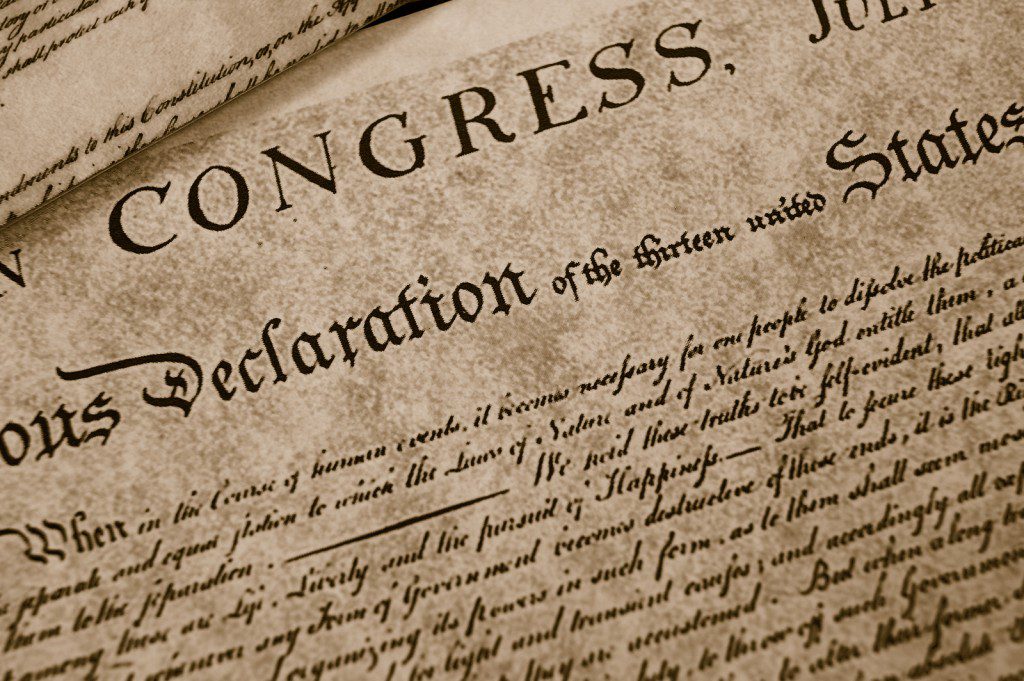 It is a fairly rare occurrence when a significant document is published to the world over the personal signatures of a number of persons.

In this document, they bore solemn testimony of “the reality of His matchless life and the infinite virtue of His great atoning sacrifice.” Their testimony continued by proclaiming that “none other has had so profound an influence upon all who have lived and will yet live upon the earth” and “God be thanked for the matchless gift of His divine Son.”

We were particularly impressed by the signatures of these men who have covenanted to give the rest of their mortal lives to be special witnesses to the entire world of the name of Jesus Christ. Their personal signatures lend a magnificence to this document that no machine-produced letters could convey.

While pondering the great message of their testimony, we also reflect on another historic document, similarly attested by the signatures of heroic men—the Declaration of Independence of the United States of America, issued to the world on July 4, 1776.

For just over a year, starting in 1775, conflict had raged between England and the thirteen colonies in America. After a stunning victory over the British forces at Boston in March 1776, the continental army had moved to New York, the site of the next anticipated battle. The most powerful nation in the world at that time, England had significantly strengthened its own forces, and recruited foreign mercenaries to join its armies. In late June, the English fleet dropped anchor at Long Island. The number of ships, with their armaments and soldiers, was truly stunning to the ragtag revolutionary colonial army. “To a Pennsylvania rifleman closer at hand their masts looked like a forest of trimmed pine trees. ‘I declare that I thought all London was afloat.’”1

Despite the risks of fighting an overwhelmingly stronger adversary, the signers risked their lives and affixed their signatures to the Declaration of Independence in July of 1776. In his masterful historical sketch of that pivotal year, 1776, David McCullough writes, “By renouncing their allegiance to the King, the delegates at Philadelphia had committed treason and embarked on a course from which there could be no turning back.”2

The Declaration of Independence was a rigorous and spirited denunciation of the tyrannical power that forced its unrighteous control over a people. That control was universal, in every physical, mental and financial manner, and aimed to subjugate the colonists to their English overlords in every possible way.

Fifty-six brave men signed a response that declared their intent to be free from this tyranny. All citizens of the United States of America ever since have owed an enormous debt of gratitude to those signers for their courage and inspiration. The document they signed set in motion events leading to the creation of a nation with guaranteed constitutional liberties. Just forty-four years later, our Father in Heaven initiated the restoration of the gospel of Jesus Christ, when He and His Son Jesus Christ first appeared to the boy Joseph Smith in the western part of those original thirteen colonies.

Through the life and redemption of Jesus Christ, all mankind may be freed from two elements of Satan’s hoped-for tyranny. All will be freed from the clutches of physical death; all are promised the glorious resurrection of our physical bodies, to be reunited forever with our spirits. And all are promised that, through faith in Jesus Christ, repentance, and receiving all the saving ordinances of His gospel, we may be cleansed and saved through His sacrificial atonement. Only the Lord—the One who paid the ultimate price—can rescue us and set us at liberty from our universal enemy, sin. “If the Son therefore shall make you free, ye shall be free indeed” (John 8:36).

The signers of the Declaration of Independence came a second time to earth, because they needed liberty again. They came to Apostle Wilford Woodruff, president of the only House of the Lord then functioning in the world—the St. George Utah Temple—because he represented the only group of men who could authorize and effect their spiritual liberation and provide the saving ordinances whereby they could continue to prosper and progress in eternal matters.3

In August of 1877, Elder Woodruff received a dream or a vision from those Founding Fathers, the signers of Declaration of Independence. A short time later he said,

“Two weeks before I left St. George, the spirits of the dead gathered around me, wanting to know why we did not redeem them. Said they, ‘You have had the use of the Endowment House for a number of years, and yet nothing has ever been done for us. We laid the foundation of the government you now enjoy, and we never apostatized from it, but we remained true to it and were faithful to God.’

“These were the signers of the Declaration of Independence, and they waited on me for two days and two nights.”4

Elder Woodruff, the president of the St. George Temple, immediately went into the temple and was baptized by proxy for each of those eminent men, along with President George Washington.

Testifying of this unusual event in the April 1898 General Conference, Elder Woodruff, as president of the Church, testified of the role of these prominent historical figures:

“I am going to bear my testimony to this assembly, if I never do it again in my life, that those men who laid the foundation of this American government and signed the Declaration of Independence were the best spirits the God of heaven could find on the face of the earth. They were choice spirits, not wicked men. General Washington and all the men that labored for the purpose were inspired of the Lord.

“Another thing I am going to say here, because I have a right to say it.  Every one of those men that signed the Declaration of Independence, with General Washington, called upon me, as an Apostle of the Lord Jesus Christ, in the Temple at St. George, two consecutive nights, and demanded at my hands that I should go forth and attend to the ordinances of the House of God for them.  Men are here, I believe, that know of this, Brothers J. D. T. McAllister, David H. Cannon and James S. Bleak.  Brother McAllister baptized me for all those men, and then I told these brethren that it was their duty to go into the Temple and labor until they had got endowments for all of them.  They did it.  Would those spirits have called upon me, as an Elder in Israel, to perform that work if they had not been noble spirits before God?  They would not.”5

At their request and insistence, the glorious promises and blessings of the gospel of Jesus Christ were provided, through the sacred ordinances, to those who affixed their signatures to the Declaration of Independence, thus providing them spiritual liberty.

How wonderful it is that those who placed their handwritten signatures to these two great documents join in their testimony of the Savior and His power to provide independence.

Today’s world increasingly disregards and defames the name of Jesus Christ and His matchless gifts, freely offered to all humankind. By inscribing their individual signatures, the modern Apostles testify to the reality, for all people, of their declaration of independence from the powers of Satan through the life, acts, and teachings of Jesus Christ.

3 President Woodruff himself explained why the signers came to him, pleading that he would help redeem them: “The signers of the Declaration of Independence and the men that laid the foundation of this great American government know full well that there has not been a power on the earth where they could apply to have this principle carried out in their behalf, only the Apostles that held the keys of the kingdom of God in this generation. . . . [T]here was no other power on earth that could do it” (“Remarks Made at the Salt Lake Stake Conference Sunday, December 12th, 1897 by President Wilford Woodruff,” Deseret Evening News, December 18, 1897, 9). See Mackley, Wilford Woodruff’s Witness, 196.

Consult the following for additional material relating to the story of the Signers of the Declaration of Independence, their appearance in St. George, and their request for the saving ordinances:

Yorgason, Blaine M., Richard A. Schmutz, and Douglas D. Alder. All That Was Promised—The St. George Temple and the Unfolding of the Restoration. Salt Lake City: Deseret Book, 2013. See pages 303-311.

In Volume 7, page 369 of his journal, Wilford Woodruff recorded that a total of 5 men were ordained High Priests: two on August 22, one on August 23, and two on August 24. "22 WW Ordained 2 High Priest for George Washington and John Wesley, and 4 Elders." "23 W Woodruff ordained Brother Ellis Sanders a High Priest for Benjamin Franklin and got Endowments for him, also ordained 6 Elders." "24 W Woodruff Ordained 2 High Priest One for Christopher Columbus. Although Wilford does not record Horatio Nelson’s name in his journal, the temple record indicates James Godson Bleak acted as proxy and Wilford ordained him a High Priest on behalf of Horatio Nelson: So the five who were ordained high priests by proxy were: George Washington, John Wesley, Benjamin Franklin, Christopher Columbus, and Horatio Nelson.

I enjoyed the article, but would offer this one notation: the only signer of the Declaration of Independence who signed in July, and on the 4th, was John Hancock. The other 55 men who signed did not sign until August 2, 1776.