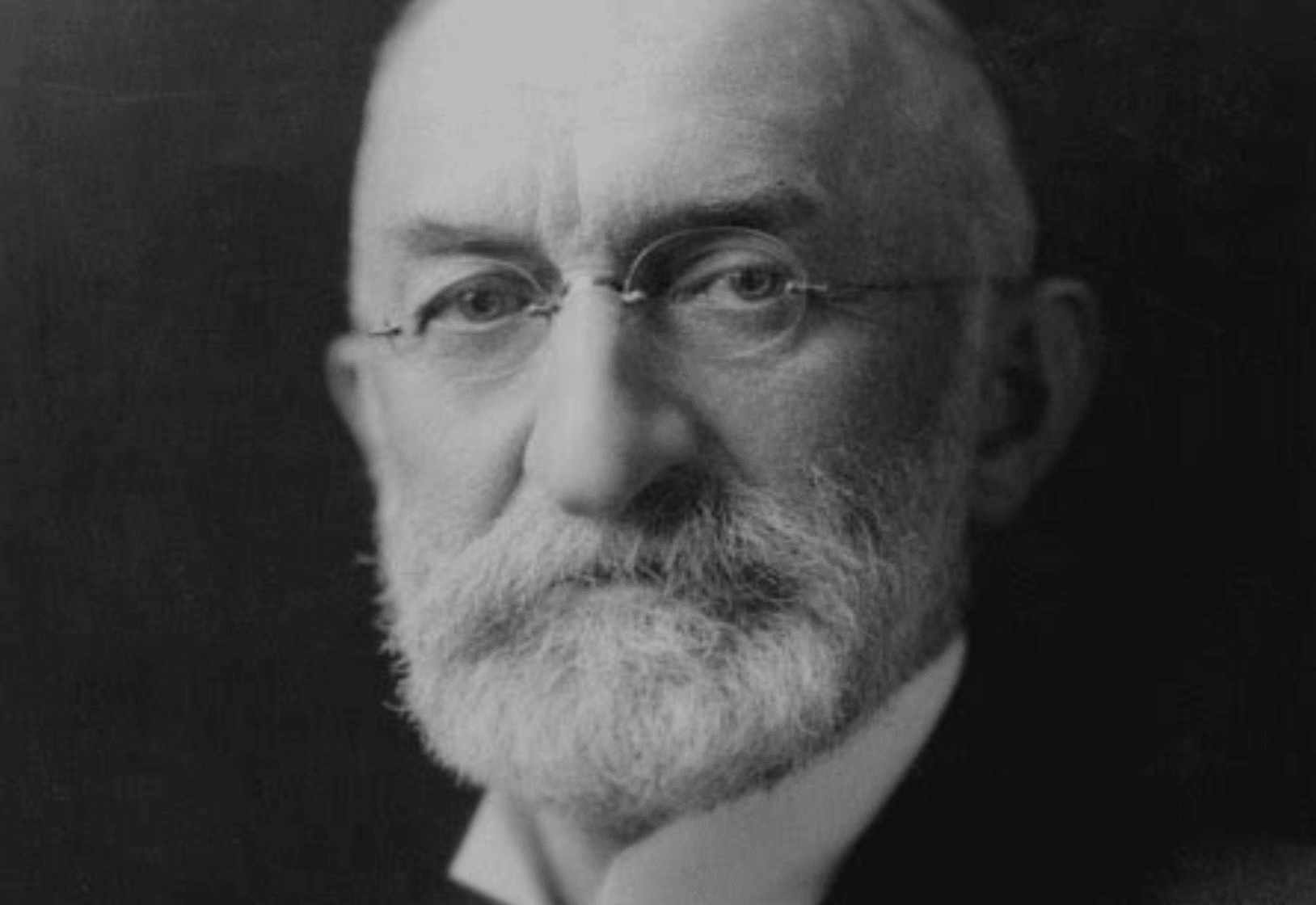 Heber J. Grant got things done. In fact, he got things done that people told him could not be done. His vocabulary did not include words like can’t or quit or impossible.

He often recited the words of Ralph Waldo Emerson:

“That which we persist in doing becomes easier to do, not that the nature of the thing has changed but that our power to do has increased.”

When Heber J. Grant was confronted with the need to do something difficult, his solution was to do it anyway, and to keep doing it until he could do it well. Tenacity is a word that brings to mind Heber J. Grant, who never seemed to understand that some things are impossible. Nothing could motivate him to endeavors of excellence like the allegation that there was something he could not do. There are wonderful lessons embedded in the story of his efforts to learn to sing.

Andrew Jenson wrote this of him: “He is passionately fond of music, and while nature does not seem to have specially intended him for a singer, his determination to learn to sing the songs of Zion is worthy of emulation, and his success in this line is an illustration of the truth that he who tries will conquer.” (LDS Biographical Encyclopedia, vol. 1, p. 149-150).

“President Grant believed in the principle of tenacity, of sticking to a goal until he achieved it. When he was a small child his mother tried to teach him how to sing, but failed because he could not carry a tune. When he was ten, a music instructor [Professor Charles J. Thomas] worked and worked with him, trying to teach him the simplest song and finally gave up in despair. At the age of twenty-six, when he was an apostle, he asked a Professor Sims if he could teach him how to sing. After listening to him, the professor replied, “Yes, you can learn to sing, but I would like to be forty miles away while you are doing it.” Even with all the teasing and ridicule President Grant never gave up. He practiced and practiced whenever he could get someone to listen and help him. Once, on a trip to Arizona with Elder Clawson and Elder Kimball, he asked them if he could sing one hundred songs on the way. They thought he was joking and said, “Fine, go right ahead.” After the first forty, they assured him if he sang the other sixty they would both have a nervous breakdown. He sang the other sixty. The most he ever practiced was four hundred songs in four days. He continued to practice and practice and improve until later in his life he began to lose his musical deafness and became a good singer” (Roderick L. Cameron: Grant Oratorical Contest, BYU Speeches, December 1, 1964, p. 3).

President Grant spoke often of his efforts and failures as he labored to develop his musical talents, an effort which someone said was no credit to him or to those required to listen.

“I have, all the days of my life, enjoyed singing very much. When I was a little boy ten years of age I joined a singing class, and the professor [Charles J. Thomas] told me that I could never learn to sing . . . I was practicing singing a few weeks ago in the Templeton building, and the room where I was doing so was next to that of a dentist. The people in the hall decided that someone was having his teeth extracted . . . I have practiced on the “Doxology” between three and four hundred times, and there are only four lines, and I cannot sing it yet . . . I tried to sing “O My Father” at Snowflake, Arizona, and I only got as far as the “O,” and I did not get that right . . . professor Heber S. Goddard is now teaching me to sing, “Who’s on the Lord’s side, Who?” I do not know how many months it will take him, but I propose to learn it someday, whether it takes six months or six years. When I do, if I get the opportunity, I will sing it here. I make these remarks because I feel that we ought to encourage our young people to learn to sing. From the standpoint of a singer, I have lost thirty?three years of my life. I was told when ten years old that I could never learn to sing. I did not learn until forty-three years of age, and I have spent four or five months trying to learn to sing the hymns, God Moves in a Mysterious Way,’ and O My Father’” (Heber J. Grant, Conference Report, April 1900, p.61).

Heber J. Grant had a great desire to learn to sing, but it was an uphill struggle for decades. All of his efforts between ages ten and thirty to sing ended in failure. A lesser manCalmost any other manCwould have capitulated and taken up knitting or fishing, but not Heber J. Grant. When he set out to do a thing, the best option of skeptics was to step out of the way and watch the exhibition. President Grant had a great desire to sing , “O My Father:”

“I remarked some four months ago to Brother Horace S. Ensign that I would be willing to spend four or five months of my spare time if I could only learn to sing that one hymn. He told me that anyone could learn to sing that had perseverance. I said to him if there was anything that I had it was perseverance. So I suggested that we sit down and I would take my first lesson of two hours on that song. I have been continuing the lessons on it ever since. I have sung it as high as 115 times in one day” (Conference Report, April 1900, p. 62).

This quality of character, this inflexibility of purpose, teaches a lesson to all of us that is worth almost any price to learn. The issue is never how hard something is, but how important it is. For Heber, singing was important! He tried to sing “O My Father” at a Sunday School Conference in the Tabernacle with 10,000 people in attendance (“How I Learned to Sing,” reprinted from In the Native American, p.3). He was afflicted with stage fright and did not have much success (“Learning to Sing,” p. 888). He apologized and then concluded his presentation with this observation:

“I then announced that I knew that I had not sung this hymn properly- the audience was laughing nearly all the time I was singing. But that I would sing it again and continue to sing it at future conferences until I could do so without making a mistake” (“How I Learned to Sing,” p. 3).

He said of the ridicule and criticism his singing engendered, “It only increases my determination to sing,” (“Learning to Sing,” pp. 887-888).

“When he was forty-three years of age, Elder Grant happened to be in a ward meetinghouse when he saw Professor Charles J. Thomas, the very music teacher who had told Elder Grant when he was a child that he would never learn to sing.  Elder Grant approached him and told him that at last he had indeed learned to sing. “I know I cannot run the scale: do, re, me, fa, sol, la, ti, do, because I tried it this identical morning for nearly an hour with my wife, and failed,” said Elder Grant, “but I can sing two songs.”

So Elder Grant set out to prove it:

“We walked over into one of the corners in the meeting house, and in a low voice I sang for him all six verses of “God Moves in a Mysterious Way His Wonders to Perform.” When I got through he remarked that he could not comprehend it, that I had not made a mistake of a single note. I assured him that I understood it and that I believed I had practiced the song not less than five thousand times before I learned it. He immediately requested me to join the Temple Choir, which he was leading at the time, and this I did and sang in his choir for a number of years.” (Joan Oviatt, “I Have Learned to Sing: President Heber J. Grant’s Struggle to Sing the Hymns of Zion,” Ensign, Sept. 1984, 43.)

I cannot help but wonder how many worthwhile things we would do “not less than five thousand times” in an effort to learn do them right.

Heber was finally able to say that he could sing over two hundred songs, a fact which gave him great pleasure. “I consider it one of the greatest accomplishments of my life that I have learned to sing.” (“How I Learned to Sing,” p. 5.)

There is no record that President Grant ever read the following quote from Emerson, but if he had or if he did, he would have believed it with all his heart.

“Whatever course you decide upon, there is always someone to tell you that you are wrong. There are always difficulties arising which tempt you to believe that your critics are right. To map out a course of action and follow it to an end requires courage.“