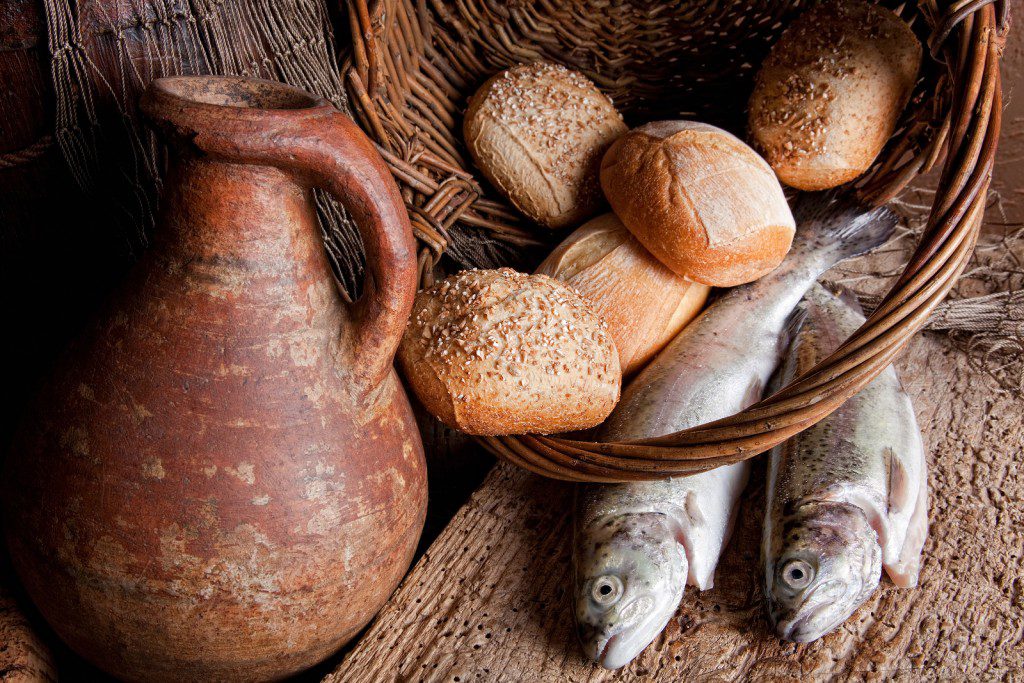 I have been thinking about the loaves and the fishes again. Why was it that among 5000 men, along with their women and children, only one lad thought to bring food? Were these people so anxious to be near the Master that food was an abstraction? Were they concerned that if they took the time to prepare a picnic basket they would miss the opportunity to hear him? Matthew 15 tells us a story similar to the feeding of the 5000, but which occurred later in his ministry.

Then Jesus called his disciples unto him, and said, I have compassion on the multitude, because they continue with me now three days, and have nothing to eat: and I will not send them away fasting, lest they faint in the way.

And his disciples say unto him, Whence should we have so much bread in the wilderness, as to fill so great a multitude? And Jesus saith unto them, How many loaves have ye? And they said, Seven, and a few little fishes.

And he commanded the multitude to sit down on the ground. And he took the seven loaves and the fishes, and gave thanks, and brake them, and gave to his disciples, and the disciples to the multitude. And they did all eat, and were filled: and they took up of the broken meat that was left seven baskets full. And they that did eat were four thousand men, beside women and children (Matthew 15:32 – 38).

These people had kept company with the Savior for three days, and had nothing to eat. Had they eaten all their provisions earlier? Or had they been fasting three days in order to be near him? Later the Savior criticized these people for following him for the food rather than his words or even his miracles (see John 6:26).

Even so, I am humbled by the observation that they stayed with him for three days. How much hunger would I be willing to risk to be near him? Would I have longing enough to be near him or faith enough in his ability to provide food to resist the temptation to skip off to McDonalds or Café Rio or Albertsons.

But the multiplication of the food is not the event that has caused me the most reflection on the nature of these and other miracles. All miracles by definition supercede natural law, of course, but some do so in ways that are not only miraculous but also incomprehensible. People who are sick or injured often get well without miraculous intervention. Even those who are pronounced dead have occasionally proven their doctors wrong. But when did anyone ever feed thousands all they could eat (see John 6:11,12) with five biscuits and two small fish?

The DVD Finding Faith in Christ pictures the astonishment of the disciples and the followers as the few pieces of bread and fish in the baskets feed multitudes. Even those who had witnessed the healings of previous days and places must have been in awe.

And what about the walking on the water? After some time with the Lord, followers probably became less and less impressed (see 2 N 2.:1) at the miraculous events associated with Jesus, but walking on water? How do you set aside the conviction that people are heavier than water and have a tendency to sink? How do you get water to support your weight and even the increased weight of Peter, who is clinging to your hand?

In another instance, Jesus changed the molecular structure of water so that it became wine. Good wine takes a while. You must plant the grapes, nourish and water them, harvest and de-juice them, prepare them, bottle them, and then–if you want good wine–let the resulting liquid age. The longer it ages, the better it is. The governor of the wedding feast described the wine Jesus had created in the waterpots as good wine, clearly better than the stuff served earlier. How does one make good wine in five minutes? One doesn’t, of course.

Similar observations might be made about the bread fed to the 5000 and the 4000. What steps are involved in making bread? You must first prepare and plow the soil, then plant the seeds, nourish and water them, care for the plants, harvest the grain, separate the chaff, grind the kernels, add other necessary ingredients, then allow the bread to rise, then bake it. Jesus filled baskets with bread and fish! Where did all that fish come from? The miraculous multiplication of animal products seems to me to be even more remarkable than the bread or the wine.

When Moses learned that the Lord intended to feed meat to millions of Israelites, he was dumbfounded. “And Moses said, The people, among whom I am, are six hundred thousand footmen (i.e. soldiers, to whom should be added women and kids and men too old or too young to bear arms); and thou hast said, I will give them flesh, that they may eat a whole month. Shall the flocks and the herds be slain for them, to suffice them? or shall all the fish of the sea be gathered together for them, to suffice them?” (Numbers 11:21-22).

But the Lord did send meat. Quail were stacked three feet high a half a mile in every direction all around the camp.

And the people stood up all that day, and all that night, and all the next day, and they gathered the quails: he that gathered least gathered ten homers: and they spread them all abroad for themselves round about the camp (Numbers 11:31-32).

The Bible Dictionary under Weights and Measures tells us that a homer is about 6-1/2 bushels. So the laziest Israelite had 65 bushels of quails. But how? . . . Did the Lord have a quail ranch by the Red Sea? Had he been growing quail for years in preparation for this miracle? Where did the birds (and the fish and the bread and the wine) come from? Of course I don’t know, and I suspect that no one this side of Kolob knows. Nor do we need to know. What we need to know is that divine help is available. No matter how desperate things are, there is Someone who can help, a being of absolute power and perfect love about whom things like this have been said:

*For with God nothing shall be impossible (Luke 1:37).

*With men this is impossible; but with God all things are possible” (Matthew 19:26).

*Ah Lord GOD! behold, thou hast made the heaven and the earth by thy great power and stretched out arm, and there is nothing too hard for thee . . . “(Jeremiah 32:17).

When we begin to believe in this aspect of the nature of the Son of God, we begin to lay the foundation for true faith. Cancer is no harder to cure than the common cold, and the Lord is as able to assist with a debt of millions of dollars as with a debt of hundreds. But faith is not the assurance that God will do what we want. Faith is the assurance that he will do what is best.

Sometimes he does not do it our way. Abinadi did not escape from his fire, nor James from the sword of Herod, nor Paul from Nero’s executioner. Life is a test.

In our pre-mortal life, we were instructed by Him as to the purpose of mortality: “We will make an earth whereon these may dwell; And we will prove them herewith, to see if they will do all things whatsoever the Lord their God shall command them.

So there we have it–it’s a test. The world is a testing place for mortal men and women. When we understand that it’s all a test, administered by our Heavenly Father, who wants us to trust in Him and to allow Him to help us, we can then see everything more clearly (Elder Dennis E. Simmons: CR, April 2004, Sunday AM).