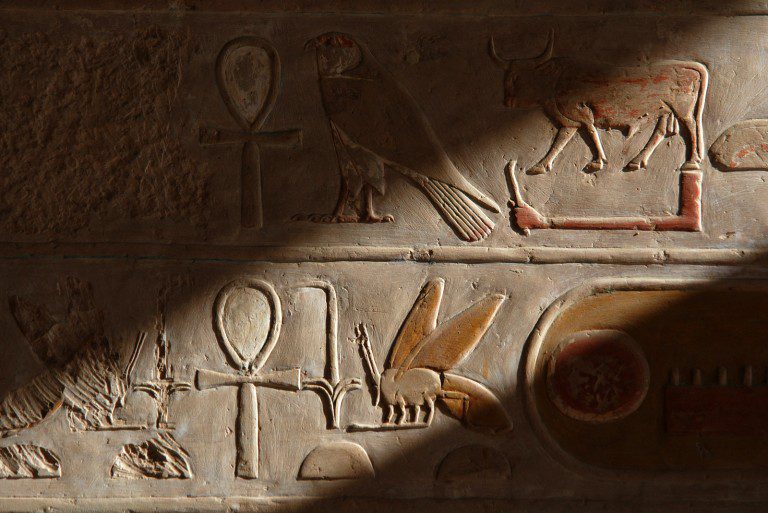 Joseph Smith was the first person in modern history to translate a complete book from ancient Egyptian hieroglyphic characters. The hieroglyphic Egyptian script was an extinct, dead language at the time of the Restoration. Even the Egyptians had lost the ability to read the hieroglyphics etched into their ageless temples and tombs. In fact, no one on earth could read the Egyptian markings on the famous Rosetta Stone (see photo below) when it was discovered in 1799, by Napoleon’s soldiers, in the Nile Delta at Rosetta, Egypt.

Egyptian hieroglyphic writing was an untranslatable, lost language—but the discovery of the Rosetta Stone, and the deciphering of its Egyptian characters in 1822, was the key that ultimately unlocked an understanding of ancient Egyptian. It took French scholars 20 years to translate one paragraph from the Rosetta Stone. At the same time, the Prophet Joseph Smith translated the 531-page Book of Mormon from ancient Egyptian characters—but he finished his translation in just two months.

The Prophet has never been recognized nor given academic credit for the miraculous feat of being not only the first person to translate an entire tome from ancient Egyptian hieroglyphics, but to complete the translation in so short a time. It was a miraculous achievement. It happened precisely as the Savior declared to Isaiah that it would—that the translation of the Book of Mormon would be a miracle, done by the Savior Himself: “I will proceed to do a marvelous work among this people, yea, a marvelous work and a wonder” (Isaiah 29:14 and 2 Ne. 27:26).

As mentioned, it took French scholars 20 years (1803-1822) to decode a single paragraph of the ancient Egyptian writing inscribed on the Rosetta Stone (the top third of the characters on the stone).

Here are some quick Wikipedia facts about the Rosetta Stone:

So, just after scholars had labored for twenty years to crack the Egyptian glyphs on the stone, the Prophet Joseph Smith was given a set of golden plates by the angel Moroni, similarly inscribed in Egyptian characters (see Mormon 9:32). Joseph received the plates on 22 September 1827, but due to a series of setbacks—losing the first 116 manuscript pages of translation by Martin Harris’s wife Lucy Harris; running out of paper; and moving from Palmyra, to Harmony, and then to Fayette; all the while evading persecution and mobs who were attempting to steal the plates—it wasn’t until 1829 when Joseph Smith was finally able to focus and translate what we know as the Book of Mormon.

Joseph Smith began translating the text on 7 April 1829 with the help of Oliver Cowdery. He averaged 7-10 translated pages per day. (That’s faster than most of us read the Book of Mormon!) He finished translating the entire book in late June 1829—in only 65 or less working days.

While translating, Joseph and Oliver were not afforded a quiet place in the halls of Academe, with access to scholars, libraries, and linguists. Yet, the translation moved at an astonishing pace. In fact, as modern scholars have noted, the translation occurred amidst severe challenges and some extraordinary circumstances: “Joseph and Oliver could not spend all of that time concentrating on the translation. They also took time to eat, to sleep, to seek employment (once, to work for money when supplies ran out), to receive the Aaronic and Melchizedek priesthoods, to make at least one (and possibly two) trips to Colesville thirty miles away, to convert and baptize Hyrum and Samuel Smith (who came to Harmony at that time), to receive and record thirteen revelations that are now sections of the Doctrine and Covenants, to move on buckboard from Harmony to Fayette, to acquire the Book of Mormon copyright, to preach a few days and baptize several people near Fayette, to experience manifestations with the Three and Eight Witnesses, and to begin making arrangements for the Book of Mormon’s publication.” (“How Long Did It Take to Translate the Book of Mormon?” by John Welch and Tim Rathbone, Reexploring the Book of Mormon, Provo, pages 1-8).

September 22, 2027, marks the 200th anniversary of when Moroni handed over the anciently engraved plates to the Prophet Joseph Smith. When we think of the miracle he accomplished in reading and translating ancient Egyptian glyphs to produce the Book of Mormon, we feel the same gratitude that Oliver Cowdery did, who was there, and witnessed the miraculous translation of the Egyptian record. He later wrote, “These were days never to be forgotten—to sit under the sound of a voice dictated by the inspiration of heaven, awakened the utmost gratitude of this bosom! Day after day I continued, uninterrupted, to write from his mouth, as he translated . . . the record called ‘The Book of Mormon’” (Joseph Smith—History 1:71). There is greater meaning than we sometimes think, when the Lord designated Joseph Smith as the presiding elder over all the Church, and as a “Prophet, Seer, Revelator, and Translator” in the Doctrine and Covenants (21:1; 107:02; 124:125). He was unique among his contemporaries, both in and out of the Church.

For those of you who would like to know more about the Book of Mormon characters that Joseph copied from the plates, I highly recommend "The 'Caractors' Document: New Light on an Early Transcription of the Book of Mormon Characters," Mormon Historical Studies, vol. 14, No. 1 -- by Michael Hubbard MacKay, Gerrit J. Dirkmaat, and Robin Scott Jenson, who are recognized LDS scholars with years of study of and/or direct involvement with the Joseph Smith Papers.