The Making of a Beautiful Nauvoo Photograph | Meridian Magazine 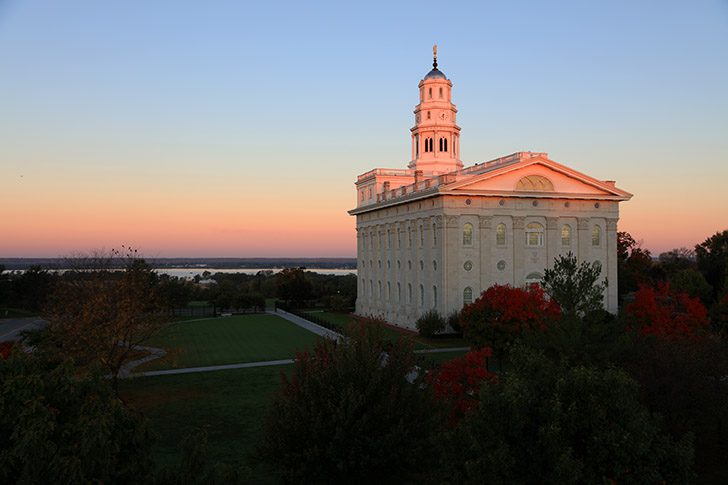 The Making of a Beautiful Nauvoo Photograph

Maurine and I had just finished leading our signature Church History Tour one fall and we had decided that I would return to Nauvoo to do some photography before flying home to Utah.  I drove back up from St. Louis and got into my room at the Nauvoo Hotel—an accommodation that has been there on Mulholland Street since the days of the Latter-day Saints in the Joseph Smith era. My plan was to shoot some amazing photographs each morning and evening in and around Nauvoo for the next four or five days.

I was especially interested in getting a high angle shot of the Nauvoo Temple, one that would include the Mississippi River to the west. I was desperate to find a way to do this. I talked to my cousin who works full time for the temple, knowing that he had access to some kind of hydraulic cherry-picker device.  He reluctantly declined to help, assuring me that he would if he could but this machinery was only used for washing the windows and doing outside maintenance on the temple.  He offered me a ladder, but I knew I needed to be at least 30 or 40 feet in the air.  What was I to do?

I was watching the weather and knew that I had to take this shot the very next morning.  I looked at the old Nauvoo State Bank building and thought, “If I could just get up on that roof, I could get the angle I need.”  The bank was closed and my various contacts and friends in Nauvoo thought that this was not going to be possible with such short notice. I often work in short-notice situations.

I went to my room that night and began downloading the images from that day and from the Church History tour. I put my SD card into my MacBook Pro and started organizing the images. I just knew there had to be a solution to my need to get that Nauvoo Temple shot. As I always do, I prayed that a way would be opened for me.

The next morning, I was up and out an hour before sunrise, back onto the challenge. I wanted to capture those first few seconds of morning light as it caused the temple to glow—but from that high angle. I grabbed my camera and tripod and walked down Mulholland to the area I had to keep exploring. I went around the back of the bank and the block of buildings there between Bluff and Page Streets. THERE! There was a staircase, like a fire escape, that went up the back of the building—but I needed to get even higher. I went up the frosty staircase and as I came to where I could not see—there was a vertical ladder that would lead to the top of the bank building!

You have to know; I have crossed razor wire fences in the Middle East to get the photos I need. I have climbed over gates and broken-glass-strewn fence tops to get the angles I need. This ladder was more like an invitation than a barrier. It was covered with frost, so I held on tight to my tripod with camera securely strapped around my chest. I made it to the top. This was the perfect angle. It was the perfect morning! I secured the camera onto the tripod and leveled it to perfection. Knowing that the sun was going to rise in a few minutes, I decided to take a few test shots and get my exposures just right. I went to shoot my first shot and as I tried to press the shutter, the screen read: NO CARD IN CAMERA. What?!  I had hurried out the door so fast that I had just taken the camera and tripod (no bag)—and I had left the active SD card in the computer from the download the night before! And my crisis was not going to slow the sunrise!

I left the camera set up on top of the building and ran across the frosty roof to head for the ladder. I shimmied down the ladder as fast as I could then down the fire escape stairs. I thought there was a small alley nearer the hotel so I ran along the north side of the buildings looking for the shortcut. Ah! There it was. I ran through the alley—feeling the pregnant light of the dawn. Into the hotel I burst and up the old, beautifully-carpeted stairs to head to my room. I turned the old lock as fast as I could and grabbed the SD card and headed back out like lightning.

My heart was pounding as I returned to the camera with less than a minute to spare before that first light burst upon the temple. I slipped the SD card in and closed the lid. I checked the focus and boom! There it came—it was 7:30 AM and the light hit the temple with that warmth that is characteristic in only those first few seconds. I shot as many shots as I could and felt incredibly blessed.

Sure, I would have liked some dramatic clouds in the western sky, perfectly illuminated by that morning glow, but I’ve made it my approach that I am grateful for whatever the Lord gives. Clearly, He blessed me with the desires of my heart and heard my prayer as He has hundreds of times before in my photography.

That picture is now the illustration for the spread opening the month of August in the new Nauvoo Diary & Weekly Engagement Calendar 2021. I encourage you to have this new engagement calendar and diary in your home and lives—it will help you immerse yourself in the history of the Church in this coming year of Come Follow Me study and help you step back in time to old Nauvoo.

If the display of my little iPad Mini-version is giving me an accurate version of the online web page showing your sunrise photograph of the Nauvoo Temple with background of the Mississippi River and Iowa bank and skyline on the river’s west bank, it appears you have also captured the final waning moments of another atmospheric phenomenon. It is popularly known as the Belt of Venus or antitwilight arch, and often goes overlooked because it is short-lived and easily obscured or hidden by tall trees that can block the true horizon as seen from ground level. It is visible only in the twilight moments in the west before sunrises and after sunset in the east. In your photo, there is the barest hint of blue right along the west-bank skyline, if my display correctly reproduces the image, that would then qualify the moment and view as the very last remains of a Belt of Venus. Which is partly defined as a pink or yellow-orange glow band above the horizon with blue lighting both above and below the pink coloration. Perhaps it is a small distinction in the big wide world of so many phenomena in the skies. But it is one that I see also from time to time in the Big Sky Country of Montana (due in part to our vistas that often lack close-by tall trees, both east and west of the Continental Divide of the Rocky Mountains) and I am always captured, as you were, by the beauty of the contrasting and ephemeral colors. Well done and thank you, Brother Proctor. —Cary Holmquist, Frenchtown, Montana. (P.S., I am looking forward to receiving the Nauvoo Diary soon.)

Randy, I was an account holder at that bank for many years so I felt okay about borrowing the roof for a few minutes long before they were open!