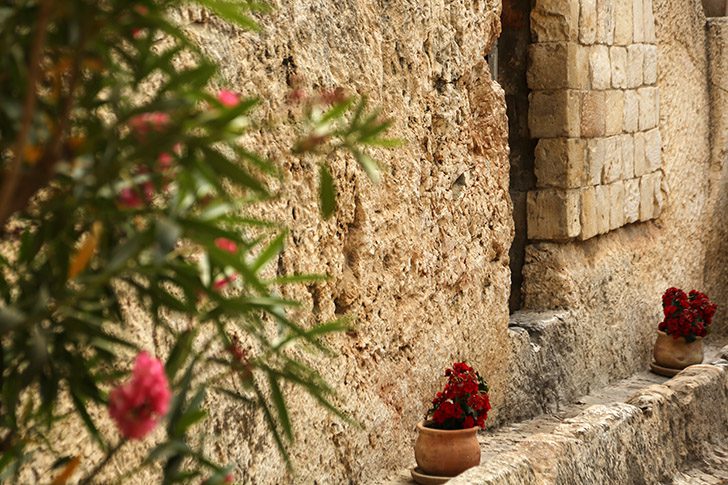 Meridian has been running a series of articles on the last days of Jesus’ life this week to celebrate Easter. The earlier articles can be found here.

While it was yet dark on the morning of Sunday after the crucifixion, Mary Magdalene and other women arrived at the tomb of Jesus to mourn and anoint with spices the hastily entombed body. To their utter surprise and sadness, when they looked in the tomb Jesus’ body was not there.

Mary immediately ran to tell Peter and John of their findings: “They have taken away the Lord out of the sepulchre, and we know not where they have laid him.” This news caused the disciples to run speedily to the tomb to see for themselves, “for as yet they knew not the scripture, that he must rise again from the dead.” As they looked in the tomb, something in John leaped with joy, and he “believed.” i

Yet he and Peter returned to their residences. As Mary and other women lingered by the tomb, “behold, two men stood by them in shining garments,” and “they said unto them, Why seek ye the living among the dead?” ii “Fear not ye; for we know that ye seek Jesus who was crucified. He is not here; for he is risen, as he said. Come, see the place where the Lord lay.” iii

As yet, Mary Magdalene did not understand the words of the angels, for her sorrow at the loss of her beloved Lord was so stinging. Mary turned herself away from the tomb and saw someone in the garden whom she did not recognize.

He asked her, “Woman, why weepest thou? whom seekest thou?” Supposing Him to be the gardener, she boldly said, “Sir, if thou have borne him hence, tell me where thou hast laid him, and I will take him away.” Mary’s love for the Lord was so powerful that she offered to physically take the body by herself and see to its proper burial.

Now came one of the greatest moments in all of history, for this man was not the gardener—it was Jesus Christ with a resurrected body of flesh and bone. And He made Himself known by simply calling her by name in tones so familiar: “Mary.” Now she saw, becoming the first witness of the risen Lord. Her tears of sorrow turned to joy as she exclaimed, “Rabboni,” iv which means “My beloved master.”

What joy to this woman and to all of humanity! “But now is Christ risen from the dead, and become the firstfruits of them that slept. . . . For as in Adam all die, even so in Christ shall all be made alive.” v Mary Magdalene reached forward to worship and love the Lord. Jesus said to her, “Hold me not; for I am not yet ascended to my Father.” vi

When Mary told the apostles that she had seen the living Lord, her “words seemed to them as idle tales, and they believed them not.” vii Later Jesus appeared to Peter, His chief apostle, who perhaps may have wondered that the Master would ever again call him His servant. This was a day never to be forgotten.

Ancient witnesses declare its truth in the holy records, and witnesses today have it borne to their souls by the power of the Holy Ghost: “He is risen! He is risen! Tell it out with joyful voice. He has burst his three days’ prison; Let the whole wide earth rejoice. Death is conquered, man is free. Christ has won the victory.” viii

On that same day of resurrection, two of the disciples set out from Jerusalem to Emmaus, some five miles distant. Only one topic coursed between their heavy hearts: their hopes for a mighty Messianic reign now dimmed by their Master’s death.

In that late afternoon, another wayfarer joined them, Jesus Christ, “but their eyes were holden that they should not know him.” He asked them plainly why they were so sad. One of them, Cleopas, answered, “Art thou only a stranger in Jerusalem, and hast not known the things which are come to pass there in these days?” Jesus continued to query, “What things?” “And they said unto him, Concerning Jesus of Nazareth, . . . and how the chief priests and our rulers delivered him to be condemned to death, and have crucified him.” Jesus then began to teach them quietly and powerfully: “Ought not Christ to have suffered these things? . . . And beginning at Moses and all the prophets, he expounded unto them in all the scriptures the things concerning himself.”

Arriving at the village, they pleaded: “Abide with us, for it is toward evening, and the day is far spent.” As He dined at their table, He blessed the bread “and brake, and gave to them.” Perhaps there was something in His tender voice, or perhaps in the manner of blessing the bread, but in a moment “their eyes were opened, and they knew him; and he vanished out of their sight.” “Did not our heart burn within us, while he talked with us by the way, and while he opened to us the scriptures?” ix they recounted. Shouldn’t we have known?

Now these two hurried to Jerusalem and found the eleven apostles meeting behind closed doors, for fear of the Jews, and brought their glad tidings to them. “And as they thus spake, Jesus himself stood in the midst of them, and saith unto them, Peace be unto you.” As they gazed upon the Lord, they were

terrified, supposing Him to be a spirit. But He calmed them: “Behold my hands and my feet, that it is I myself: handle me, and see; for a spirit hath not flesh and bones, as ye see me have.”

The disciples yet “believed not for joy, and wondered,” but to further show them His corporeal nature, “he said unto them, Have ye here any meat?” x And they brought Him some food, which He ate before them all.