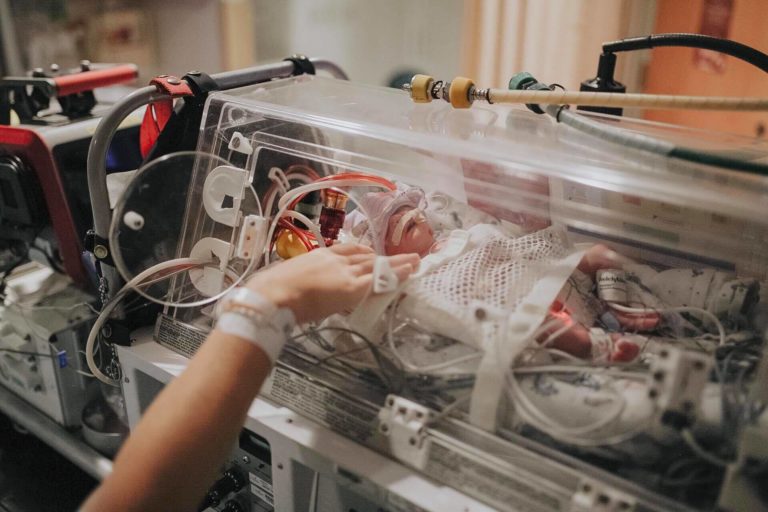 The Divine Timing of a Baby Born 12 Weeks Early

At 28 weeks and 4 days of pregnancy with her second child, Katelyn Vidmar was celebrating her first child’s birthday, which also fell on Labor Day. Her little family had decided to finish off what had been a wonderful end-of-summer day by walking down the street to a local park before John’s bedtime. On the walk back, Katelyn suddenly felt a sharp, and familiar pain.

That was a contraction. It wasn’t Braxton Hicks or practice labor. She knew that feeling. That was a real one and it left her confused. She had 12 more weeks of this pregnancy. It wasn’t even close to time yet.

She remembered what to do. “They tell you this at every OB appointment” she said, “go drink some water and lie down. So, I went and drank some water and l laid down, but [the contractions] kept coming five minutes apart”.

She called the on-call doctor and left a message, but without waiting for a call back, she knew she would need to go to the hospital. So, they loaded everyone into the car and headed off. Katelyn told herself, “oh, I’ll get to the hospital. They’ll give me some drugs, it will stop. We’ll come home. I might spend five hours in the hospital, but it’ll be fine.”

The nurse in triage seemed to agree. It was early, she seemed to communicate, it was probably all just a false alarm. But as the nurse went to perform a cervical exam, her whole face fell and her countenance changed. “I can’t feel your cervix,” she said, “I’m going to get the doctor and you’re probably going to have this baby tonight.”

That night they knew they would need a miracle, but the miracle they got was one they could never have anticipated.

“So, when are you going to have kids?”

Katelyn and Zac Vidmar had been married only a couple of months when this question came from a couple in their new student ward, who were expecting their second child and still in school. Katelyn had a goal to finish her undergraduate degree before she and her husband embarked on that new stage of life and besides, they hadn’t been married very long. When the other couple pushed for an answer, Katelyn said, “Well, I can’t have any.” The statement was an off-handed remark, an impulsive attempt to stop their persistent questioning.

But years later, after trying for month after month for a baby to no avail, she silently wondered if what she’d said was true.

After a year and half of trying, the Vidmars decided to see a fertility doctor. The doctor put them through a battery of tests. Everything appeared to be normal. Katelyn was put on a few rounds of Clomid. Nothing happened.

Life took them to Seattle, they found a new fertility doctor who ran his own tests and said that the other doctor had missed every indication that Katelyn suffered from endometriosis.

She was recently acquainted with this condition; a disorder where the tissue normally lining the inside of the uterus grows outside the uterus and in places it shouldn’t be. Katelyn’s sister Elise struggled with it also, having been diagnosed only a few months before.

A surgical option existed for Katelyn. Something that would hopefully open the way to becoming pregnant. She had the surgery and was put back on Clomid, a lower dose this time. Again, nothing happened.

By the time they moved back to Salt Lake City, they’d been trying for a baby for three years.

Knowing that she had endometriosis, Katelyn didn’t find a new fertility doctor right away. She had a sort of answer, it was a condition with a name and she could take that and run with it.  She attempted to mitigate the problem on her own with various health programs and even homeopathic approaches.

But soon she found herself in the office of yet one more fertility doctor.

This time, her husband was tested and they found that both of them brought an element of infertility to the attempt to have children and as such, the only way to get pregnant without a donor would be through IVF.

It seemed this was their only chance and it was a chance they were going to take.

At the beginning of the IVF process, a patient is given a two-week course of shots to stimulate the ovaries to produce a lot of eggs at one time. Right before ovulation, the doctors do a surgical procedure to go in and remove all those eggs.

Katelyn and Zac had 16 eggs removed, 12 of them were successfully fertilized and of those, five were viable.

They chose to transfer one embryo. Though IVF only has around a 30% success rate per attempt, their little embryo became a pregnancy and that pregnancy brought them a long-awaited, beautiful baby boy who they named John.

As John grew, they began to hope that he could have a little sibling. When John was just over a year, they embarked on a second journey with IVF and Katelyn found herself happily and miraculously pregnant again.

She dutifully took the required progesterone shots through her tenth week of pregnancy at which point she could graduate from the infertility clinic and visit a regular OBGYN. She was past the scariest part, she thought, she could join other pregnant women at a normal doctor’s office and commence her normal pregnancy.

And by all accounts, it was normal. Katelyn was healthy and strong and so was the baby and they were both free of complications. Their baby girl was growing on track and there were no red flags.

Her sister’s journey with endometriosis had had a different outcome. Elise’s case was severe enough that it required a full hysterectomy and her path to another child would require adoption.

On the night that Katelyn unexpectedly began feeling contractions that were coming sharp and fast and much too early, Elise had been waiting almost two years since beginning the adoption process to have a baby in her arms. Each year required another home study, more probing, official questions about their finances, the state of their marriage, their plans for the future.

Just hours before Elise came to the hospital to be with Katelyn and support her through her early labor, she had returned from a trip to Wyoming to confirm plans to adopt the as-yet-unborn baby that was still a few weeks away.

Meanwhile, Katelyn’s life was feeling more and more like a medical drama. Doctors and nurses were rushing around her. She was put on steroids to help the 28-week-old baby’s lungs and various other drugs to try to slow Katelyn’s labor and stop her contractions. When they came to see if it had worked, she was fully dilated and the life flight they had prepared to take her to another hospital with a NICU was now waiting to take her baby instead.

She was wheeled into an operating room for a c-section. The baby was so early, she was still breach. And nearly as soon as she was gone, Elise’s phone began to ring. It was the birth mother in Wyoming. She too was in labor. She too would have that baby tonight.

“What was going on in Heaven?” Katelyn said, “it’s like they said, ‘I’m not going unless you go’”.

Sure enough, at 11:51pm on Labor Day, Evelyn Kate Vidmar was born, weighing in at 3 pounds 1 ounce and just 40 minutes later, her cousin Isla Elizabeth was born.

“Having a baby at 28 weeks is really scary,” Katelyn told me, “You’re going through your head, ‘this is really early. is she going to be ok? Is she going to have any health issues? Are they going to get her stabilized? Is she even going to make it?’ So, you’re going through all this stuff in your head. But in that moment, when I learned that my sister’s baby had also been born that night, it just brought a lot of peace to me.”

“It just made it feel like—for some reason—that this was the plan. That that was how it was supposed to happen. These two girls are supposed to be a part of each other’s lives. For some reason, Evelyn had to come early. Who knows why they had to come the way they had to come. But in that moment, it brought a lot of peace knowing that they were going to be these two little cute girl cousins that will hopefully be able to be friends their whole lives with a really unique birth story that’s intertwined.”

These two sisters had received a blessing that was long-awaited for each in the very same hour. The peace that this incident of divine orchestration brought to Katelyn sustained her through the difficult days that would follow. Little Evelyn would have to stay in the NICU for 73 days. She didn’t have any major health problems, but she needed to eat and grow before she would be big enough and strong enough to come home.

Evelyn returned home one week before Thanksgiving; one week before her actual due date, weighing in at 7 pounds 3 ounces and ready to get to know her big brother whose birthday he now shares with her.

Reflecting on the experience, Katelyn remarked:

“But having that story of Isla and her adoption being so close, that helped bring a lot of comfort. You just have to take a step back and a deep breath and remember that I don’t know all the answers, but I do know that they were meant to be together. For me, I just can’t argue with that.

“I had no control over that situation and she was supposed to come at that time.

“There are just little things that happened, little miracles that happened throughout the whole process that just remind you that Heavenly Father is really in charge of it all.”

Sometimes when it feels like things aren’t working at all, the Lord finds a way to show you that they’re actually working perfectly and you are still in His capable and loving hands.

What a blessing this family received. I gave birth twice to premature babies...once in 1962 and again in 1966. At a little over 2 pounds, neither survived more than a few hours. Thankfully, medical advances have come a long way since then. I'm so grateful many babies now survive what used to be impossible odds!

I love this story! God most definitely have a plan and it’s always his time, not ours! If you just be patient and wait he will always reveal things to you, but only in his timing! I’m so happy everything worked out and they both were truly blessed! God is the Aloha and the Omega! We must always remember that!