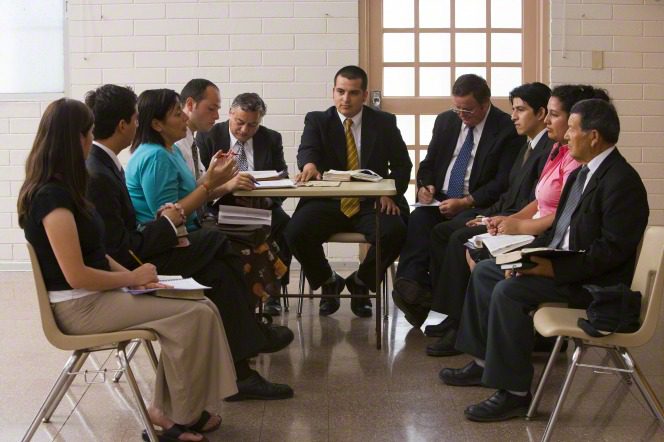 Teaching One Another the Doctrine of the Kingdom

“And I give unto you a commandment that you shall teach one another the doctrine of the kingdom.” (D&C 88: 77)

After I welcome everyone to Gospel Doctrine class and invite our visitors to introduce themselves, I announce that D&C 88 is our text for the day and then split the class into small groups to discuss it. That is when I get “the look.” For most, it is a side-glance, a kind of covert condemnation of this departure from the usual Sunday School routine. But for others, it is more of an overt challenge. “Oh, so did you not prepare a lesson this week?” a friend of mine asks, half-jokingly. I glance down at my notes—nine pages of typed material relating to every possible direction the discussions could go. “No, that is not it,” I respond. “I just thought we might try learning from each other today.”

He stares at me, unconvinced. I hand him a set of questions, appointing him the de facto leader of his group. He looks the sheet over. The questions are not overly difficult or challenging. However, they do concentrate on one verse in section 88 and encourage the group to read it carefully, consider its context, and look at it from several viewpoints. Suddenly, my friend’s face brightens.

“Oh, so this is one of your rabbinic things,” he says with emphasis.

I smile and continue passing out the other sets of questions to the other groups, each set focusing on a different verse. My friend is, of course, correct. This approach is not unique to Jews but it is definitely rabbinic—and it is extremely appropriate for Section 88.

“Teach ye diligently and my grace shall attend you, that you may be instructed more perfectly in theory, in principle, in doctrine, in the law of the gospel, in all things that pertain unto the kingdom of God, that are expedient for you to understand.” (D&C 88: 78)

Teaching to be instructed is at the heart of a rabbinic approach to scripture. Yes, rabbis are well educated and consider themselves primarily teachers. However, all the rabbis I know are also students, people who continually study the Scriptures and who consistently present their ideas, even from the pulpit, as part of an ongoing discussion, a conversation, really, that welcomes comments, clarifications, and even corrections from others. They recognize that with the Scriptures there is always more to learn, and that other people, regardless of their training, often have something important to teach them. As Rabbi Simeon ben Zoma, an ancient Talmudic sage once said, “Who is wise? He who learns from all people” (Pirke Avot 4:1).

And such an approach is well-suited to our small, university-oriented ward. As I look around the chapel, I see undergraduate and graduate students from many fields, all eager to share their new-found knowledge. And then there are the non-students too—coaches, dancers, programmers, small business owners, nurses, technicians, school teachers, as well as stay-at-home parents—similarly ready to impart their insights, ideas gained from years of practical experience and diligent study of their own.

Some are new converts; some are lifers. Some have served in high-profile church positions; some have served more quietly, less visibly in other ways. Rather than pontificating from my limited experience, I see that I serve this diverse group best by functioning more as a discussion leader, someone who can tap into their vast reservoir of knowledge and experience and enable them to pool their wisdom and knowledge for everyone’s benefit—including my own.

“Therefore, verily I say unto you, my friends, call your solemn assembly, as I have commanded you. And as all have not faith, seek ye diligently and teach one another words of wisdom; yea, seek ye out of the best books words of wisdom; seek learning, even by study and also by faith.” (D&C 88: 117-118)

To get the discussion going, I have included in their sheets quotations concerning the historical context of Section 88, especially its role in establishing the School of the Prophets. However, as I walk about the chapel, I not only hear discussions about that famous educational institution, but I seem to see it in action—people huddled together in groups of four to six, relating personal experiences, offering individual revelatory insights, and drawing upon an amazing array of resources, some of which are known to me and some that are not. Certainly, they quote scriptural passages as well as conference talks and Ensign articles, but they also refer to college textbooks, academic lectures, and journal articles. Occasionally, I join in a conversation and offer some tidbit I gleaned from my own research, but I do so as a peer offering an opinion, and not as a superior furnishing the final answer.

After I have circled the room, I make my way up to the stand to look the class over. The similarity to a Jewish synagogue is striking. A synagogue is certainly a house of prayer and a house of fasting, but it is also a house of learning—very much so. Orthodox Jews, for instance, refer to their place of worship as a shul, a Yiddish word related to the English word school, and many a Conservative synagogue or Reform temple contains a special study hall called a beit midrash, literally “a house of study,” where Jews discuss the Scriptures in small groups, just as we are doing in our chapel.

“Appoint among yourselves a teacher, and let not all be spokesmen at once; but let one speak at a time and let all listen unto his sayings, that when all have spoken that all may be edified of all, and that every man may have an equal privilege.” (D&C 88: 122)

For instance, in the Torah class I attended at a local Reform synagogue, the rabbi would often start off much as I did, by diving right into the text. First, he would have someone read a verse out loud, both in Hebrew and in English, and then immediately ask the class what they thought of it. It was an extremely simple beginning, but it often produced a discussion so vigorous, so diverse, and so thorough that the rabbi frequently had to remind those in attendance to raise their hands before they spoke and to not engage in side conversations.

The key seemed to be that he focused on a small amount of text and encouraged everyone to say something about it. As a result, the group rarely covered more than a few verses in its allotted hour and a half and had not progressed beyond Leviticus despite meeting once a month for nearly thirty years. However, the point was not to “get through” a book, a chapter, or even a certain number of verses; it was instead to “get into” the Scriptures, to scrutinize them so carefully, so completely, and so lovingly as to not only understand God’s words but to hear his voice, as it were, through others. As Rabbi Chaninah, another Talmudic sage, stressed “when two individuals are engaged in Torah, the Shechinah [God’s indwelling presence] is between them” (Pirke Avot 3:3).

“See that ye love one another; cease to be covetous; learn to impart one to another as the gospel requires. Cease to be idle; cease to be unclean; cease to find fault one with another; … And above all things, clothe yourselves with the bond of charity, as with a mantle, which is the bond of perfectness and peace.” (D&C 88:123-125)

God’s indwelling presence? As a Sunday School teacher, I have no revelatory keys to see into my students’ souls; I do not know whether they are feeling the Holy Ghost today or not. However, as I listen to the brief summaries of what their groups discussed, I see signs of the Spirit’s influence.

Today, they genuinely listened to each other and responded with respect and sensitivity and honesty. Today, no one nodded in passive, dismissive agreement. Instead they actively prodded each other to explain their ideas, to expand upon them, and to explore them in a group setting where all can contribute and benefit together. Today they actually learned from each other—this diverse group of old and new members, young and old, easterners and westerners, academics and non-academics—and came together in the kind of love, equity, and charity that sainthood requires and Section 88 demands.

“Art thou a brother or brethren? I salute you in the name of the Lord Jesus Christ, in token or remembrance of the everlasting covenant, in which covenant I receive you to fellowship, in a determination that is fixed, immovable, and unchangeable, to be your friend and brother through the grace of God in the bonds of love, to walk in all the commandments of God blameless, in thanksgiving, forever and ever.” (D&C 88: 133)

And maybe that is the point of rabbinic-style small group discussion, in the end, the reason why Rabbi Tanhum told his students anciently that, “knowledge of the Torah can be acquired only in association with others” (Berakhot 63b). Sure, they could have studied the Five Books of Moses on their own and formulated brilliant individual interpretations as to just what it means to love their neighbors as themselves, to not lie to them or covet their possessions or bear grudges or slander or rebuke or cheat them (Exodus 20:16-17; Leviticus 19:13, 16-18; Deuteronomy 6:5). However, to fully comprehend these and other commandments, they needed actual neighbors, real people they were connected to who not only supply valuable feedback but who could provide a relational context in which the virtues of these ideas could be more fully explored, experienced, and enjoyed.

And as I watch my class linger in the chapel, long after the closing prayer, many of them smiling at the other, gesturing excitedly, their Scriptures open, their pencils poised—I see how Rabbi Tanhum’s statement connects to us today and suspect that fewer members of my class will give me “the look” next week, when we discuss the principles and promises of Section 89. At least I hope so.

“Behold, verily, I sat unto you, this is an ensample unto you for a salutation to one another in the house of God, in the school of the prophets.” (D&C 88:137)

A wonderful article about effectively teaching the gospel. Bradley Kramer practices what he preaches, walks the walk and talks the talk! He remains an exceptional teacher and eternal student! Loved his book "BEHOLDING THE TREE OF LIFE: A Rabbinic Approach to The Book of Mormon," by Bradley J. Kramer, Greg Kofford Books, $21.95, 225 pages (nf). Highly recommend it as well. Thank you Meridian for supporting such a knowledgeable fellow!

I would love to be in your class! Very well-written and very important suggestions and insights into how to effectively teach and learn. 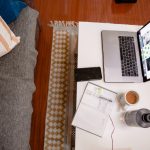 How Will Social Distancing Affect Our Need To Belong?