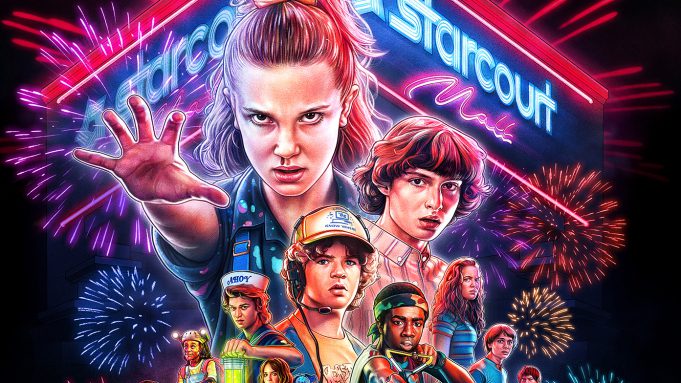 Perhaps you were one of the record breaking 40.7 million that watched some part of the newest season of the Netflix original series Stranger Things this past fourth of July weekend. Perhaps like me, you were even one of the record-shattering 18.2 million that finished the season within the first four days. Those numbers are somewhat mind-numbing especially considering that they represent the number of accounts not the number of individuals and we all know that each account is being shared by every random family member, a few of their friends, and a few of those friends’ dogs.

So, it was an incalculable number of people that got to see the introduction of a “Mormon” element into the world of 80s nostalgia, quirky characters, and monsters with vendettas that is Stranger Things as Dustin comes back from science camp with a long-distance girlfriend that lives in Utah. He ropes his friends into climbing to the highest point in Hawkins to set up his homemade radio tower to communicate with her, 1,500 miles away:

Max: You know, I’m pretty sure people in Utah have telephones.

Lucas: She doesn’t have electricity?

Will: What are Mormons?

Dustin: Super-religious white people. They have electricity and cars and stuff, but since I’m not Mormon, her parents would never approve. It’s all a bit … Shakespearean.

Author Jana Reiss published a commentary on this reference on the Religion News Service this week entitled “‘Stranger Things’ sees Mormons as ‘super-religious white people’”, which was then republished in the Salt Lake Tribune with “Sadly, that’s a bit too true” tacked on to the end as the (slightly condescending) revised headline. I found myself in pretty instant disagreement with the assertion that that was the primary takeaway from this brief television interaction.

It felt a bit like grasping at straws considering I watched the show and didn’t give a second thought to that offhand comment. I certainly didn’t assume that what one character says represented the opinion of the entire show any more than having a few likable characters that smoke should result in the headline: “‘Stranger Things’ sees Cigarettes as Cool Again”. In fact, I am quite sure that she is mistaken in saying, “I have a feeling that Netflix is receiving its share of righteous irritation from the Latter-day Saint community at this depiction of U.S. Mormons as ‘super-religious white people’” adding that she believed the offensive part to people would not be the part about being super-religious, but the part about being super-white.

The purpose of this article is not to rebuttal that one, but my knee-jerk disagreement with her point of view got me thinking about, not only what I think the reference does say, but what I think other references to Latter-day Saints in TV reflect about public perception of “Mormons” and whether that has changed at all through the years.

This is actually not the first time Stranger Things has featured a reference to Latter-day Saints. In season 2, the (then) new girl Max uses the excuse that she was talking to “Mormons” to hide that she has been in front of their house talking to a boy her controlling brother Billy has told her never to see again:

Note: this scene has some mild profanity.

Missionaries on the doorstep, anxious to talk, have always been an easy, go-to reference point for pop culture nods to Latter-day Saints. From Jim Carrey’s character opening the door to missionaries he is forced to say “yes” to in Yes Man to this colorful moment in the tenth season of The Simpsons:

In the past, perhaps the most frequent reason to bring up “Mormons” on TV has been to comment on the things that we can’t do. This season of Stranger Things takes place in 1985 and the fact that Lucas jumps to the conclusion that Mormons must not be allowed to use electricity is consistent with shows that were being made in the era like this well-known reference in a 1989 episode of Cheers where Sam mishears and continues to misunderstand Rebecca as she woefully asks, “Why [Mormons] can’t send flowers”:

Likewise, in 1985, Golden Girls featured an episode where a character in need of a kidney finds a donor and the best part of it is, the donor is a “Mormon” and all that goes with it:

“That kidney was showroom new. Why the wildest thing that ever passed through there was Ovaltine.” Though in this case it was something to be praised, the tameness and restrictive nature of the Latter-day Saint lifestyle has often been a bit of a fixation and the thing most commonly mentioned in television. If anything, it really was the “super-religious” part and not the “white people” part that seems to match the pop culture perception of the 80s.

Television in the early 2000s continued the trend with this moment from the 2001 episode of Friends where Rachel is trying to find a way to hide that she is pregnant from someone she is going on a first date with:

“Hey, what do you think is a better excuse for why I’m not drinking on this date tonight? ‘Umm, I’m a recovering alcoholic,’ ‘I’m a Mormon’ or ‘I got so hammered last night I’m still a little drunk?’”

For decades, Latter-day Saints have cropped up in pop culture as caricatures; part white-shirted salesmen, part teetotaling monks. But recently, I think we have entered an era of more nuanced references and portrayals and yes, that includes Stranger Things.

For example, watch this moment from the more recent Netflix original, The Santa Clarita Diet where a normal American mom and real estate agent has recently been turned into a zombie and she and her husband Joel are forced to hide the grisly remains of her first (accidental) kill:

Note: This scene features blood-spattered clothing, but no other violence or gore.

Sheila: Really? This is what we’re doing?
Joel: Okay, we say we came across this murder site and we’re just cleaning it up.
Sheila: Who cleans up murder sites?
Joel: I don’t know. We’re Mormons.
Sheila: Mormons don’t clean up murder sites.
Joel: Mormons are helpful.

Yes, finally, television references are beginning to shed a little light on what we can do, not just what we can’t.

Being helpful (see: developing charity, serving others), though still only mentioned in passing, is a public perception much closer to the heart of our religion than avoiding alcohol or having squeaky clean kidneys. Perhaps those Helping Hands in their bright yellow T-shirts have finally shown up to enough disaster sites to make an impression or perhaps people have noticed that missionaries will mow your lawn even if you aren’t willing to invite them in to teach you, but one way or another that Santa Clarita joke only lands if a fair amount of the viewership watching it thinks it’s true.

Indeed, I suspect that an article asserting that the primary Stranger Things season 3 takeaway on Latter-day Saints is whiteness or even extreme religiosity suffers a bit from confirmation bias or maybe the author was not among the 18.2 million that watched the episodes through to the end. Because—without spoiling too much—Suzie the Mormon science camp girl comes back in a crucial moment and though she is donning a very conservative nightgown (though not so cartoonishly conservative that I didn’t see my sisters wear similar ones in the 90s), what she is, is helpful; extremely helpful in a moment of greatest alarm.

Which is something I think we all hope to be.

Ultimately, how the media and pop culture talk about our religion matters considerably less than how we each individually live our religion and there will always be misperceptions, but I’m pleased to see that the television conversation about us is at least becoming more interesting. I hope that, little by little, the nuance of the references will increase and if that raises questions and viewers become interested in the answers?

We will be there to help.

Bonus (Partial SPOILER ALERT): Here is a magical moment between Dustin and his Mormon girlfriend that immediately became some viewers’ favorite scene of the whole season.

Celeste Mcclain expressed my feelings as an adult convert way more eloquently than I every could. Not a new me - but a better and happier me. Thank you, Celeste!