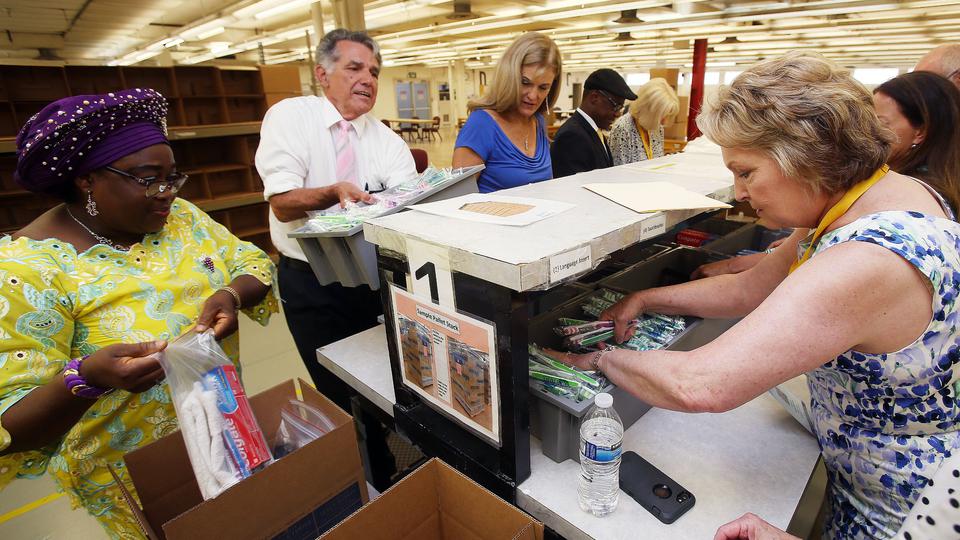 In conjunction with the National Governors Association (NGA) Summer Meeting this week in Salt Lake City, several spouses of U.S. governors toured the Humanitarian Center of The Church of Jesus Christ of Latter-day Saints and assembled hygiene kits.

“This is the time in the United States when we really need to pull together and bond together and find areas of common cause that we all believe in,” Sister Eubank said. “Service, especially after a disaster, is an easy time for us to pull together despite our differences and find things we can do together. Hurricane season is coming up. Fire season is upon us. We know we are going to need these kits. For representatives from different states to come together and put them together — that’s a really good symbol of this nation pulling together to help somebody in need.”

Utah first lady Jeanette Herbert said she hopes the spouses’ witnessing of the work done in the Humanitarian Center will spark more service in other areas of the United States.

“We are proud of what we accomplish [in Utah], but we want that to spread to other states, to all the other religions, that we come together as one and realize we all have so much in common,” she said. “It’s important as a community [to know that] one way to come together is to serve each other — it’s just at the base of everything. That’s the message I wanted to share with them. They loved doing the service project.”

Earlier in the day, Church leaders attended a governors-only breakfast at the Grand America Hotel. Elder Bradley D. Foster of the Seventy spoke briefly about the Church’s family history efforts and gave each governor in attendance a folder with their family pedigree chart, historical documents and unique public records about each governor’s ancestors.

In the evening, the governors and their spouses attended a 45-minute concert in the Conference Center from the Tabernacle Choir at Temple Square. Elder Ronald A. Rasband of the Quorum of the Twelve Apostles briefly spoke to the group before the choir favored them with patriotic songs such as, “The Star-Spangled Banner,” “America the Beautiful,” and “Battle Hymn of the Republic.”

This is the second time in eight years the NGA has held its summer meetings in Salt Lake City. In 2011, governors’ spouses participated in a similar service project at the Humanitarian Center.